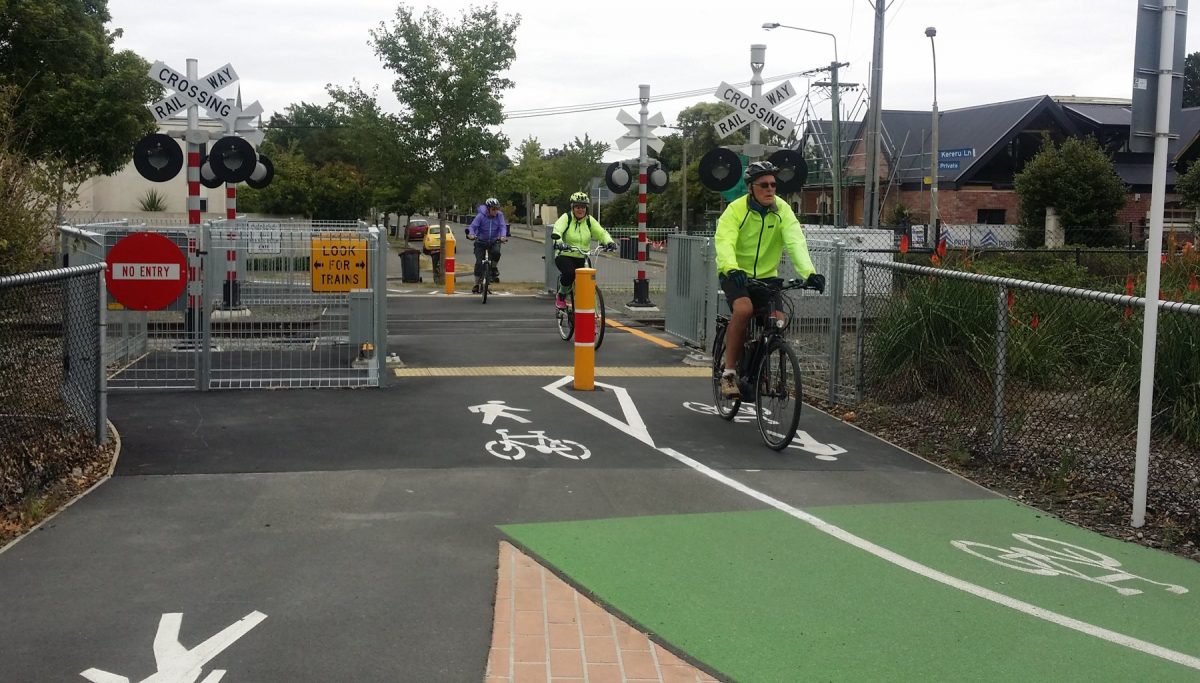 Another year over; time to reflect on what has happened cycling-wise over the past 12 months in Christchurch, since our last review. And what a crazy, wild ride it has been…

We’ll start with the good stuff. And for 2017 that means a lot of new cycleways. Four (count ’em) new Major Cycle Routes were opened this year, to all points of the compass, and a whole swag more consulted on.

By my count, over 13km of new or improved cycleways were completed in 2017, including 13 new or upgraded signalised crossings and an automatic railway crossing as well. Neighbourhood greenway sections of cycle route even featured 30km/h speed limits. We’re now starting to see the first hints of a ‘network effect’, where people can actually ride from one cycleway directly to another.

Some of the gaps in that network remain in the central city where we are still waiting to join some of the dots. But there are signs of progress there, such as along Manchester St and the East Frame. My favourite new link in town is the new path alongside Durham St and Cambridge Tce; very handy for getting across town. Nice to also see some more bike parking popping up around the city.

At the start of 2017, we also enjoyed the welcome arrival of the new Christchurch Adventure Park, and it was certainly a big hit. Then the February Port Hills fires struck and suddenly the jewel in the crown was on hold. It was great to see the Park reopen this month, thanks to some super-human efforts by the park operators.

With a whole bunch of new cycleways and facilities, the next thing needed are excuses to ride them (actually you probably don’t even need that…). As always, there have been a host of great biking events throughout the year, particularly courtesy of the many great local cycling groups like Frocks on Bikes and Spokes Canterbury.

But October brought an even bigger reason to ride in the form of Biketober, the first ever month-long celebration of all things cycling in Christchurch. Over 60 different cycling-related events were held throughout Biketober, including 260 delegates from NZ and overseas descending upon Christchurch for the Asia-Pacific Cycle Congress, and nearly 4000 attending the first ever NZ Bike Expo. Many thanks to the numerous wonderful volunteers who helped to make Biketober a fantastic experience.

If there was a sour note in 2017, it was the rise of “bikelash”, i.e. complaints by businesses, residents, the general public, even some cyclists, as the reality of the new cycleways became apparent. This was not helped by the media’s apparent desire to make a “controversy” out of every half-story. No cycleway seemed to escape unscathed from some wrath, whether it was Papanui Parallel, Quarrymans Trail, Ferry Rd on the Heathcote Expressway, Rapanui, or St Asaph St (which threatened to become our own “Island Bay” saga). To their credit, City Councillors largely held firm in pushing through with cycleway plans or coming up with reasonable compromises.

Looking ahead to 2018, I suspect that we will be seeing more of the same on all fronts. The Quarrymans Trail is already under construction towards Halswell and will be joined in the New Year with work starting on the Heathcote Expressway and the next stage of Rapanui through to Ferrymead. There may also be a few more that can get started if the new Government follows through on stated intentions to continue the Urban Cycleways Programme. Ongoing works in the central city (notwithstanding their own controversies) also promise to provide a few more cycling routes at the end of it all too.

No doubt the new facilities will once again raise the hackles of various naysayers around the city. But the best answer is simply the growing number of people who are using the new cycleways as they come on-stream (even if some people still don’t believe anyone is using them…). There’s also a lot of interest in holding another Biketober festival later in the year, by which time there may be quite a lot of things to be thankful for…

Thank you for all your support and feedback throughout the year (and thanks for putting up with the unexpected mid-year hiatus when the technology gods abandoned us…). I look forward to posting further updates on what’s happening through 2018, and also strongly welcome your guest contributions too.

What was your cycling highlight of 2017?