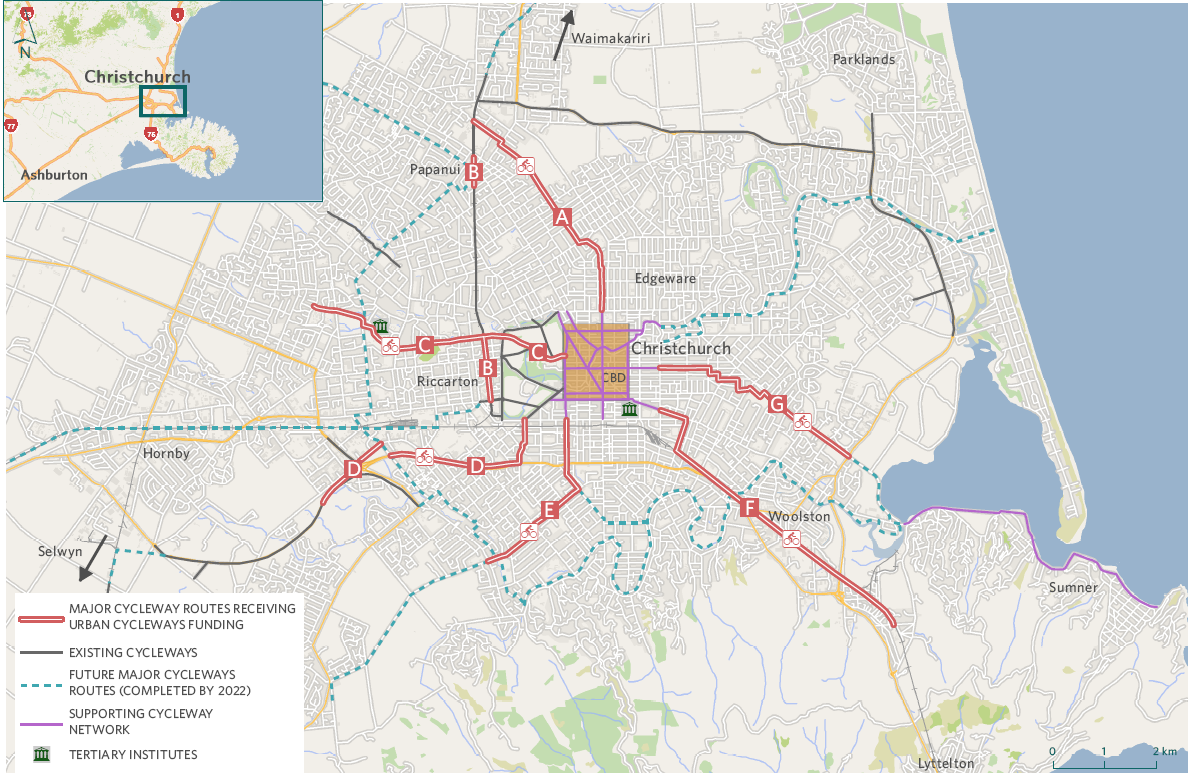 It probably felt like Christmas this week for many people who cycle in New Zealand (although they may have been surprised who Father Christmas was…). On Thursday, the Government announced the remaining allocation of projects for the $100 million Urban Cycleways Fund, and there were plenty of cities celebrating their success in receiving some of the funding. That included Christchurch, which received just under $20 million from the fund to go with the $1 million received as part of the initial allocation back in January.

Normally transport funding in NZ is shared approximately 50:50 between the local Council contribution and the Govt’s National Land Transport Fund (or 100% the latter if it’s a State Highway project). The Urban Cycleways Fund allowed Councils to access a third share of money; thus they could put in $1 million of local money and get funding for a $3 million cycleway project. Not surprisingly, interest in the fund was very hot across the country, with Councils scrambling to find their contribution in their budgets. I was privileged to be part of the Panel that oversaw the decisions on what to allocate money on** and there were a lot of very good applications received (more than could be funded). In the end, the $100 million Fund created a total of $333 million of local and Govt funding for cycleway projects over the next three years. That’s right – one third of a billion dollars for cycling…

(Not surprisingly, the curmudgeons have been out in force on social media, asking when cyclists are going to pay for these cycleways, will they stay off “their” roads now, etc. Aside from the usual misunderstandings about how cycleways are funded, there seems to be an obsession with the “lycra brigade” who I would have hardly thought are the target audience here. There’s also the local grumblers asking why we don’t repair the damaged houses first – quite how public money for transport can be spent on repairs paid for by private insurance money is beyond me…)

Locally, greater Christchurch has received ~$20.6m from the Fund, which will unlock ~$69.8m of cycleway projects in the next three years (this includes the $3.2m previously allocated back in January). Much of that is going towards seven Major Cycleway routes (see diagram), but there were also some tidbits for Selwyn District between Lincoln and Rolleston (announced in January and currently under construction) and Waimakariri District connecting Rangiora with Woodend and Kaiapoi. I should note also that the Chch Coastal Pathway was one of the projects placed on the “reserve list” in case any of the allocated projects nationwide fail to deliver in time.

We have previously alluded to some of the challenges faced by Christchurch in delivering their entire Major Cycleways programme. That challenge will now be magnified by having the whole country building new cycleways at an order-of-magnitude more than ever seen before. Not least of these challenges will be finding sufficient suitably trained and experienced people to plan and design all these cycleways to a good standard (and a “good standard” is what is being required for these projects, even if not always to the same best practice level that Christchurch is endeavouring to do). So some thinking is going on both locally and nationally about how best to ensure that these cycleways are delivered on time and “fit for purpose” (e.g. national guidelines and training, use of design reviews).

So, great news all-in-all for many people around the country. These cycleways will help to encourage more people who are currently “interested but concerned” to get out there on their bikes to work, school, shops, whatever, with all the economic/health/environmental/etc benefits that brings. And even the ones left driving will benefit from reduced traffic congestion – a win-win scenario.

**Not surprisingly I had to declare an interest when Christchurch projects were being discussed and let my colleagues lead the deliberations on those ones.

Which cycleway project in Christchurch are you most looking forward to seeing happen?

1 thought on “Money galore for cycleways”