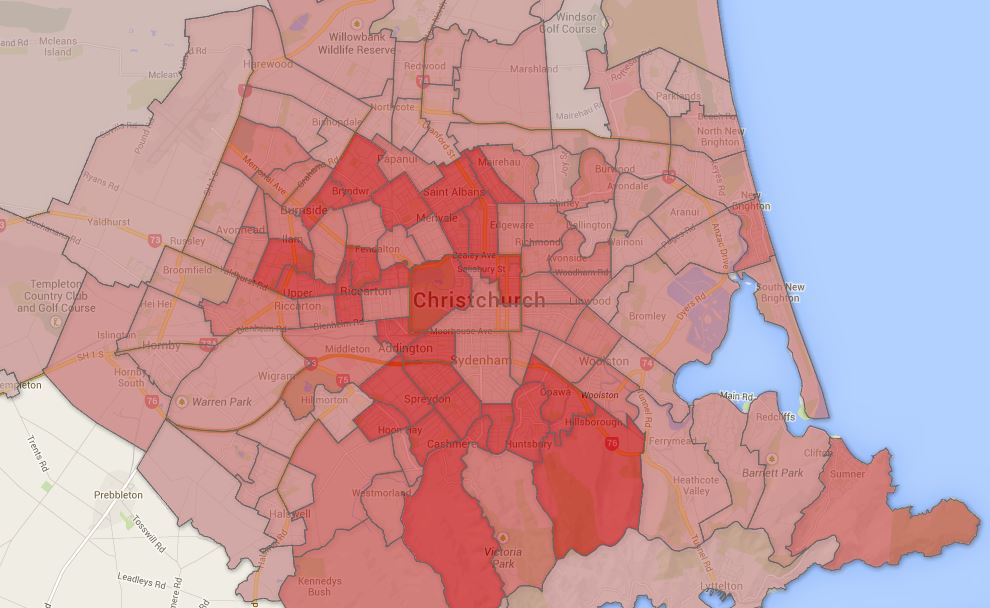 Last year, the long-awaited national Census was finally held. Now we are starting to see some of the results in detail, including information about travel to work. The full detailed regional results across the country won’t be publicly available for another couple of weeks, but Christchurch City has obtained the detailed breakdown of Census stats for their area and it’s available on the Council website.

In terms of cycling, the results are looking fairly positive. Cycle commuting in Christchurch increased as a proportion of all travel to work, from 6.5% in 2006 to 7.0% in 2013. In terms of absolute numbers, nearly 10,000 people commute to work by bike in Chch; that’s an increase of about 8% in cycle numbers since 2006. Still nowhere near the recent highs of the 1980s, but at least we’re heading back in the right direction.

It is important to remember that this is only part of the cycling numbers out there; National Travel Survey data indicates that ~50,000 cycle trips are made every day around Christchurch. This includes trips to study, shopping, recreation, and so on that are not captured by the Census.

Zooming in to a suburban level and Beckenham takes the honours of top cycling suburb in Chch. Nearly one-sixth of commuters from there travelled to work by bike on Census Day. I was going to list the top five statistical area units for you, but I think it’s worth acknowledging that actually quite a lot of the area units (typically ~1000-2000 residents each) achieved >10% bike commuting in 2013. So here they all are:

The Press provided a useful graphic where you can see the relative cycle-commuting strength of different parts of Christchurch City (although the percentages shown are wrong because they include those people who didn’t travel to work that day). There’s some evidence of proximity to the centre being a factor in high cycle commuting, with a bit of shift to the west and south that could reflect some of the recent changes to major employment centres:

Not surprisingly, the lowest performing areas tended to be further out. Some of the rural parts of Christchurch City (in former Banks Peninsula) even had zero people cycle commuting. But closer in, some questions could be asked about why the likes of Northwood (2.6%) and Parklands (3.1%) have relatively low cycling numbers.

If we look at the “Greater Christchurch” urban area (including parts of Selwyn and Waimakariri Districts) the average cycle commuting rate was 6.0%. Right across the Canterbury region, it was a commendable 5.5%, although it has to be remembered that Christchurch makes up more than 80% of that count.

Nationally the cycle commuting rate is up to 2.9% (or about 44,000 people) compared with 2.5% (38,000 people) in 2006. That reflects a 16% increase in cycle commuting numbers across NZ, so it will be very interesting to see where most of that increase has occurred. And with the encouraging signs of planned cycleway developments around the country, it may be the start of a great new trend.

Are the Census cycling stats what you expected?

4 thoughts on “Census: Cycling on the Rise in Christchurch”