Pay attention to some of the debates that occur in the media comments sections about cycleways and at some point a naysayer is invariably going to say that “[NZ town X] is not like Amsterdam!” Ignoring the fact that a few decades ago, Amsterdam wasn’t like Amsterdam either, what is the mythical cycle-heaven of the world really like? Pretty cool actually; certainly one of the few places in the world where you are in awe of the huge numbers of people biking. I was lucky enough to visit it seven years ago and posted about it originally in June 2015. So, rather than accepting defeat and walking away, I think the better thing to ponder is “how can we also be like Amsterdam?”

Five years ago, I visited Copenhagen for the first time and was blown away by the sheer numbers of people cycling. It was truly awe-inspiring to stand by a busy central city street and just watch the thousands of riders go by (on the busiest cycle streets there, that could be more than 20,000 cyclists a day).

Fast forward to my recent trip to The Netherlands and, while I saw a high proportion of people biking in every Dutch city I visited, I knew that for large absolute numbers I would require a trip to the largest city, Amsterdam. Given its reputation anyway (with over one-third of trips made by bikes, more in the central city), I think I had to see what the fuss was about.

The greater Amsterdam urban area has a population of 1.5 million, and is invariably regarded as one of the top cycling cities in the world alongside Copenhagen. Interestingly the biennial Copenhagenize index of the best (large) cycling cities has just come out and rated that the latter had jumped over Amsterdam to gain the top spot on its rankings (I suspect that many other Dutch cities would stack up pretty well too, but there is a general minimum size for consideration of 600,000 people). The chief difference it was noted was the much greater ambition demonstrated by the Copenhagen municipality to continue growing their cycling numbers by various means; Amsterdam was deemed to be “resting on their laurels” a bit. But they’re pretty good laurels to be resting on…

Like most Dutch cities, Amsterdam uses all the usual tricks in the book: separated cycleways, slow quiet streets, protected intersection crossings, etc. The additional challenge in some places is the extra pressure brought about by having a lot more bikes and motor vehicles in the same space (although of course again they try to discourage through-traffic on most non-arterial streets). And certainly parking doesn’t get any easier with that many bikes around…

One particular issue that is irking the Amsterdamers is the use of scooters on the pathways; the numbers are increasing and some of them were frankly far too fast when I was there. Amsterdam actually petitioned the Government to be allowed to remove scooters from cycleways, and that is now happening in some locations. Interesting to see a rising number of other diverse “mobility devices” on the pathways too.

Busy intersections can make for very long signal phasing times to allow everyone their chance. That can increase the temptation to jump the lights. To try to address this at some of the busier sites, countdown timers have been introduced so that people cycling know how long they’ve got until it’s their turn.

There are some lovely parks around Amsterdam and cycling routes certainly take advantage of these corridors. It is notable in The Netherlands that few places have shared pathways, and that includes the parks. Often the cycleway feels more like a normal road, with the footpath up on a kerb, or there are at least separate coloured surfaces. Mind you, we are typically talking about considerably wider pathways than that usually found in Christchurch. When we start to get the peak pathway numbers that Amsterdam experiences, certainly we will need to consider separation (if not before).

Again, there are so many things to see (I took over 200 photos), but here’s a snippet of some other interesting aspects:

So does Amsterdam live up to the hype? Well it actually gets a lot of serious competition from its smaller Dutch neighbours (some of which you’ve seen already; some I still have to show you), but arguably they have an easier job fitting bikes into the landscape when often there are fewer than 150,000 people to deal with. If you are comparing it to the many other “large” cities of the world (whether it be London, New York, Beijing, Auckland, etc) then it is certainly light years ahead of most of them.

What do you think of Amsterdam? 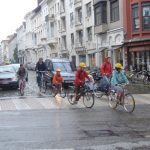