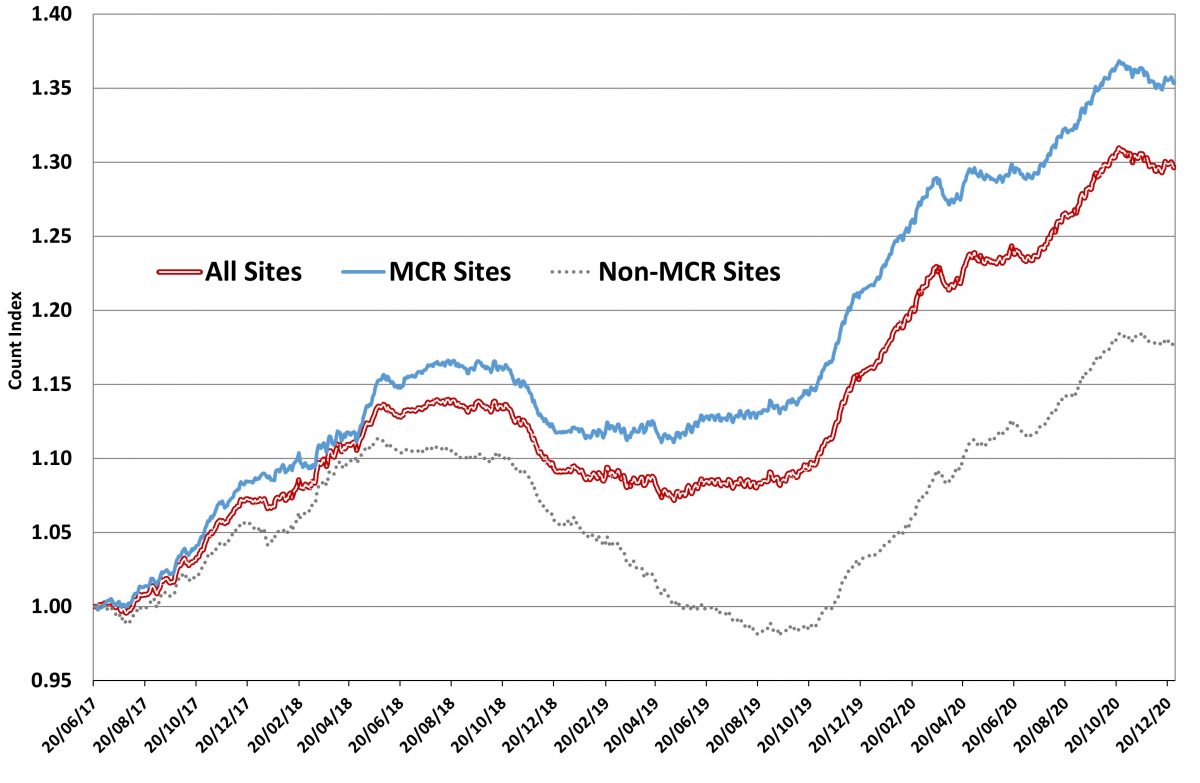 “Build it and they will come” – that’s what we’re regularly told about the magic of induced demand, especially for something like transport. It certainly seems to happen when we build additional roading capacity – what about when we build decent cycleways?

In Christchurch, we’ve been putting this to the test for the better part of ~seven years now, with a swathe of Major Cycle Routes and other cycle facilities being constructed in the post-quake rebuild. At various times, the work has come in for criticism for the amount of money being spent on it (never mind the $1.1 billion spent over the same period on motorways here…), the quality of the finished product, and whether it has made any difference at all to cycling numbers.

National data like the occasional Census and the ongoing Household Travel Surveys can provide some idea of changes in cycle numbers, but it’s a slow process to wait for the latest info. Fortunately, in Christchurch we also have access to a growing collection of automatic cycle counters scattered around the city that provide day-by-day updates of what is happening on the cycling front. You can easily access them yourself from CCC’s SmartView website.

Approximately 25 sites are monitored; some since about mid-2016, while the newest site (Charles St on the Heathcote Expressway) has been going for a little over a year. As well as showing each individual site, you’ll notice that there is also an overall count total lurking at the top of the map (telling us that last week, during the Xmas break, there were still over 30,000 trips recorded during the week). And clicking on any of these site spots gives you a more detailed breakdown of the count history – you can even download the data (click the button on the right of the orange box).

Great, so it’s simply a case of looking at the overall count data and seeing the change over time? Well it’s not so simple as that, for a variety of reasons:

(1) The first problem is that, not surprisingly, cycle counts vary from day to day, especially often between weekdays and weekends/holidays. This issue is easily dealt with by having a rolling 7-day average – which is why SmartView shows you 7-day counts (as well as a plot of the daily numbers).

(2) The next problem is that even weekly counts vary considerably throughout the year. Summer tends to be busier than winter, work/study weeks are busier than holiday periods, and of course periods of good/bad weather also influence things. The chart below from our busiest cycle counter illustrates the kind of variations you can see throughout a typical year (right now, over the Xmas break, is easily the lowest usage).

So it would be hard to look for a change in average cycle numbers between (say) July and February (perhaps after a new cycleway was built) while knowing that cycle counts typically drop away a bit over this period normally anyway. What’s the solution to this? Use a 12-month rolling average! That way you always have a complete year of data with all of its usual normal variations.

(3) The final piece of the puzzle is that the number of count sites has changed over time, as more of them have been installed. The (annual) average daily total of all count sites at the moment is ~9400 cyclists/day; three years ago it was only ~2500/day. Wow, what growth! Except that three years ago only 8 sites were contributing to that number; now there are 24. So we have to account for change in cycle numbers while also acknowledging the increase in places being counted.

The following graph illustrates the change in cycling numbers at each of the city’s count sites (for conciseness, just the site ID numbers are given; “*” is a Major Cycle Route site, “>” is a 1-way only count). Each site’s annual average daily count begins one year after it was first installed and monitored, e.g. site 38709 on University Drive (solid purple line) first registered data in July 2017, so we have a plot here from July 2018 onwards.

A graph like this has a lot to take in, and it’s certainly not easy to discern an overall trend over time. Some are going up a lot; some not much at all. The best way to get an overall picture of what is happening is to calculate an “index” that shows the relative change from one day to the next. Some simple rules were used:

With all that in mind, it’s then pretty easy to get an overall indication of how total cycling counts have been changing over the past 3 1/2 years, as shown in the next graph:

What you can see is that overall there has been a 30% growth in cycle numbers across the entire count network. Clearly driving this is the development of the Major Cycle Routes, as the counters along these routes have recorded a 35% increase over that time – basically 10% per year. Even the sites on non-MCR locations have seen some growth too though, with about 18% increase overall.

An interesting observation is that the growth hasn’t been constant; in fact there was a period between mid-2018 to mid-2019 when it was flat or even falling slightly (remembering that this data is actually capturing the average for the 12-month period before these dates). Meanwhile, either side of that was some very rapid growth in numbers. It might be worth trying to correlate some of these trends with when certain bits of cycle infrastructure were opened (certainly, given the current rapid rollout of new cycleways, next year could be another one to watch too…).

The lingering question in the background is also: how has COVID-19 affected the numbers? Certainly during the lockdown period earlier last year, there were dramatic drops in cycle numbers along some of the key commuter routes into town. However, at the same time, some of the outer suburban routes recorded notable increases in cycle numbers, as families got out and enjoyed the quieter times. That is very evident from the multi-site chart above, where some sites dipped down during April/May 2020 while others jumped up. The net effect on the overall index was relatively little change during lockdown and then it continued to climb up again afterwards…

I know that some detractors will point out that these counters may pick up the same person more than once on their journey, so an average of 9400 recorded bikes a day across the city isn’t likely to translate to 9400 individuals biking that day. However, a lot of cycle trips in Christchurch don’t hit any of the cycle counters around town (case in point: my usual ride to work and back each day). The Census and Household Travel Survey data would indicate that over 50,000 cycle trips a day are being made on average, which shows you how much cycling happens far away from any of the counters. It would be silly not to expect that these numbers aren’t also growing as well… {P.S: scattered counter sites is how we also count motor traffic…}

So the take-away from the data story seems to be that cycling continues to be on the up-and-up here in Christchurch; great to see. I’ll continue to keep to an eye on how the numbers are tracking; it would certainly also be nice to see a few more count sites to fill in some of the data gaps around the city.

Have you noticed more people biking around Chch in the past few years?

8 thoughts on “Has Cycling increased in Christchurch?”