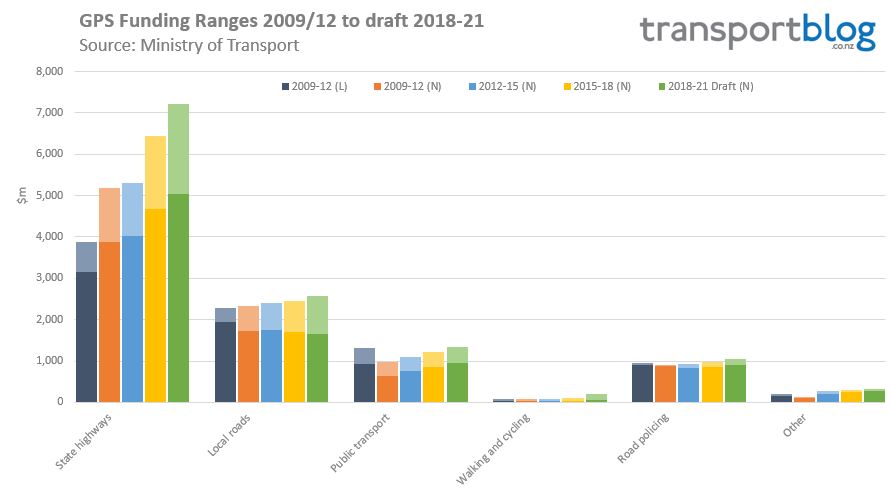 If you’ve ever wondered why it is that cycling only seems to get a pittance of the funding that roading does, it’s largely down to an innocuously named document called the GPS. No, it’s not about determining your location by satellite, the “Government Policy Statement on Land Transport” sets the plan for transport spending by central and local Government over the coming decade.The GPS is reviewed at least every three years, and currently the latest draft is out for consultation.

The GPS sets some big picture objectives for land transport and determines how much money should be spent in different funding categories (State Highway construction, public transport, walking & cycling, etc) – note that the GPS doesn’t deal with funding for rail, sea and air initiatives (so much for integrated transport planning…). Once set, it’s very difficult for the NZ Transport Agency and local councils to depart from the indicated expenditure ranges in the GPS, even if they’d like to. Well, actually councils can spend whatever they like on transport, but if they want to get a subsidy from Govt (usually about 50%), they have to toe the line regarding what funding is available.

So how does cycling fare? Historically, there was very little on offer for the active modes; for example, the original 2015-25 GPS had Govt expenditure of $15-33 million in 2015/16 for walking & cycling, rising up to $20-45 million in 2024/25 (go further back, and those numbers were even smaller). Just for context, that was out of $3400 million total land transport expenditure in 15/16, rising to $4400 in 24/25 – i.e. less than 1% of the total land transport spend. That funding got a boost when the Urban Cycleways Programme was introduced in 2015, which provided an extra $30 million/year from general Crown funds; but we’re still talking about less than 2% of all transport funding in total. Meanwhile the likes of new State Highways (think all of those very expensive Roads of National Significance) keep getting more and more funding every year (yes, some cycleways get funded as part of road construction projects too, but it’s still a miniscule part of those funding buckets). 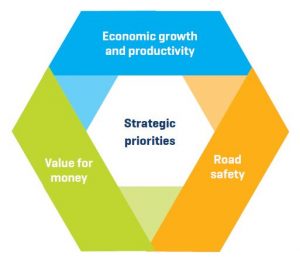 The Govt’s stated strategic priorities in the GPS are economic growth and productivity, road safety, and value for money. It is symptomatic of the blinkers the Govt has on that it barely acknowledges the role that cycling can play in supporting all three of these priorities (some mention is made of how walking and cycling can “increase the capacity of the network” to support the first priority).

However, cycling safety has been identified under one of the GPS’ Objectives, namely “A land transport system that provides appropriate transport choices”. Perhaps spurred on by the national Cycle Safety Panel work, a key stated result is “Increased safe cycling through improvement of cycle networks” (see detailed commentary below). They also acknowledge that perceived safety is the big issue; hence the focus on cycle facilities being rolled out around the country (hint: lower speeds would also help this!). 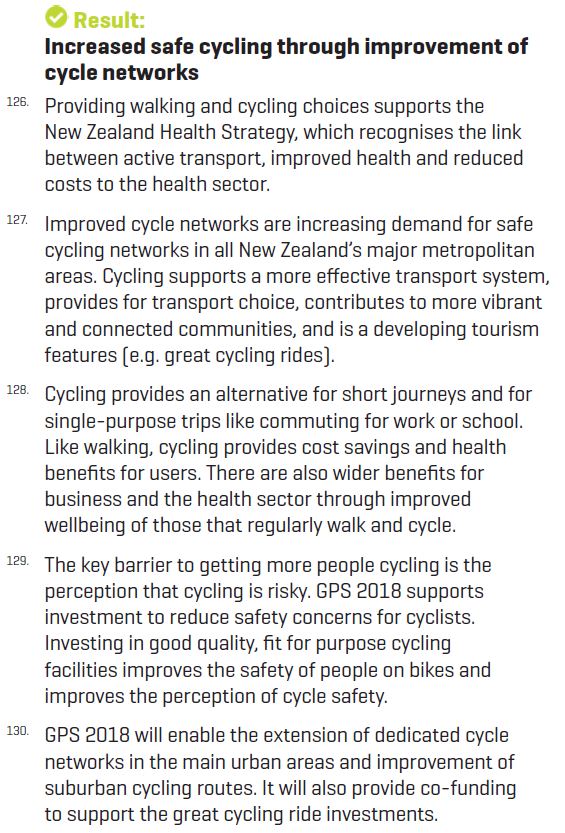 So what does the money for cycling look like? Well it very much depends on whether the Government continues with a similar Urban Cycleways Programme beyond 2018; given the vote-winning nature of this, I suspect we will see one proposed later this year. Hence the indicative ranges for 2018-21 are quite wide, ranging between $16 million and $65 million a year, depending on whether additional funding shows up (local Govt contributions would be on top of this; probably about $15-$30 million/yr). Considering that Christchurch alone is planning to spend about $25 million a year on average on cycleways over this period (and $45 million over the next year), it is clear how little is being invested in many parts of the country, even if the UCP continues.

But again, that seems to be quibbling about the margins when there are such huge dollars continuing to be spent on roads. By way of comparison, just one project like the recently started Northern Corridor expressway costs more than the planned cycling spend for the whole country over the next three years. That same pattern is repeated with numerous mega-roading projects across the country either underway or in planning. This is despite their often very poor economic benefit, typically struggling to even return $1 for every dollar invested. Contrast that with the demonstrated high economic benefits of cycleways – who’s really seeking “value for money”?

You have until 5pm this Fri 31st March to submit on the draft GPS. Historically, it hasn’t seemed like submissions have made much of a difference to past GPS documents. But one also suspects that if there was a change of Government after the next election, the funding figures would be likely to be changed anyway…