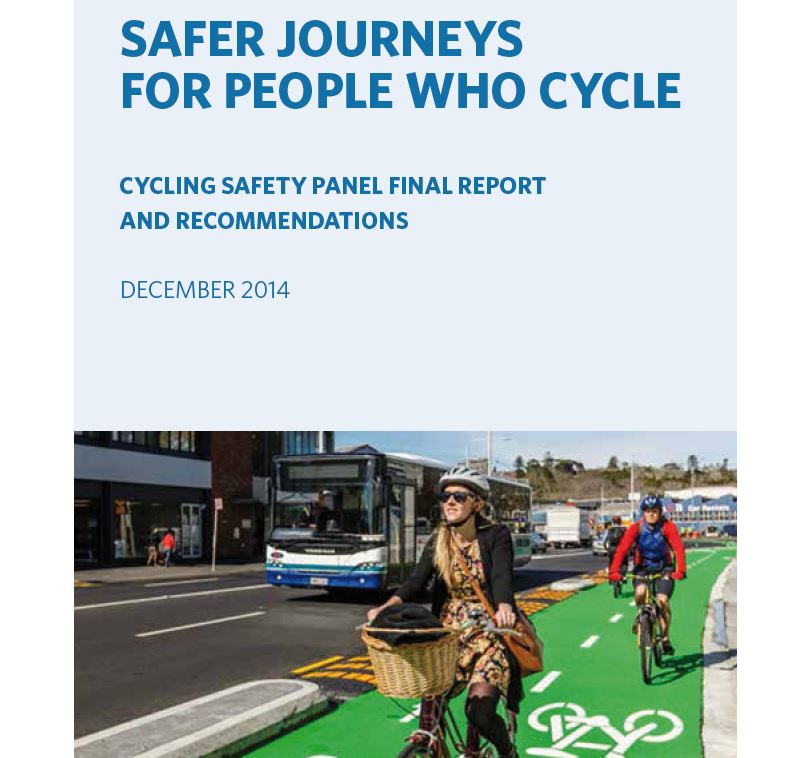 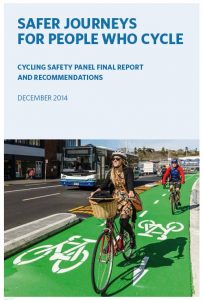 There wasn’t a lot of fanfare, but just before last Christmas the final Cycle Safety Panel report was presented to the Government. You will recall that this came from the national group of experts convened by NZTA and the Ministry of Transport to make recommendations aimed at improving our relatively poor record in cycling safety in NZ.

The final report identified 15 high-priority recommendations (and a host of medium-priority ones too) covering the range of possible approaches under the “Safe System” model. This included looking at safer infrastructure, safer road users, safer vehicles, and also more systematic things like better planning/policy methods and lower speeds (see list below).

And then we waited… and waited… to see what the Transport Ministers (Simon Bridges and Associate Minister Craig Foss) would say. It seemed to be an eternity before we heard any official word from Government about what they thought of it all. Perhaps it was all too difficult?

Finally, early this month, we heard back from Associate Minister Foss, saying that the Government is committed to delivering many of the Cycling Safety Panel’s recommendations (and indeed is already implementing many of them). However, the Minister requested that two of the Panel’s more contentious recommendations, mandatory minimum passing distances and mandatory side “under-run” protection (i.e. skirts) for trucks, have more investigation undertaken by the transport agencies, with findings due about mid-late 2016.

Of course, what got the most media/public interest (again…) was the proposal to introduce a minimum passing distance rule when overtaking a bike, as is common in many parts of Australia and the US. I’ll do a separate post on this at some stage to try to address the various concerns and myths about this, but it’s amazing how worked up some people get about the idea of either passing a bike with a clear margin or waiting behind until it is safe to do so. You can see why the Minister kicked this one for touch for now (and likewise for the under-run protection that has got the trucking organisations equally in a lather). Not surprisingly, some people (including the Green Party) are wondering why it has to take even further time to consider these recommendations, when a panel of experts has already spent half a year doing so.

Notwithstanding all this, what’s really important to appreciate is that since the final report was published (in fact, even before that) the NZ Transport Agency and MoT have actually been getting on and making progress on many of the stated recommendations anyway. In fact, cycling has been been made one of the top six strategic priorities for NZTA in 2015-19. This new priority is highlighted in the Cycling Safety Action Plan released by NZTA in August, which outlined a number of initiatives that the Agency is currently working on. These include:

To provide enough grunt-power for these initiatives, NZTA has bumped up its national cycling team from about “half a person” to a team of at least ten people now (plus various external consultants too). Led by Dougal List, the team is giving many of us faith that NZTA do mean business about making the country more cycle-friendly than before.

In less than a year we have already seen a dramatic shift in how NZTA tackles cycling across the country. In turn they are helping local councils and other cycling groups to do their bit for cycling too. It will be interesting to see what comes of the reviews of passing distance rules and truck safety equipment, but there’s plenty to get on with for now.

What do you think about the proposed recommendations and the Govt’s response?