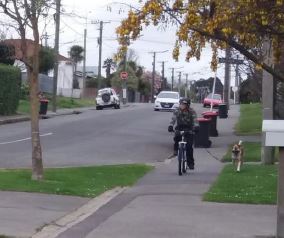 Three interesting research reports about cycling have just been publicly released by the NZ Transport Agency and already they’re causing a bit of a stir around cycling circles (and elsewhere…). We previously alluded to these pieces of work being underway, and their findings have some interesting implications for cycling policy in New Zealand.

{disclosure: I was involved in preparing one of the reports and peer reviewing another one}

Probably the one attracting the most immediate attention is the one regarding cycling on footpaths, partly because parliament is current reviewing the petition submitted last year to make it legal for kids under 14 to ride on footpaths (as well as their caregivers, and also over-65s and disabled users). The research report actually recommends allowing kids up to 12 years (i.e. under 13) and any accompanying adults to ride on footpaths (NB: it doesn’t mean they have to). Regardless of where you draw the age line exactly, this is certainly a topic that has polarised people. Not surprisingly, the main pedestrian groups are not happy, but it’s interesting to see that even cyclists are split on this topic – more confident riders in particular are likely to see the problems inherent in allowing footpath cycling while less confident riders see the footpath as a safer alternative.

The next report that has been released has investigated a minimum overtaking gap rule when motorists are passing cyclists. This was one of the recommendations to come out of the 2014 Cycling Safety Panel report and again has previously attracted considerable media attention. The research obtained some interesting real-world data from instrumented bikes, which showed that “close” passing manoeuvres are relatively uncommon (about 1 in 40 passes registering discomfort by riders) – not that this makes them any more comfortable when they happen. The research gave cautious support for an overtaking gap rule (with a 1.0m gap up to 60km/h and 1.5m over that) and recommended a trial implementation to see what effect it has. Hopefully any resulting implementation will include publicity that tackles all the usual myths and concerns that typically get raised.

The third report released has looked at a number of different road rules that affect walking and cycling to see if they could be changed. The six rules examined (many which are common overseas) were:

In all cases, introducing the rules seemed feasible and with relatively minimal impact on other users (indeed, a number of them would just be legitimising what most people are already doing). The side-road priority rules are probably the trickiest to implement in a safe manner, but probably also have the greatest potential to encourage walking and cycling by making it easier to develop good quality separated facilities.

There’s more to come too as additional research about e-bikes and other low-powered vehicles is just being finalised, and other work has started on perceived levels of service when cycling, and intersection interactions between motorists and cyclists. The challenge is now to turn some of these research findings into new rules, policies and practices that benefit people cycling.

What do you think of the research findings so far?