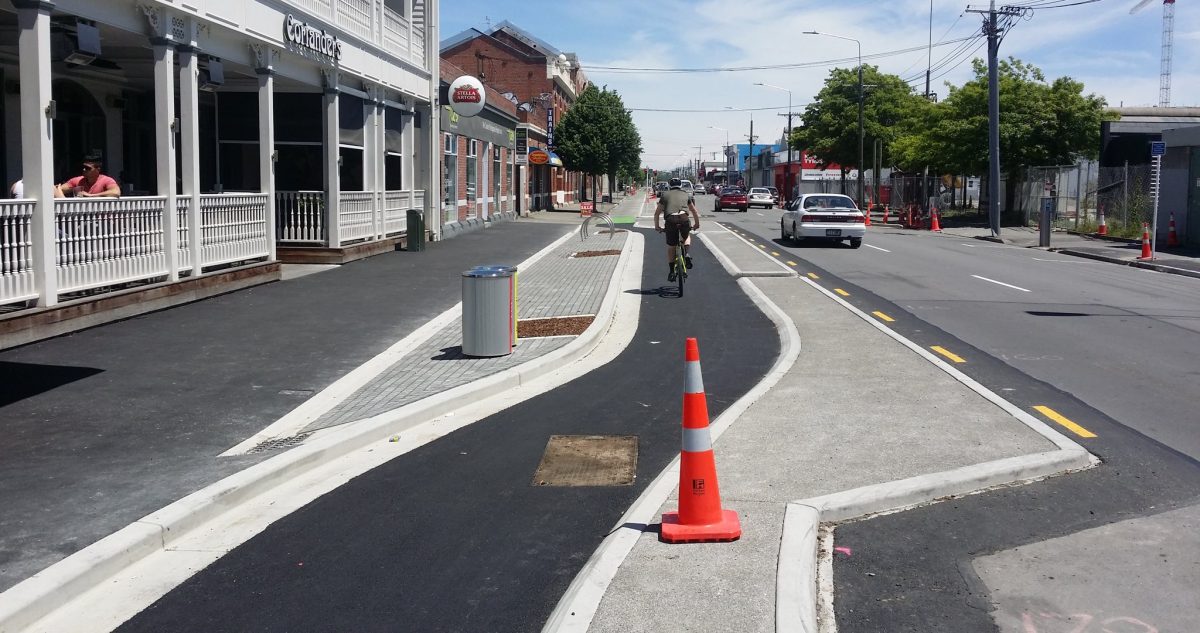 “Rebuild” – that term seems to have been in the local lexicon ever since the 2010-11 Canterbury earthquakes. And yet, more than ever, 2016 really felt like a year when the rebuild really was in full swing across Christchurch. I’ve enjoyed watching the remarkably rapid pace in which new and improved bits of the city seem to have popped up this year. There’s still plenty to go, but already we can start to envisage what the end product may look like.

That same thinking applies to cycling in Christchurch this year too. Again, the pace of cycleway constructions and consultations continue to accelerate, yet we also know that there’s a number of years of work still to come. It’s exciting to watch but, like a kid waiting for Christmas Day, also a little frustrating having to wait for the chance to try out the finished product.

Last year, we alluded to stuff happening as the mark of a good year’s work. 2016 has continued in the same vein, with at least a further 5km+ of new or upgraded cycleways completed (including five new/improved signalised crossings), a further four Major Cycleway routes currently under construction (with thirteen new/improved signal crossings), and a further four Major Cycleway routes recently out for public consultation.

Let’s not forget the other big “infrastructure” improvement this year; the introduction of a 30km/h zone in the central city. Despite the ongoing grumbles from some people, it heralds the start of a more cycle-friendly town centre. Good to see further low-speed proposals for a number of suburban centres and neighbourhood greenway routes in the pipeline. Hopefully lower speed limits will become more commonplace now.

The other big addition to the city’s cycling network is the new Chch Adventure Park, only a couple of weeks old. I haven’t had a chance to sample it myself yet, but early reports sound pretty positive (notwithstanding a few broken bones…). Looks like it will be a great attraction for locals and visitors alike – the next challenge will be to provide a better cycling route to the venue…

While the infrastructure went from strength to strength, there also continued to be a huge variety of cycling activities to entertain people every month. Thanks to the many people and groups who continue to offer bike rides, workshops, film nights, social get-togethers and other cycling-related events throughout the year. If you haven’t taken part in one of these activities yet, I urge you to make a New Year’s resolution to put a future event or two in your calendar and make a few new “bike-minded” friends…

What other cycling issues made an impact in Christchurch this year?

Thanks for all the many guest contributions throughout the year; they make my job so much easier and help broaden the perspective  of what it means to be cycling in Christchurch. Keep them coming, short or long, one-off or regular, we’ll look at them all!

Looking ahead to 2017, we can look forward to a number of current cycleway projects being completed in the early months of the year, with new ones starting later in the year. Again, lots of cycling activities are planned throughout the year; in particular, watch out for the Asia-Pacific Cycling Congress coming to Christchurch in October – a great programme of public events are being planned around this conference.

What was your cycling highlight of 2016? What are you looking forward to in 2017?