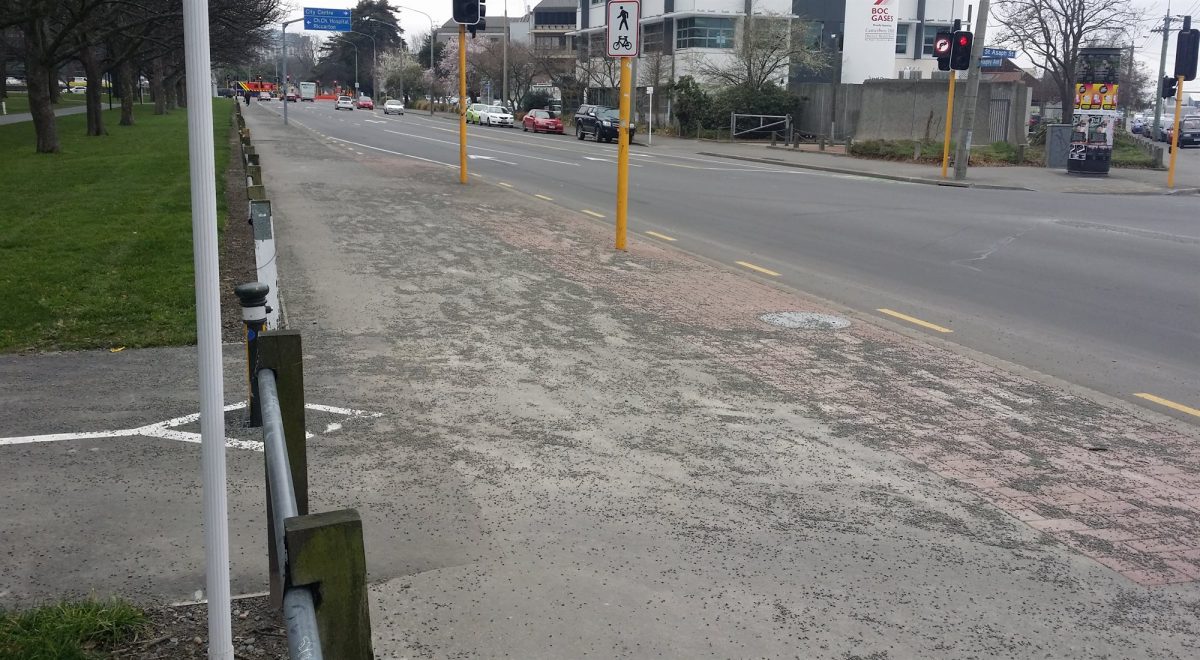 The first week I was back in Christchurch after my overseas travels was a bitterly cold July one, with lots of ice and frost about. The City Council’s contractors, to their credit, spread lots of grit down on the main traffic routes around the city, to minimise crashes. Fair enough, it’s important to be pro-active about those rare few days when black ice is a threat. The weeks went by and the immediate ice risk had well and truly disappeared – but not the grit. No, instead the traffic had progressively shifted most of it into the adjacent shoulders, cycle-lanes or pathways. In some cases you were just about swimming in it, trying to bike along areas like Hospital Corner, potentially a risky proposition. Weren’t the contractors going to come back and sweep up the excess grit?

This seems to be a common problem with a number of “routine” maintenance actions around the city. Clearly there is a system in place to introduce the grit (or cones, signs, barriers, whatever) in the first place when it is appropriate; what isn’t apparent is a system in place to promptly remove it once the original danger has passed. This is particularly an issue when detritus ends up being shuffled by the traffic into the cycling path. Likewise, when foreign matter such as snow, gravel, twigs, etc ends up on the streets (e.g. after a storm), it also tends to find itself in the cycling desire line before long.

It’s not just unscheduled maintenance works where contractors seem to “forget” about their leftovers. A few months ago, one of the roads near my house was being resealed with a chipseal. This consists of spraying bitumen on the road, spreading gravel “chip” on the surface, letting traffic bed it in, and then removing the left-over chip. Except that, again, the excess chip was just left there for ages to slowly accumulate on the sides of the road – and this is a route with kerbside cycle lanes. For at least three weeks it felt like trying to ride in a sandpit until (finally) the remaining chip was removed; shifting over to avoid it was not comfortable on a busy road. Surely if it is a known cycling route (hint: the cycle lanes give it away…) you should be more proactively managing the state of your road surface? 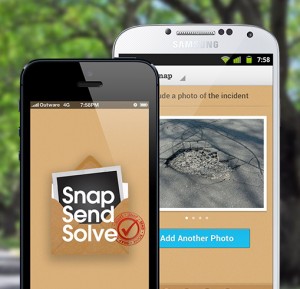 So, other than hoping that contractors will wake up to these issues, what can you do to alert the right people about these kinds of problems? We have talked before about ways to report maintenance issues here in Christchurch, and the City Council now has a new tool in its arsenal – SnapSendSolve. This is an online service (originally developed in Australia) that allows you to report a problem to Council via your smartphone, including a photo and GPS location. So you can do it right there on the spot while it’s fresh in your mind. Apps for both Android and Apple are available to download.

It’s not just road surfacing issues that you can raise using SnapSendSolve; already I have also used the app to report to the Council about cars parking on cycleway entrances, poorly placed path barriers, and incorrectly marked cycle detectors. You get an immediate acknowledgement by email and then (hopefully) some appropriate follow-up action or communication.

It’s a busy time of it maintenance-wise in a city like Christchurch, but part of being a cycle-friendly city is actively thinking about all road users when doing works on the road. And if they still forget, it’s good to know that there are ways for the average citizen to also let someone know about it.

Have you encountered “forgetful” maintenance problems around Christchurch?

1 thought on “Timely street maintenance is important for cycling”