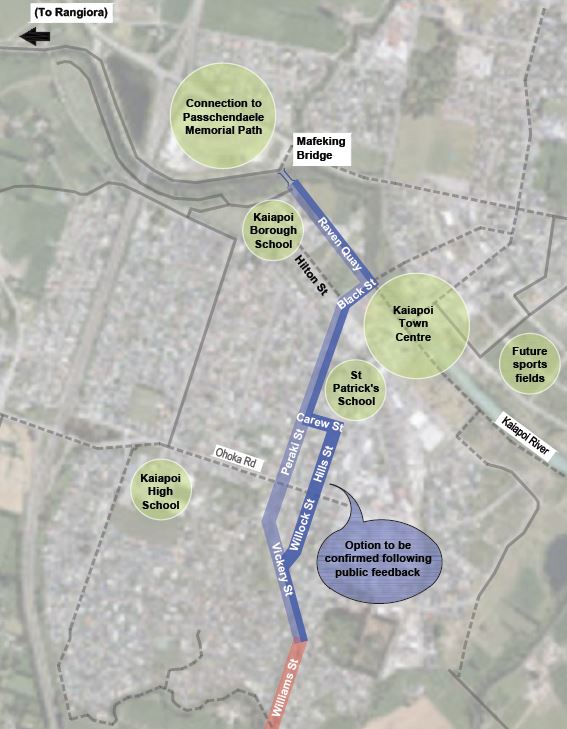 Previously we mentioned the progress being made to (finally…) provide a safe cycle crossing of the Waimakariri River as part of the Northern Motorway works. This new link then opens up the possibility of connecting Kaiapoi, Rangiora and further north by bike with Christchurch City. With that in mind, the Waimakariri District Council is now consulting on options for this link…

The new cycleway across the Waimak River will clip on to the eastern side of the motorway bridge. From there, some kind of route needs to make its way into Kaiapoi township and then from there towards the new Passchendaele Memorial Path alongside SH71 towards Rangiora.

The Council is proposing to create a link in two stages; from the bridge to Williams St in central Kaiapoi, and from there to the start of the pathway to Rangiora. Various route options have been evaluated against various criteria, with the best out now for consideration. NZTA are building the cycleway path from the bridge as far as Tram Rd (where new traffic signals will be introduced) and then the plan is to continue alongside Main North Road and Williams St into Kaiapoi via a 2.5m wide two-way pathway.

On the face of it, a 2.5m wide path doesn’t sound great, but then we probably wouldn’t expect huge cycle numbers using the inter-district connection any time soon. A bigger challenge might be how to even fit in a 2.5m path alongside Main North Rd, which doesn’t have a lot of spare shoulder space in the rural section – maybe it would be better to create separate facilities on each side? Once in the urban area, Williams St has more room to play with on either side, and a reasonable argument could be made that this section at least should be wider (3m?) to cater for the locals likely to use it as a cross-town link too.

Onto Stage 2: as Williams St heads into the centre of town it becomes more difficult to provide a cycle facility without removing car parking. So the preferred option is to use the parallel routes of Vickery and Peraki Sts to swing past town; again, there is a fairly wide shoulder to utilise for much of the way (or a wide existing roadway to narrow). From Fuller St (near the railway line), the cycleway can connect with the existing pathway that heads towards the Mafeking Bridge over the Kaiapoi River and onto the Passchendaele Memorial Path.

An alternative route is also suggested for part of the way, which uses Willock, Hills and Carew Sts; with the lower volumes, that route could utilise simpler neighbourhood greenway facilities instead. However, the Vickery/Peraki route is slightly more direct and probably easier in terms of minimising intersection treatments.

All up, this is a promising development to connect the dots of existing and planned cycleways north of the Waimak River. It might not be long before the inter-regional cycle network we were talking about a few weeks ago is a reality. As is often the case, the final details regarding path widths and intersection crossing details will have a lot to do with the usefulness and safety of the finished product. Some consideration probably also needs to be given about the best way to connect the cycleway to key surrounding destinations such as the high school and the town centre.

The current plan is to have designs finalised this year, with construction of the first stage into Kaiapoi completed by mid-late 2020. You have until 8am Mon 12th Aug to put in a submission, so have your say now!

What do you think of the proposed cycleway?

1 thought on “Have your Say: A new cycle connection to Waimak”