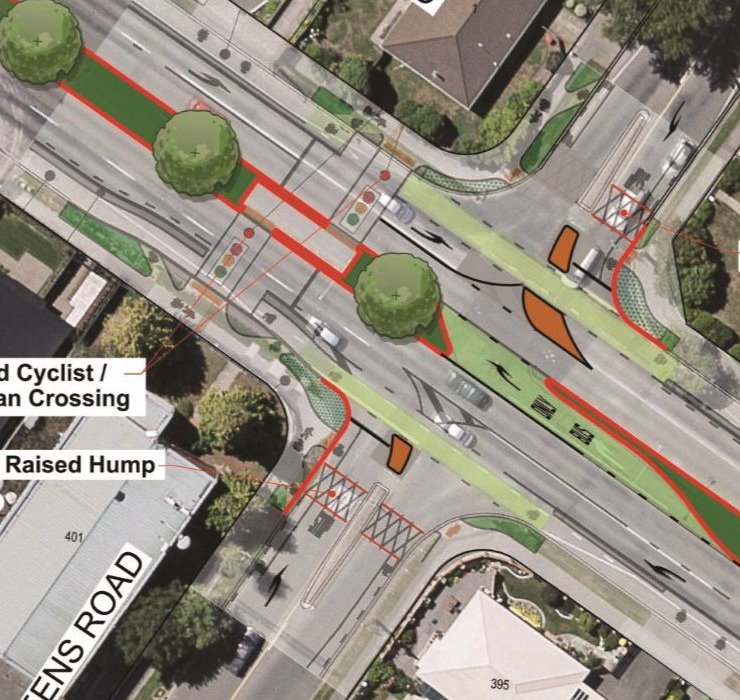 Currently out for consultation by the City Council are proposals for the Harewood/Gardiners/Breens intersection in the northwest part of the city. Some of you may have heard about this intersection, as it was a major campaign platform for Cr Aaron Keown at the last election and he has been pushing for its upgrade ever since.

Harewood Rd is a busy multi-lane arterial. At this STOP-controlled intersection in Bishopdale, there are problems for all road users trying to get across from Breens or Gardiners Rds. This is particularly an issue for those trying to get one of the nearby schools, like Breens Intermediate.

The City Council has looked at this site and found that it ranks well below many other local intersections in terms of crash problems (#61 apparently). Nevertheless, because of the weight of local concern, they have come up with a couple of options for people to consider:

While a number of people have previously called for a solution like Option 2, the problem is that it is a lot more expensive solution ($1.2m vs $0.4m) and potentially creates its own new problems (e.g. notable delays on Harewood Rd from all the extra signal phasing, no fully-protected pedestrian crossings). Because that extra cost hasn’t been budgeted in the Long Term Plan, it is not likely to get NZTA subsidy either.

From the perspective of walking and cycling, Option 1 solves most problems by providing safer crossing options for these modes (motor vehicles can U-turn from <200m away, by the way). It also creates a little bit of separated cycleway along Harewood Rd, in advance of a Major Cycle Route going through there. However, it is not perfect either, e.g. I question what looks like two separate staggered signalised crossings over a single through-traffic lane each, rather than a single crossing right across. I’ll let local resident Jan Jakob Bornheim give his thoughts on what could be improved:

“I am agnostic as to whether Option 1 or Option 2 is chosen. If Option 1 is realised, there are however a few things that I think should be kept in mind to make travelling easier. This would also help future-proofing the intersection for an increase in cycle traffic once the Wheels to Wings cycle way (which I wholeheartedly support) increases the number of cyclists in the area and potentially leads through the same intersection.

As a preliminary remark, I welcome the shared paths that will allow people on bicycles to reach the signalised crossing. I think their existence should have been made clearer on the consultation form, as they were not mentioned in the text and a dark grey bicycle “blob” on light grey surface is easy to miss on a plan. That being said, I think a few easy adjustments can make Option 1 much safer for cyclists.

First, to enter the shared path on the north side of Gardiners/Harewood, people on bicycles traveling southwest on Gardiners Rd would need a priority crossing to get on the shared path. This crossing should be designed similarly to the one on Hinau St close to Clyde Rd on the UniCycle cycleway. The shared path should also incorporate a sensor/diamond so that approaching cyclists trigger the lights in advance.

Second, similarly to the shared path on Gardiners Rd, the path on Breens Rd should also include a sensor for approaching cyclists to trigger the lights in advance. In an ideal world, the shared path on Breens Rd would again connect to a protected cycle-priority crossing that allows people on bicycles travelling south-west to cross Breens Rd. However, unlike the situation on Gardiners Rd, there is no interaction with traffic from behind and a person riding a bicycle can thus more easily see all other traffic they would interact with when crossing the road. The cycle priority crossing on this side is thus maybe optional.

On both approaches to Harewood Rd the short sections of marked on-road cycle lanes should make it clear that, by entering the shared path, one can follow the Gardiners Rd/Breens Rd route (for example, by painting “To Breens Rd/To Gardiners Rd” next to a bicycle symbol with an appropriate arrow directing towards the shared path). This way, people who do not commute on this route frequently can easily find their way across the intersection as well.

The lights [which are referred to as a ‘pedestrian light’ in the text of the consultation] should be a two-aspect cycle signal, provided this is permissible at the time the intersection is redesigned. If this is not possible, there should be a dedicated cycle light. This will additionally help to alert pedestrians to the (legal) presence of people on bicycles in the crossing.

I would add that the fencing on the island in the middle of the Harewood Rd need to be designed in a way that they can easily be navigated with a larger bicycle, e.g. a cargo bike. Narrow turns should be avoided. Finally, the traffic lights should incorporate holding rails for people on bicycles on both sides.”

Some good ideas there; what are yours? Submissions for this proposal are due by Mon 10th June, so have your say now!

What do you think? Do you prefer Option 1 or 2? Or something else?

3 thoughts on “What to do about Harewood/Gardiners/Breens intersection?”