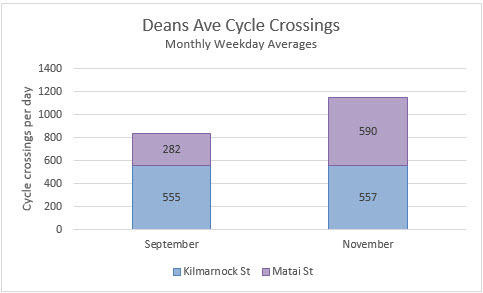 If you build it, will they come? That’s the question hanging over many new cycleway projects proposed in New Zealand. And when you’re talking about spending over $150 million on cycleways in Christchurch, quite a few people are interested in whether new cycle facilities will increase cycling numbers.

The City Council’s first efforts to answer this question have recently been released. Cycle counts were undertaken for the new Matai St cycleway and South Hagley Park pathway. And the results suggest that already a lot of people are taking advantage of these new facilities.

First let’s have a look at Matai St: The Council compared cycle crossing numbers over Deans Ave at both the existing Kilmarnock St signalised crossing and the new Matai St crossing. Between September (the month when Matai St first opened) and November there was a notable jump in cycling numbers on Matai St, while Kilmarnock St stayed constant.

Perhaps more people cycle in November anyway due to better weather? Possibly, although the data is still indicating that proportionately more people are starting to choose Matai St over Kilmarnock. To really have a proper before/after comparison you would need to count data at the same time of each year. Fortunately, that exercise has been done by Canterbury University researchers, who set up automated cycle counts at three locations between Hagley Park and Riccarton Bush for about eight weeks during September-November 2014 and 2015. The 2015 data is still being processed (we’ll report on the final results in due course), but already the 2014 data can give us some clues about the longer term patterns.

Preliminary results suggest that the Kilmarnock St entrance to Hagley Park in 2014 had ~560-570 cyclists/day in both September and November; fairly similar to what was seen in 2015. The likely better weather in November might be countered by the fact that university lectures have finished and so student riding numbers might be down by then.

(It should be pointed out too that these figures are 7-day averages, including the quieter weekend days – the working weekday counts are higher; typically closer to 700 cyclists/day)

What about Matai St? Although there wasn’t an equivalent count down at the new Matai/Deans crossing, there was one located at the Matai St railway crossing. Like 2015, this count did see a notable jump in 2014 figures between September and November – but the numbers we’re talking were only about 40/day vs 60/day! So the big jump in 2015 cycle counts at the other end of Matai St suggests a big improvement thanks to the new cycleway (unless all of the Girls High cyclists only come from one direction…). More will be revealed when the 2015 university data is finalised.

If we have a look now at South Hagley Park, an estimated 1400 people/day on bikes are already using the new 4m-wide shared pathway along Hagley Ave. Unfortunately I don’t know what the “before” figures were, but I do have some 2011 Council data showing that the entire Moorhouse/Lincoln/Hagley intersection (i.e. all directions) had ~1050 cyclists/day going through it previously. I’d credit a lot of that subsequent growth to the wonderful new signalised crossing of Moorhouse Ave.

The morning peak-hour flows along Hagley Ave are 130-150 cyclists/hour, at the same time that 40-90 pedestrians/hr are also using the pathway. Prior to its construction, there were concerns about the operation of this shared path, but the reality demonstrates that a suitable shared path with adequate width can work fine. The surveyors reported no particular problems observed, even during the busy times (and that’s been my experience too). As a result, very few riders are choosing to stay on-road.

So some early numbers are promising, and that’s before these facilities are fully connected elsewhere. For example, this year we will expect to see better facilities further west of Matai St towards Riccarton Bush and immediately south of Hagley Park into Addington and beyond. Both of these can be expected to improve further the numbers of people using the above routes.

Have you noticed more people cycling around Christchurch compared with previous years?