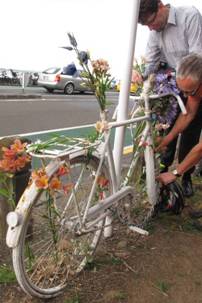 I’ve just had a week teaching up in Auckland, which is much more time than I usually get to spend up there. A lot of that week was spent inside presenting course sessions or listening to others. But I did get a few chances to look around and chat to some of the locals. We’re often regaled with stories about how auto-centric Auckland is, so it was interesting to see first-hand how things are currently.

I arrived on the Saturday and got into town from the airport during the closing stages of their first ever waterfront ciclovía. Just like our Open Streets last year, about 600m of the normally busy Quay Street was closed during the day to motor traffic, allowing people to bike, walk, play, whatever along this stretch and the adjacent waterfront area. Now, admittedly I turned up near the end when a lot would have been gone (and I know from the pics at CAA that many a good time was had earlier). But it did seem to me that many people were quite timid about getting out onto the street, whether on foot or bike. Perhaps this is what many years of motor vehicle dominance does to the human psyche? The circuit was also rather small (and still seemed to have many motor vehicles getting access to hotel, carparks, etc), but I guess sometimes it’s a case of baby steps…

To me this encapsulates the situation in Auckland at the moment – it is just beyond comprehension to most people (including many transport officials and politicians it seems) that cycling could ever be reasonably provided for in the City of Sails. So for now, it is largely just the “strong and fearless” who are taking to the streets, and of course they’re not many.

The classic Auckland arterial road consists of at least four lanes wall-to-wall, with not a hint of shoulder (let alone cycle lane) for cycling. So effectively you have to “claim a lane” if you don’t want to get squeezed by passing traffic. Sure, slowly some facilities are being added in where they can (for example, the six-lane monstrosity called Mt Wellington Highway down the road from where I was staying has plans to add some cycle lanes and paths). But this is only if they can add them without reducing road capacity. Actually removing a traffic (or parking) lane to provide for safe cycling space just doesn’t seem to be considered as a possible option, yet my gut feeling is that a number of the streets around Auckland are over-engineered for the amount of traffic (considering that nearly 30,000 vehicles along Riccarton or Papanui Rds seem to manage OK with just two lanes).

Another underlying problem is simply the sheer size of the city and hence the distances to get to places. It is not uncommon for people to commute >40km each way to get to work, and even 10-15km will seem like too far for most people to bike. What seems to be missing from that conversation is the fact that the nearest train/bus/ferry station may be only 2-3km away, a distance easily cycled in less than 10 minutes. We’ve discussed here before how bikes on buses can extend the range of your cycling trip, and better integrating public transport with cycling seems like the obvious way in Auckland to provide a viable alternative to the car. But to date, the signs haven’t been promising… Mind you, it’s just as bad for getting there on foot; in fact, I probably have more sympathy for those walking around Auckland than biking.

Recent cycling tragedies like John Tangiia, Jane Farrelly and Jane Bishop have become rallying calls for many in Auckland to highlight the decades of relative inaction. While I was in town, there was a memorial ride held to remember those who had passed away while cycling. Now I’m always a bit wary of highlighting events like these in the media, because I feel like the general public only ever takes a misleading “cycling is very dangerous” message from them. But for those who’ve lost someone dear, I get that it can be a way to help get through it all and hope that some good tangible improvements will come out the other side.

{BTW, that reminds me, if you haven’t already signed the petition calling the Govt to introduce legislation to improve protection for horse riders, walkers and cyclists (including safe passing distances), please do so!}

There is no shortage of pockets of sanity in the discussion world about encouraging more cycling in Auckland. Local advocates Cycle Action Auckland have a fantastic website/blog, the widely-read and respected Auckland Transport Blog regularly raises cycling issues, and “ginger group” Generation Zero have recently been making some very pointed promotions about cycling (or lack of) in Auckland. Even the local rag, The Herald has been upping the discussion about cycling’s place in Auckland, some of it good, some of it not so…

As we’ve highlighted before, there are bits of promising things happening around Auckland, including separated cycleways, off-road pathways and neighbourhood greenways. But the rate of progress has not been fast, especially given that their entire planned network is ~900km of cycleways and they’ve been struggling to roll out even 10km/year (it will be interesting to see how quickly Christchurch’s Major Cycleways actually see the light of day).

I don’t want to sound too pessimistic about Auckland (although it should make us appreciate a bit more the underlying base that we are starting from for cycling in Christchurch). The former NZTA Akld Regional Director Stephen Town (who made a lot of good progress cycling-wise during his tenure) is moving over to take on the reins at Auckland Transport (the transport arm of Auckland Council) and some knowledgeable locals I spoke to are quietly optimistic that this could help change the “culture” of how Akld Trpt deal with cycling. And some of the key groups like CAA and Gen.Zero have been asked to present their vision for cycling to the Board of Akld Trpt this month. Who knows; maybe that will mark the turning point for taking cycling seriously in Auckland.

What are your impressions of cycling in Auckland? How does Christchurch compare?

7 thoughts on “A Week in Auckland – Is there hope for Cycling?”