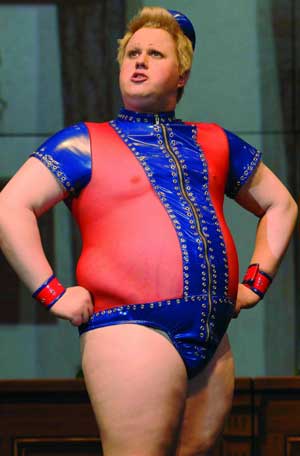 For some time now I have needed a new word. When I tell people that I ride a bike, they instantly think ‘Cyclist’ and imagine me in head-to-toe lycra – this is not a good thing.

I would not wish this on anyone and, being a lady of a certain age, I feel quite ‘undressed’ when this occurs. I have hunted in vain for a word to describe my reality

– I have tried ‘bicyclist’, ‘utility cyclist’, ‘transport cyclist’, ‘commuter cyclist’, ‘urban cyclist’ … I have even tried ‘cycling non-cyclist’, ‘person who just rides a bike to get from A to B’ and ‘lower case C cyclist’. None have worked for me. I either sound like I work for the electricity company, I’m a train-spotter with full-on fluoro, or I have simply lost my marbles!

In places like Copenhagen and Amsterdam, I am just a cyclist: a person who rides a bike. However, in places such as New Zealand, Australia and America, to name a few, ‘cyclist’ has a very different meaning. Languages evolve and diverge in different places. In the same way that ‘sick’ and ‘bad’ and ‘gay’ have completely different meaning in the 21st century than they did in the 19th century, the old meaning of cyclist has been forgotten and replaced with the new one in many car-centric countries. Should we try to go backwards and reverse this to the original meaning? Based on the success that I have had with my two teenage daughters (none), I think not!

I dream of the day that I can communicate my bicycle riding correctly, and I am not responsible for creating unnerving lycra-clad mental images (see above!). Last night we went to the Husband’s work ‘do’ and of course we cycled there. When this was revealed in conversation, the responses were the usual ‘that’s brave of you’, ‘you make me feel so guilty’ and ‘are you training for something?’ Cue the long repetitive explanation …

I have tried working with the existing new terminology of ‘cycle chic’ but this causes confusion as, in general, New Zealanders are not known for their elegance and sense of style. Stylish cycling is perhaps just that one step too far in our very nascent cycle culture. Indeed the national dress of board shorts, T-shirt and jandals is standard for most people, with perhaps a slight seasonal alteration to jeans, T-shirt and trainers in the winter, so the idea of riding a bicycle AND being stylish is an unlikely combination. The word ‘chic’ is also not a common one in these parts and is often mistaken for ‘chick’ and consequently ‘cycle chic’ is something that only girls do. I have also tried ‘citizen cyclist’ but that sounds a little communist in general conversation.

Having thought it through, I believe that creating a new word is the best option and quite a common solution when you look around. Dictionaries adapt to common usage, and languages such as French create new French words to accommodate new English words, rather than have their language diluted.

I needed a new word. One with a full range of derivatives to suit every occasion. One that rolled off the tongue and was built from connected words. That word is cyclopolitan – cycle (from the Latin cyclus, meaning “cycle”, “circle” or “wheel”) + politan (from the Greek Politan, meaning “city” or “Municipal”). To get your head around it, think cosmopolitan but with a bicycle; urban style, 21st century transport. It’s aspirational, it’s cool, and it’s very ‘now’.

I have used this word as the name for the new central site that houses the content pages that repeat on Cycling in Auckland, Cycling in Wellington and Cycling in Christchurch. So head over to Cyclopolitan.com and check out the full definition.

If you’re up for the challenge, see if you can use this word in everyday conversation. Report back on your progress and let me know if you find new and innovative ways of using it.