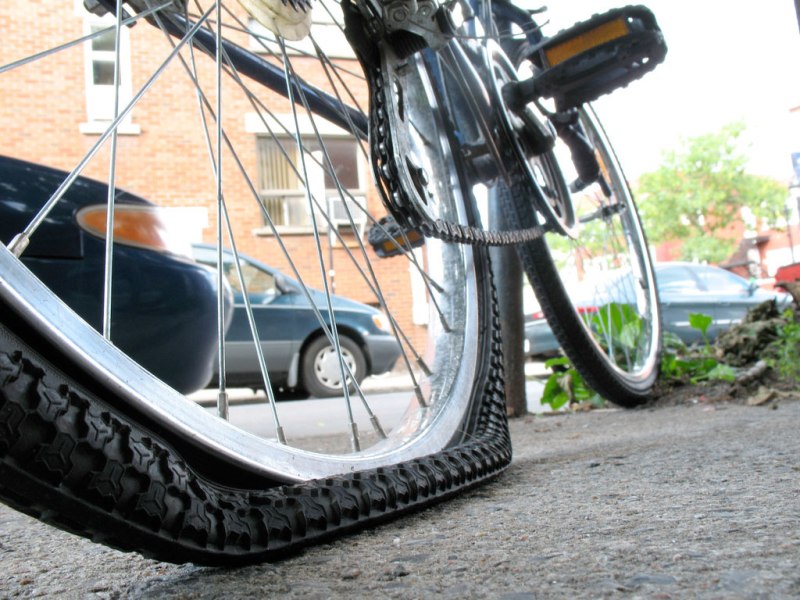 Some biking issues never go away; ever since Adam & Eve first rode a Raleigh 20 we’ve all suffered from the occasional flat tyre. So how to minimise punctures, and what to do if you do get one? This blogpost, originally from July 2013, gives you some advice…

It seems to be a perennial problem these days, the prevalence of broken glass (or other detritus) on the streets and the subsequent punctures that can result. It’s a pain for the amount of inconvenience this causes, so what can be done to minimise the problem? (or deal with it when it happens…)

Step one is to try to eliminate the source of the problem from the roads and paths. Christchurch City Council has a regular programme of sweeping main cycleways, but of course it can never be everywhere at once. If you see glass or similar hazards somewhere in the way of cyclists, contact the Council to get it removed (see our previous post about this). If there is a particular safety issue (e.g. forces cyclists to swerve into traffic), let them know too so that they can make it a priority to sort out; they’re usually fairly good in this instance.

Keep a constant look out for glass, etc ahead of you when you’re riding; this is where a sunny day or good bike lights can help make it “shine out” more clearly. Near a construction site, the culprit may be more likely to be stray builder’s nails or screws. If you’re leading some others on a ride and you see some hazard, make sure that you clearly point and call out so that the following crowd don’t plough straight into it.

Note that not all glass is the same when it comes to punctures. If it’s toughened “safety glass”, say from a car window in a crash, then generally it shouldn’t cause too many problems. The main risk comes from ordinary glass of the kind found in broken bottles and side mirrors, which typically produce more hazardous shards.

Just to confuse you, some of the fancy new coloured surfaces also incorporate crushed glass or similar shiny aggregates in them. So while you might think you’re approaching a sea of dangerous glass on that green cycle lane, the “sparkle” is probably meant to be there.

So, other than trying to avoid the glass and stuff, how else can you prevent punctures?

So if you do get a puncture, what are your options?

Now obviously if you’ve never tried to change your tube before or mend a puncture then some practice might be in order before needing to try it out for real in the field. There are a few fiddly bits to getting a wheel off from under the brake-pads and possibly a chain as well. Thankfully there are lots of helpful guides on the internet, like here and here. So study up and have a go; with practice, changing a tube can be less than 10 minutes work.

Watch out for the “gotcha”s with punctures, e.g. make sure that whatever caused the puncture in the first place is truly gone from your tyre (hint: a small rag is probably better than your unguarded finger for checking for stray shards!). And check that there isn’t more than one entry wound; if you rode over a real minefield of sharp stuff it could be that you’ve been stung multiple times. Also be careful about using tyre levers to put a tyre back on the wheel rim (could pinch it); sometimes it’s safer to just use your fingers.

After all this advice and the best precautions in the world, sometimes punctures still just happen, that’s life. It’s a small (and hopefully rare) price to pay for the benefits that cycling brings!

What’s your top tips for dealing with punctures?