The City Council is continuing to churn out new street reconstruction proposals around the city; this time it’s the turn of Woolston Village on Ferry Rd to get a makeover. As usual lately, that includes some improvements to the environment for cycling.

Woolston Village was one of the Council’s Suburban Masterplan revitalisation projects following the earthquakes. This traditional shopping centre has been looking a bit run-down, so this is the chance to make it feel more like a place that attracts people to come and spend some time here.

Key changes and improvements proposed for Woolston Village include:

Ferry Rd already has on-road painted cycle lanes (albeit a bit cramped in places) and is a popular cycling route from the eastern suburbs into the city. The Major Cycleway Route along this corridor will be the Rapanui-Shag Rock route (Stage 1 to Linwood already consulted on; Stages 2-3 along Linwood Ave to Ferrymead likely to be out in a few months), but Ferry Rd will continue to be a “local cycleway” route. Also not too far away will be the Heathcote River (Opawaho) Major Cycleway, just a block behind the shops. 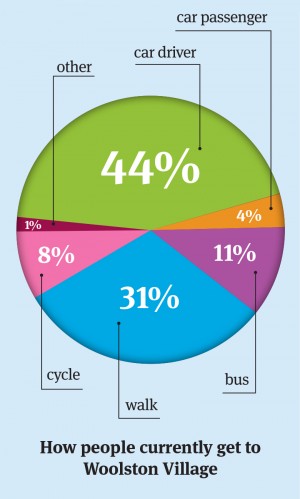 Predictably there have already been a few grumbles about the proposed reduction of Ferry Rd on-street car parks (from 77 to 21). Focusing on these numbers however is missing the bigger picture, and well done to the Council staff for tackling the issue head on this time. The consultation documentation notes the location of over 300 off-street and over 100 side-street carparks all within 100m of Ferry Rd (much of it relatively underused), so suddenly that loss doesn’t seem so bad (and, at a push, it looks like they could squeak in half a dozen more spaces back on Ferry Rd if they had to). The Council also surveyed over 200 Woolston shoppers earlier this year and found that less than half had come by car (see pie chart). Good on The Press too for recently taking to task the car parking moaners who it seems will never be satisfied.

Of course, one way to replace the lost car parking is with more bike parking; I think I saw a grand total of three bike stands currently available in Woolston. The project proposes “more bike parking”, although it only seems to show about seven bike stands in the plans; hardly a dramatic increase. If footpath space is at a premium, why not replace one car-park with a “bike corral”, where 4-5 kerb-protected bike stands will get you 8-10 customers? With a couple of popular taverns in the area, that could be the way to easily boost your patron numbers.

Like Sumner Village before it, it’s great to see the Council introducing a 30km/h speed limit to go with the revamped street layout. This will greatly improve the ambience and safety of having a lot of traffic going past; people will also feel more comfortable walking and cycling here. For the petrol-heads, having to slow down from a theoretical 50km/h to 30km/h through this village will add an extra (wait for it) 25 seconds to your journey (that’s if you were always able to achieve 50km/h before anyway)…

One thought however: why not extend the 30km/h zone to the adjacent local streets too? It’s seems a bit incongruous to be saying that you can now go back to doing 50km/h when on some streets you can barely get two cars past each other. The streets to the south will also provide a cycling link to the Heathcote Cycleway. Also, although they talk about “future gateway artwork”, it would be good to see something a bit more distinctive than a standard speed limit disc at each end – even just something that says “Woolston Village Slow Zone”.

Overall however, this looks like another good project for Christchurch, and a nice improvement for the cycling environment. Submissions close 5pm on Wed 8th June, so have your say.

What do you think of the Woolston Village proposal?