Last weekend I joined the City2Sumner Ride, organised by Frocks on Bikes, for a very pleasant jaunt out to the beach (thanks Connie!). The route from town out to Sumner took in the latest part of the Christchurch Coastal Pathway to be opened.

Following the official opening near Scott Park about a month ago, the Pathway now extends off-road all the way from Ferrymead to the eastern end of McCormacks Bay at Redcliffs.

The Ferrymead end has just been completed with the opening (at long last) of the new Ferrymead Bridge, including a new signalised intersection at Bridal Path Rd. This makes it easier to get to the Pathway from St Andrews Hill or Heathcote Valley.

The Pathway is nominally 4m wide, but it actually felt even wider. That might still make for a crowded route when it really gets popular in the future, but for now it works just fine even on a sunny spring day. And if it gets all too much for you, there’s still the adjacent on-road cycle lanes too.

At the Redcliffs end, the Pathway stops for now at the entrance to Beachville Rd. Currently work is underway to repair the seawall along the coastline here; as part of that, the next part of the Coastal Pathway will lead riders into central Redcliffs (although it is already pretty easy to ride along quiet Beachville Rd anyway).

At the Ferrymead end, ultimately the route will connect to the Rapanui-Shag Rock Major Cycle Route leading into town via Linwood. The first part of this route is currently under design; expect to see some public consultation out in the next month or so.

It was good to see lots of use of the Pathway already by plenty of people walking, biking, etc. Roadies out for a long training ride were just as likely to be there as parents with kids. No doubt that demand will grow even more as the connections continue to extend at each end.

The total funding needed for the Coastal Pathway is now estimated to be about $25million. While the City Council has committed about half of the funding needed, the Pathway Trust is still continuing to seek other funding sources from donations, community funds, sponsors, etc. The Pathway is also on the reserve list of projects for Govt’s Urban Cycleways Fund should any other projects around the country fall over. 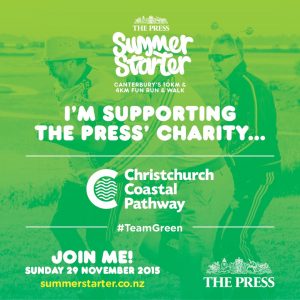 One way that you can help contribute to the Pathway is by taking part in the Summer Starter 10km/4km fun run or walk, from New Brighton or Bromley to Redcliffs on Sun 29th Nov. $3 of your entry fee goes towards your chosen charity, one of which is the Coastal Pathway.

There’s still a bit to go before the Coastal Pathway gets all the way out to Sumner. But already right now, residents in Redcliffs can hop on the Pathway for a safe and attractive connection through to Ferrymead and beyond. And if you’re coming from further afield in Christchurch, you could just park yourself near Ferrymead at Tidal View (or catch a bus) and then go for a ride…

Have you tried out the new Coastal Pathway section yet?