The other day we mentioned the proposed transport works coming around Hospital Corner. At the same time, work is also being developed at the other end of Hagley Ave, where it meets Moorhouse Ave. And again there are some interesting proposals in mind…

Essentially the key change is to take Hagley Ave (and Grove Rd) out of the Lincoln/Moorhouse intersection. As well as simplifying what is currently a complex and busy intersection, it also discourages south-western traffic from using the central city one-way streets, remembering that one of the aims of An Accessible City is to shift more traffic to the Four Aves.

The southern part of Hagley Ave changes to just being a southbound one-way street, providing access to Hagley Park and the netball centre. Other traffic to/from town is redirected via Selwyn St instead. Northbound cyclists are all redirected to the widened (4m) off-road path in the Park. Once in the Park though, it would be nice if there was a more direct path link west around the SW periphery as well, for those heading that way.

The simplification of the Lincoln/Moorhouse intersection will make it much easier to access Hagley Park from the south. Grove Rd provides a really useful quiet street link for cycling all the way south (through Collins, Simeon, Somerfield Park, Studholme, Thorrington) to Cashmere and Beckenham. But at the moment it can be a long wait to cross northbound, and nigh on impossible the other way.

I’m still pondering the proposed one-way section of Hagley Ave; I’m trying to think whether there would be advantage in having it one-way the other direction instead (e.g. heading for the south-west will be tricky it seems). No doubt either way, there will be some park users (or CBD commuters) who grumble about the extra inconvenience of having to go around the block – it will be interesting to see the submissions. But for cycling, the advantage of a more direct two-way route along Hagley Ave will remain.

Again, if you want to know more you can drop in to one of the information sessions being provided by consultation staff. And all submissions are due by Monday 8th September.

What do you think about the proposed works?

3 thoughts on “Have Your Say – Hagley/Moorhouse intersection changes” 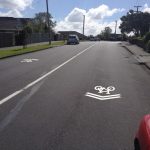