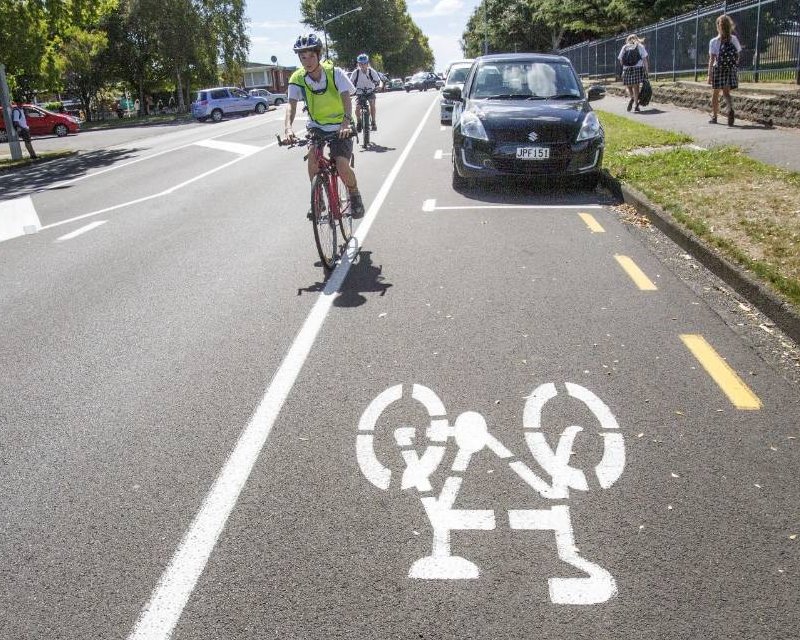 OK, time to consider some of the nitty-gritty in the road rules when you’re riding, particularly when in the vicinity of other road users. We’ve previously covered the various places where you can/can’t ride, but it’s probably on the road carriageway that’s the most challenging. What are you allowed to do and where can you position yourself?

(The usual disclaimer: this is my personal understanding and interpretation of the legislation; seek legal advice if you encounter some grief in relation to these rules)

Many riders start out trying to stay as far to the left as they can on the road, not surprisingly trying to avoid traffic. And many motorists reinforce this behaviour by insisting that the law requires cyclists to ride “as far left as possible” – except that it doesn’t say that. The specific Road User Rule actually says you must ride “as near as practicable to the left side of the roadway”; that’s quite a different thing.

What is “practicable” depends on the circumstances; the NZ Cycling Code (a mixture of road rules and just good advice) summarises it nicely:

Road rules state that road users should keep as ‘near as practicable’ to the left side of the roadway. This means that you should keep left, but not to the extent that it compromises your safety.

There are also situations where there is some glass, pothole or other debris in the lefthand side of the road, so it is quite valid to avoid these – try not to ‘suddenly’ swerve out to avoid them though.

Maintaining your safety when riding also means that sometimes it is quite appropriate for you to “take the lane”, i.e. position yourself in the middle of a traffic lane so that it is quite clear to motorists that they will have to either use another lane to overtake or wait. Again, the Cycling Code gives some good examples of when this behaviour might be appropriate:

These all seem perfectly valid (and legal) situations where keeping strictly left would not be sensible or safe. Sometimes a sharrow marking is used to help remind everyone that this is an appropriate place for taking the lane. Note that you should only take the lane for as long as is necessary; continue to do it and you might get accused of…

This got a lot of attention in 2015 when a cyclist was ticketed for this up Dyers Pass Rd. As we said at the time, the law is a bit grey on this one. Specifically it says (emphases added):

If a driver’s speed, when driving, is such as to impede the normal and reasonable flow of traffic, that driver must, as soon as is reasonably practicable, move the vehicle as far as practicable to the left side of the roadway when this is necessary to allow following traffic to pass.

Now there’s a lot of vagueness in this clause: What’s a “normal and reasonable flow of traffic”? If you have to get out of the way “as soon as is reasonably practicable”, how do you determine what is reasonable? A rough rule of thumb is to consider what the relative speed of nearby motor traffic is (or will soon be) – if it is noticeably more than your pace and you can safely do so, you might want to move out of the way. Use the above guidance on taking the lane for determining when it is or isn’t appropriate to shift over, recalling too that all road users in/on a vehicle (that includes bikes) also have an obligation not to be “careless or inconsiderate”.

We have raised this question previously, so I will reiterate what was stated then. The actual legislation is a bit indirect in telling you what you can’t do, but essentially you are allowed to bike two abreast on a road, except when passing another vehicle or when riding two abreast is impeding other traffic (see above).

Again, this means that there is some vagueness about when it is appropriate or not to ride two abreast. For example, if riding single file would encourage other motorists to squeeze past unsafely on a narrow road, then you could have a good case for remaining two abreast to ensure that they use the adjacent traffic lane to pass you. The trick is knowing when you should return to single file…

The rule around passing other vehicles is somewhat of a practical nuisance when you are riding alongside a mate and there are intermittent parked cars. While, strictly speaking, you should return to single file each time you pass one, in practice I think I’d only look at doing that on busier roads where there might be other traffic about. No traffic? No worries…

Passing on the Left

Just to complicate the situation further, now consider the situation where you are actually travelling faster than the adjacent traffic (e.g. in rush hour) – can you pass traffic on the left hand side? Again, the answer is “it depends…”

If you are riding in your own lane (e.g. a cycle lane) then the law is quite clear – you can happily pass anyone who is travelling in a lane to your right (assuming you can do so safely). However, if you are travelling in the same marked lane then you can’t overtake on the left unless the other vehicle is “…stationary or its driver must have given or be giving the prescribed signal of that driver’s intention to turn right.”

Many of you will immediately see the practical problem to this in busy stop-start traffic; one moment you can pass on the left and the next minute you technically can’t. Often this is in a location where a simple marked cycle lane would legally do away with all that nonsense. NZ Transport Agency have looked into the possibility of changing this rule, so watch this space.

Where these rules cause problems is if you have a crash with a turning vehicle, either the one immediately beside you turning left, or an oncoming vehicle turning right through a gap that queued traffic has “helpfully” provided. In both cases, a Police officer could contend that, because you were passing on the left, you were at fault. The latter situation is usually easily dealt with because, to provide a gap for right-turners, traffic usually has to become temporarily stationary. However, left-turners next to you (clearly signalling) should be avoided – hold back and let them go first (remember that all passing manoeuvres still have to be made safely and with due consideration of others). The interesting scenario is where a vehicle slightly in front of you slows down to turn and ends up behind you while you haven’t changed your speed at all – did you technically pass them? I think you could make a case that you didn’t, but if you saw them indicating for a sufficient time while in front of you then it is still prudent of you to apply caution.

As you can see, life is not black and white when it comes to many rules. All this could come up for discussion again, should the Government decide to go ahead with the previous mooted minimum overtaking gap rule and other potential cycling rule changes. Many of the situations described above require an “in the moment” decision to be made, depending on the context. First and foremost, make a decision based on your safety (sometimes being “right” doesn’t count for much if you come off worse for wear…); if that is not an issue then make a decision based on the presence of other traffic.

Do you have any other questions in relation to riding on the road?

5 thoughts on “Cycling and the Law: Positioning yourself on the Road”