We’ve heard a lot of good news stories over the past year or so as Christchurch has started “rolling out the green carpet” and introducing lots of new cycleways around the city. But I guess the real proof of the pudding will be when people are using the facilities and saying that they are happy to do so.

A key way to measure these impacts is via the City Council’s Annual Resident’s General Satisfaction Survey. This is a random phone survey of nearly 800 residents (which may not sound much, but statistically will give you answers within 4% of the total city population) covering a wide range of questions about Council services and facilities. We introduced you to this survey back in 2012; since then there have been four further surveys, so we’re starting to get a useful picture of post-quake trends.

There are two key questions in the survey regarding cycling. Firstly respondents are asked for their perception of Christchurch as a “cycle friendly city”. In this case, “cycle friendly” is defined as “cyclists being able to safely and conveniently travel around the city by cycle”. Respondents are asked to rate their agreement or disagreement with the statement on a five point scale: “strongly agree”, “agree”, “neither agree nor disagree”, “disagree”, and “strongly disagree”.

The graph below shows how the percentage in agreement or otherwise has changed since 2010 (NB: no survey in 2011 due to the quakes). You can see that in 2016, 53% of respondents agreed that Christchurch was a cycle friendly city (31% disagreed, 13% were neutral), compared with a target Level of Service by CCC of 26%. 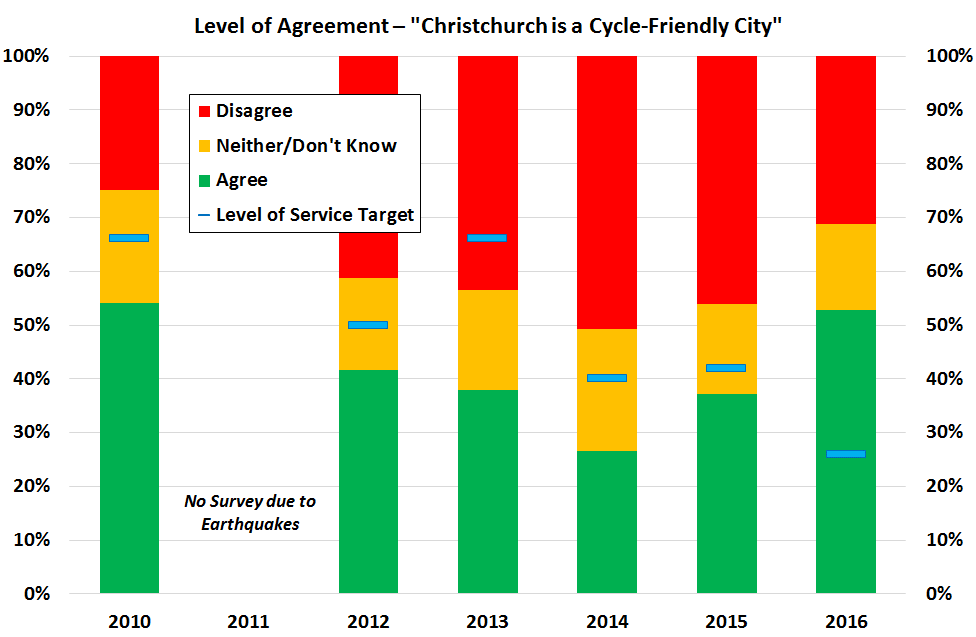 By comparison 84% of people agreed that Christchurch was a walking-friendly city; interestingly their target was 78%.

The historical data charts well the changes in perceptions of cycling in recent years. For example, 2014 was clearly a low-water mark with only 26% finding the city cycle-friendly (vs 51% disagreeing), but this was possibly in the wake of a number of high-profile cycle fatalities in the city in 2013 & 2014. And while the post-quake street environment clearly wasn’t making life fun for biking around the city, it would appear that the start of investment in cycleways around the city is beginning to pay dividends (and that’s before we really start to roll them out…). This year’s survey showed a significant jump in the number of residents who saw the city as cycle-friendly, from 37% last year to 53% in this year’s survey. That’s almost back to the 54% agreement recorded in early 2010 just prior to the quakes, more than twice the “disagrees” then (25%).

It’s curious to see how the Council’s target Level of Service figure for cycle-friendliness has jumped around the place over the years. It wasn’t that long ago that the target was 66%, briefly dipping post-quakes, then it was dragged down to 40%, and now it’s supposedly 26%. What on earth is that about? Hardly a very ambitious target, particularly given the pro-cycling feedback from “Share an Idea” back in 2011. Hopefully they will increase the target in the Long Term Plan to reflect more realistic latent demand expressed for cycling.

Interestingly these findings haven’t meant a complete abandonment of cycling by Christchurch residents in recent years. When asked the additional question “how often have you cycled on a public road in Christchurch in the last 12 months?“, there has been virtually no change in cycling usage over the past few years, as shown in the graph below. 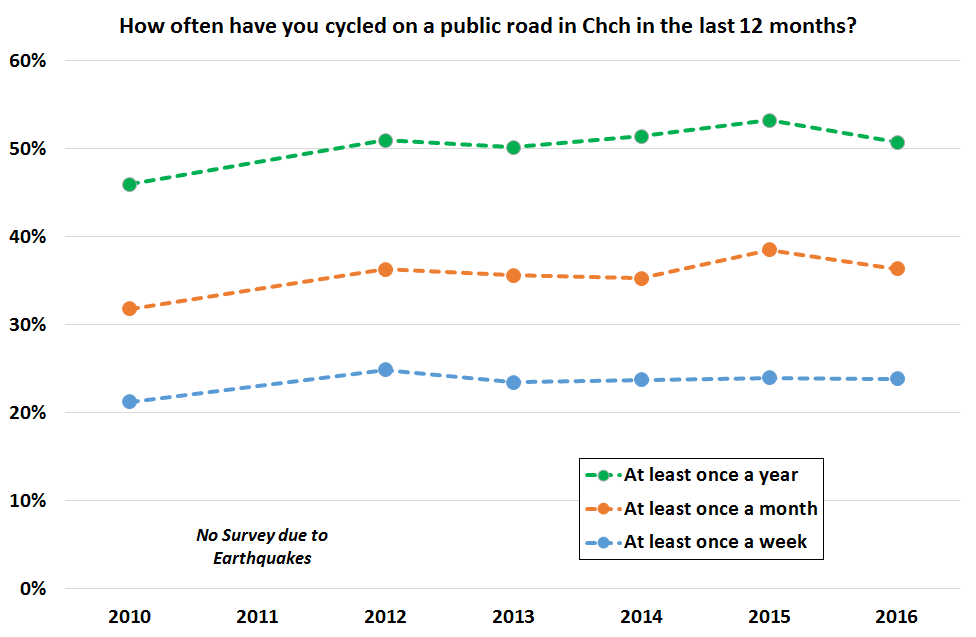 A rough rule of thumb from this data is that:

That’s right, any time that someone grumbles about catering to a “small minority” who cycle, you can point out that half of the city already have fairly recent experience of cycling in our city.

If we break the respondents down by age and gender, the younger folk are certainly happier with cycling in Chch (e.g. 59% cycle-friendly for 18-24 yrs in 2016, vs 48% for 25-49 yrs) and men are happier on their bikes than women (55% vs 51%). In many ways however, this just mirrors the levels of participation, i.e. the groups that cycle more have a better opinion of cycling (e.g. 62% of men have cycled in the past year, compared with 40% of women).

What is striking since 2015 however is the dramatic improvement in perception for groups that have previously had low figures (e.g. 50-64 yr olds jumped from 29% cycle-friendly to 54%; women went from 30% to 51%). It also highlights where the most gains can be made, e.g. if you can develop a cycling network that women and older people are equally happy to bike on (as seen in places like the Netherlands) that is a pretty good sign of success.

Clearly there is still the potential to improve cycle-friendliness further (otherwise there probably wouldn’t be Facebook pages like “101 Reasons why Christchurch City Council hates cyclists”…). But it’s great to see that already people are finding cycling in Christchurch getting better.

Do you think Christchurch is cycle-friendly?

5 thoughts on “Is Christchurch cycle-friendly enough?”