It’s been a week now since I got back from my trip to the US. My last destination was Boston, Massachusetts, on the NE coast (and I’m so glad I got out of there before this week’s fun…). Boston might not be as well known for cycling endeavours, but it was the only place on this trip where I actually got to ride around; quite a lot as it turned out (did I mention that the maximum temperature was -1 deg?).

Greater Boston has a population similar to NZ, governed by about 100 separate cities and other municipalities. Not surprisingly, this makes it tricky to coordinate providing for cycling, and so it seems to vary across the urban area. The City of Boston itself (pop. 640,000) has a cycle commuting rate of only 1.9% (rather similar to Auckland). However, the two adjacent cities of Somerville and Cambridge, home to the major universities of Harvard and MIT are amongst the 12 highest cycle commuting cities in the country, with about 7% of commuters cycling each.

So what is Boston like for cycling? Well, as a reasonably confident rider I found it generally OK to get myself around, especially where there were cycling facilities. But if you were trying to attract the “interested but concerned”, you’d have a long way to go for many to be happy with their bike trip options.

There’s a reasonable number of painted bike lanes and off-road paths, including some nice facilities along the many river-fronts and some great recreational trails like the Minuteman Bikeway.

At present though, there are only a handful of separated bike facilities; I think I just about managed to see all of them. There are also imminent plans to develop “neighborways” (rather like our planned neighbourhood greenways); for now there are just a few sharrows around the place.

I’m told that in the past Boston’s bike planning was looked after by someone who was a bit of a “vehicular cycling” fan. As a result, he was more likely to recommend sharrow markings on the road than an actual bike lane (let alone a separated one!).

Like the rest of the US though, there is starting to be a push for separated bike facilities, and so a few interesting ones are popping up around Boston.

Generally it looked like they made a reasonable effort of coming up with designs that minimised conflicts with other users, whilst minimising inconvenience for bike users.

So what take-away lessons have I drawn from my recent travels to the US (and my other “watching from afar”)?

As a fellow country still struggling to get from motor-centric to cycle-centric, it is useful to see what the US is doing to get more people biking. But the pace of change needs to be a lot quicker than what is happening to seriously alter American travel habits, and the same applies here.

What do you think about cycling in the US? Can we learn from them?

1 thought on “Last stop Boston – and Reflections on US Cycling” 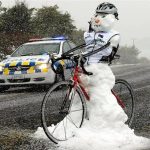