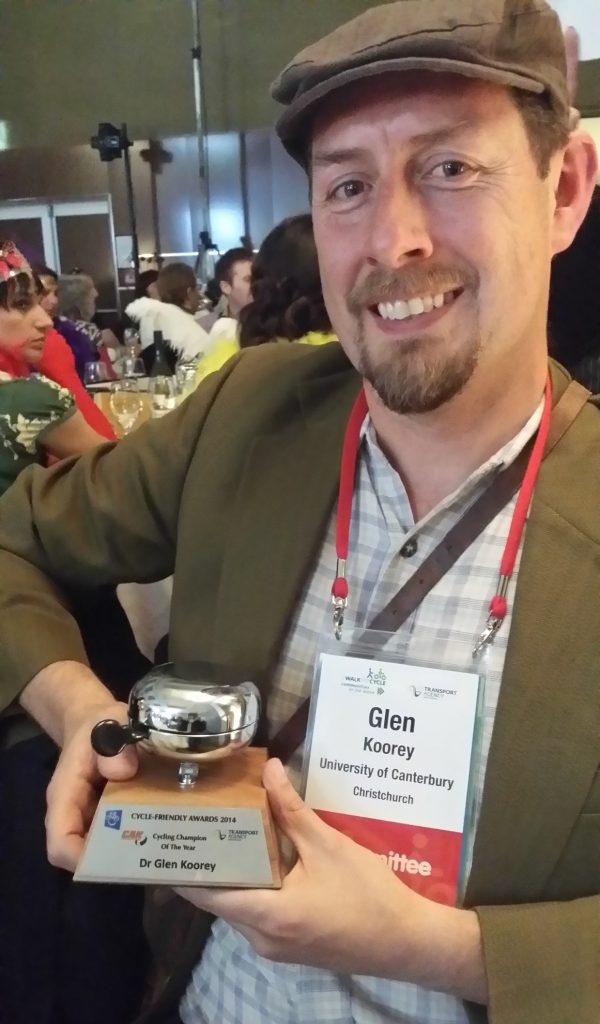 The national Cycle Friendly Awards were first held in 2003, and since 2007, the category “Cycling Champion of the Year” has been awarded. In 2014, Dr Glen Koorey of Christchurch was the recipient of the Cycling Champion category. Glen’s passion is helping achieve a more attractive & accessible cycling environment to entice and support people to cycle. He helps achieve this through role modelling, practically supporting cycling promotions, teaching engineering planning/design skills, and sharing & dissemination of credible academic research and specialist advice. The purpose of this blog entry is to illustrate just how worthy Glen’s contribution is.

Glen is a cycling champion active in local, national, & international spheres. Locally, Glen’s achievements include active participation with Spokes Canterbury, the Canterbury group of Cycling Advocates Network (CAN) where he particularly assists with technical best practice, submission advice, representations to Council and other agencies, and personal support for proposed cycling infrastructure & promotions. He also provides advice on the local Living Streets group, the walking advocacy group. Since 2012, Glen has been a moderator and blogger on this Cycling in Christchurch website. Recently, Glen provided local promotional support to the Cycling Colombo event. He was a key support person of Christchurch’s inaugural “Open Streets” event, assisting the Christchurch City Council (CCC) team practically and in an advisory role with planning, promoting, implementing (e.g. a mock-up of a Dutch Intersection, and separated bikeways), and on-day support.

By profession, Glen is a Senior Lecturer in Transportation Engineering at the University of Canterbury with a research and teaching role educating generations of students from all over New Zealand and the world, teaching over 200 students per year in sustainable and safe transport, including speed management and planning & design for cycling. Over the past 15 years, his wide-ranging research & consulting experience also includes sustainable transportation policies, planning & design for walking, crash data analysis, and the design and operation of rural highways. Through his own research and research of his students, Glen has developed specialist expertise in planning and design for cycling, and related topics. He has supervised PhD, Masters (MET) and BE (Hons) student research that covered a variety of topics related to cycling. Glen is a member of the Canterbury University Transport Working Group, which advises the university on issues relating transport provision on campus, including cycling infrastructure and bike parking.

Glen is a valued long term member of the Canterbury Regional Council Passenger Transport Advisory Group (PTAG) representing cycling interests. He is a member of the CCC Major Cycleway Routes programme management team formed in July 2013 to begin detailed analysis on how to deliver 13 key cycleway routes; the project has a budget of $68.3 million. He is an advisor to CCC for the design of cycle infrastructure including the recent Christchurch Cycle Design Guidelines, and a review of the Ilam Road Cycleway project. 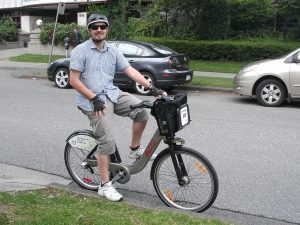 Nationally, Glen’s achievements include supporting the Cycling Advocates’ Network (CAN) in the past as a Committee member (2000–2011, including a year as Co-Chair), and he is currently an active CAN member, including filling the role of the CAN media contact, and attending regular meetings with the NZ Transport Agency (NZTA) and the Ministry of Transport (MoT). He was a member of the steering group overseeing the CAN/BikeNZ Safer Cycling project for NZTA (2011–2012).

As a general media contact, Glen often provides informed comment on cycling behaviour, road user conflict, and safety issues, where he skilfully and tactfully argues for best practice outcomes. Between 2012 and 2014, he has given over 50 interviews about cycling issues with TV, radio, newspapers and magazines since 2012; recent work of note included North & South magazine (May 2012), TVNZ Sunday (April 2013), and The Listener (December 2013). The following quote (31 August 2012) is typical of Glen’s style:
“I continue to be intrigued and disappointed by this country’s relative lack of concern about routinely killing over 300 people and injuring thousands of others each year on our roads. The social cost of this to the country has been determined at over $4 billion, at least double the estimated costs of congestion to New Zealand.”

Glen has been a committee member of the NZ Cycling Conference since 2005, which since 2012 has been called the 2WALKandCYCLE Conference. He was the convenor for the 2012 conference.

In June 2013, he made a key submission in to the Coroner’s national Inquest into Cycling Safety, based on his own investigation of over 80 fatal cycle crashes in NZ since 2006. An outcome of the inquest was a Cycling Safety Panel convened by NZTA during 2014, where Glen was appointed as one of the ten expert advisors.

Glen has presented nine papers, posters, and invited presentations on cycling and related topics to conferences around NZ since 2012. He is a member of the national Active Modes Infrastructure Group, convened by NZTA and the Road Controlling Authorities (RCA) Forum to consider changes to signs, markings and legislation for walking and cycling infrastructure.

Internationally Glen’s achievements include his membership of the Bicycle Transportation Research Committee of the US Transportation Research Board. He is the chair of their Communications/Membership sub-committee. Glen is a member of the “Scientists for Cycling” global network of cycling researchers. He has presented six papers, posters, and invited presentations on cycling and related topics to international conferences in Australia, North America, and Asia since 2012. He has authored a chapter on “Network planning and infrastructure design”, in the book Cycling and Sustainability (edited by J. Parkin, Emerald Publishing, 2012), and is currently preparing a chapter for a book on Australasian Cycling Policy.

Glen is at the top of his game in his busy, more-than-fulltime academic world and yet he willingly gives of his own time in a voluntary capacity for enabling people to cycle as a valuable and normal part of the transport mix. He is a modest and highly effective cycling champion role model. His broad range of activities is already providing widespread benefits across New Zealand and the world. Glen willingly gives his own time in a voluntary capacity helping make cycling safe, fun, and accessible. He skilfully balances this with his professional obligations for teaching, researching, and consulting on cycling planning & design.

Glen’s impact is particularly unique as a Cycling Champion for just how many New Zealand and International spheres he influences. I express my deep gratitude that Glen is devoting his energy, passion, and knowledge to furthering cycling for transport.