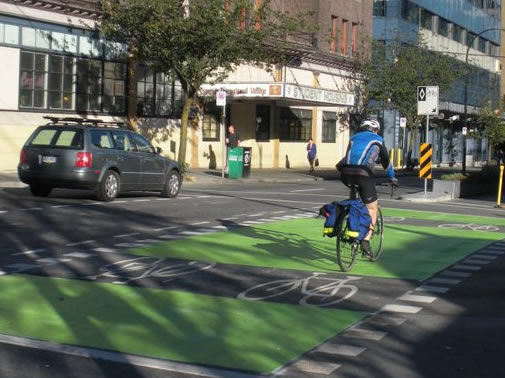 “Suburban Nation – The Rise of Sprawl and the Decline of the American Dream”
Andres Duany, Elizabeth Plater-Zyberk, and Jeff Speck

Suburban Nation is three architects’ vision for how our burgeoning population can be housed more efficiently, humanely and sustainably. Much of what they have to offer is of great value and provides proven alternatives to car dominated sprawl. Unfortunately their message does not feature cycling.

The authors have worked with subdivision developers in the U.S. for decades and are intimately familiar with the workings of land development, construction, the finance involved and the mindset of the engineers, planners, politicians and bureaucrats involved.

They seek not to upend the apple cart, but to remodel it to one which is more sustainable while acknowledging the market forces and conventional thinking which dominate the land development and transportation industries.

Some developers, even here in Christchurch, are listening. The higher density neighbourhoods offer developers the potential for greater profits while delivering a potentially superior product.

The vision is of traditional urban neighbourhoods where a five minute walk delivers most residents from home to shops to work to school and the train or bus stop. These communities are tied together by pedestrians using trains or buses or cars. Bicycles make an occasional appearance, but are clearly not foremost, or even particularly present, in the authors’ minds.

They do emphasize the tyranny of the automobile and the tragic waste involved in and created by roads and parking lots.  Auto centric development enslaves people to a life of congested commuting and blighted environments where we are forced to spend far too much paying for the cars and infrastructure which have become our masters.

Walk able neighbourhoods and public transport are seen as the solution. Bicycles on or along with public transport may be lurking outside the theatre, perhaps even visible from the wings, but have certainly not secured a significant part.

The author’s report that developers are a conservative bunch hesitant to embrace the neighbourhood model; in spite of its success having been proven in quite a number of instances and over long periods of time.

Developers’ are not alone in their conservatism. It is reported that most of the professionals involved lack flexibility. Many are unable to accept that Traditional Neighbourhood Developments have been successful or that the current model of sprawl has failed to deliver satisfactory sustainable humane communities.

The common person senses that something is not right, but may not be well versed in just what. This book, and the Congress for the New Urbanism movement it has spawned, seeks to assist us. www.cnu.org/

Active citizen involvement in deciding what and how is to be built is required from the very beginnings and without end. “…projects are being developed with the active participation of citizens in the design process. Their common sense is a necessary foil against the technical expertise of the specialists.”

This bit of common sense has certainly not taken hold in Christchurch with developers or government.

Cycling can contribute to and expand this neighbourhood vision for creating healthy communities. Cycling provides daily exercise, the freedom of mobility and choice of when and where to travel. It does so at far less cost to the individual and to the community, be it for infrastructure, maintenance or operation.

Perhaps this is why cycling is not so prominent. It simply does not offer the opportunity for big projects requiring big financing and offering ongoing outsized profits.

Cycling does not appeal to the market as it is not as good at producing sustained profits as are cars, roading, or even trains and buses. It lacks the scale and the capital costs to support ‘Empire building’.

Cycling is a radical alternative. Social change is hard, but the clamouring for cycling in Christchurch has clearly reached majority levels. The harder part is getting our leaders, business, government and professional to catch on.