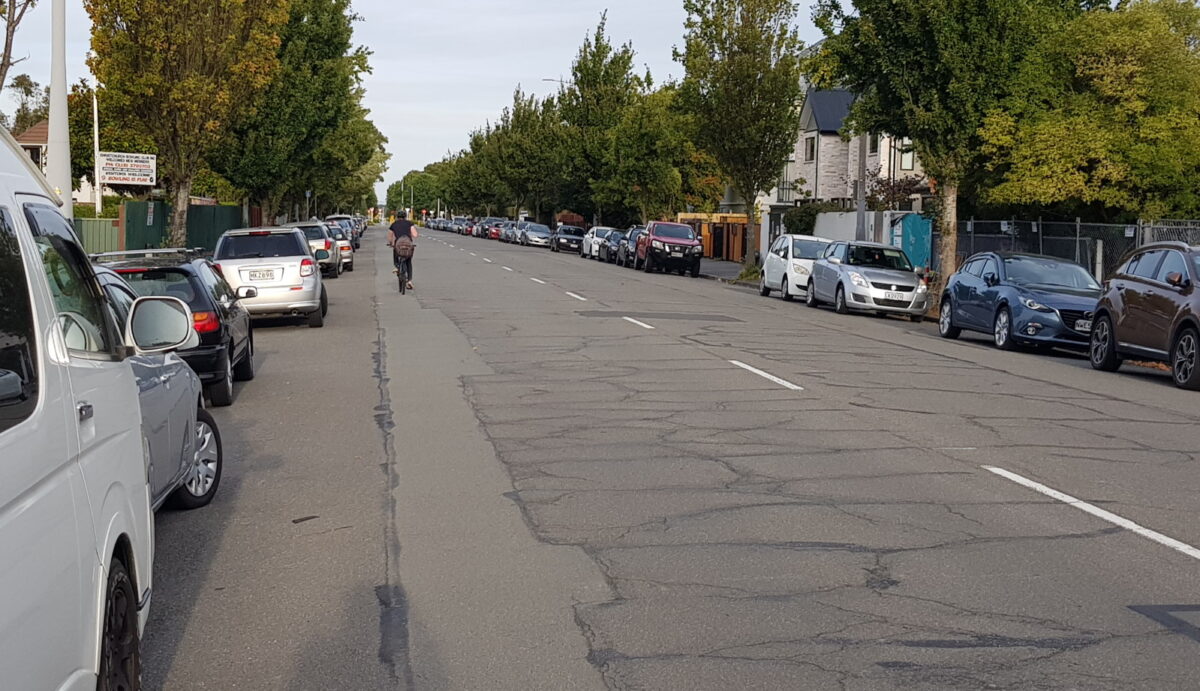 Post-quake, there was always a bit of a gap between what Ōtākaro (ex CERA) did for cycling within the central city and what the City Council did for cycling  outside the Four Avenues. This has led to the odd situation whereby the city’s major cycle routes tend to come to a halt when they get to the central city – not exactly an ideal situation. Over time, low-cost proposals have been presented for the cycleways entering via Colombo St and Ferry Rd. Now it’s the turn of two more to be consulted on: the Quarryman’s Trail connection via Antigua St and the Rapanui/Shag Rock route in along Worcester St.

First the Antigua St improvements. At the moment, entering the central city along this busy cycle corridor, you have just a painted cycle lane north of Moorhouse Ave (thankfully widened with a buffer space a few years back). The new proposal is to construct completely separated one-way cycleways (2.2m wide) on each side of the road; these will then connect to the existing cycle crossing at St Asaph St.

Generally this proposal looks quite good, with solid separation, measures to address crossing driveways, and raised platforms to manage speeds. Hopefully the approaches to Moorhouse Ave might now have some  advance cycle detectors for the signals?

Also in the Antigua corridor is a proposal to provide a bit more space  at the Antigua Boatshed bridge; at the moment, this can be quite a pinch-point for people walking, cycling, scooting, etc. The plan is to cut back some of the raised gardens to allow more space on the northern approach, as well as better marking the bollards at each end of the bridge.

These proposals should improve the available room for riding through. I wonder though whether we should also be considering marking a layout on the bridge, similar to the old one, where there is a central section for faster travellers and slower areas on each side by the railings?

The other project currently out for consultation is the continuation of the Rapanui / Shag Rock cycleway into town along Worcester St. The proposal is  relatively low-key, providing a 30km/h corridor with sharrow markings along it.

While this might provide some assistance to users of the route, it does feel a bit undercooked. This is a fairly wide corridor so, rather like the efforts along Ferry Rd in town, the potential to do something more protective (even at relatively low cost) seems quite high – elsewhere, some people have even suggested potential re-workings. Also it would be nice if the Latimer Square path connections could be a bit more direct…

Feedback on both of these project proposals are due on Tue 15th March. So go and have your say now!

What do you think of the proposed cycleway links?