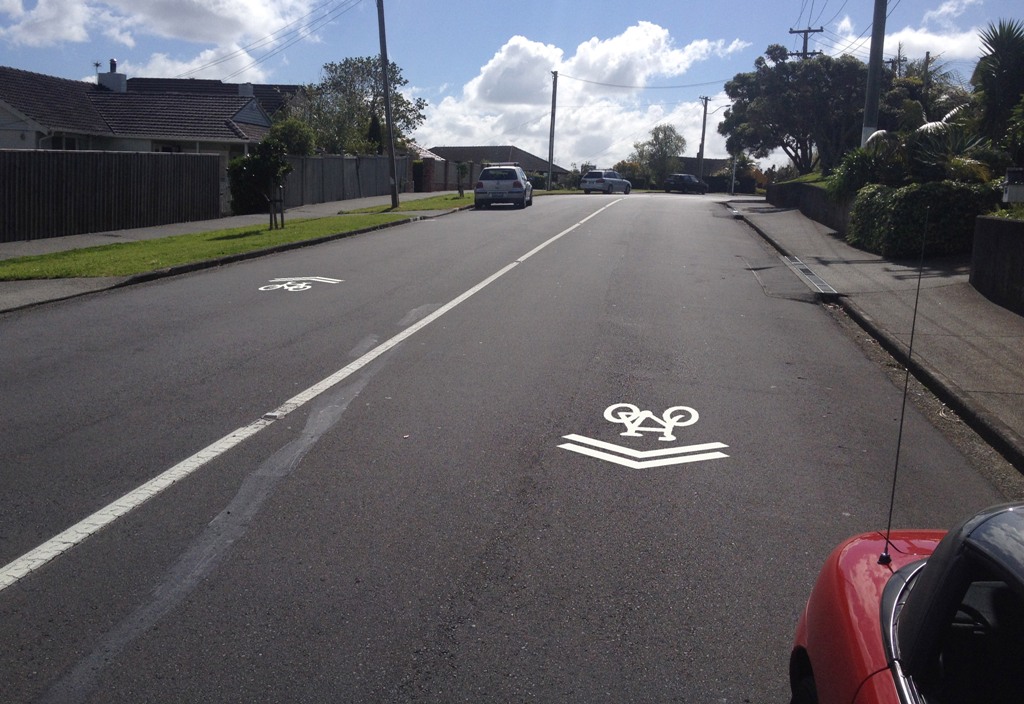 It’s been a rather busy week work-wise for me and with much of it spent down in Dunedin attending the latest 2WALKandCYCLE Conference (more on that in a future post…). So this week’s Flashback Friday has been a little late in coming (“Slacker Saturday” instead?). Back in Dec 2013, NZ was musing on possibly introducing sharrow markings as a way of signing suitable shared streets for cycling. A few trials and various implementations later, and they have become part of the standard toolkit of options (there’s even national guidance about their use). In Christchurch we already have a number of neighbourhood greenways now making use of them – and no doubt there will be more to come…

While cycle lanes and paths are all very nice, there are still many situations where it is not feasible or sensible to install them. For example, there may be limited road width to play with (and no politically easy way to give up some space from other things like parking). Or the cycling route may be on a very quiet street where it makes no sense to install special separate facilities. In these cases, how do you let road users know to expect to see people cycling?

You can’t just use a standard white cycle symbol because in NZ it legally indicates a cycle lane and all that entails (e.g. other traffic can’t drive along a cycle lane or park in it). Enter the “sharrow” (or “shared arrow”): Originally developed in North America, it’s a form of “advisory cycle marking”, whereby it doesn’t actually connote any legal obligations like a cycle lane. Instead it just indicates to everyone that you might expect to see people on bikes here and they might be sharing your traffic lane (rather than hugging the kerb).

There have been a few variations on a theme over the years. In Queensland for example, they used to use a yellow cycle symbol for a “bicycle awareness zone”, to indicate various situations where a bike would be somewhere in the vicinity of the traffic lanes (think: outside parked cars, approaching a narrow roundabout, on the inside of a blind curve, etc).

Or in San Francisco they experimented with a “bike in an arrow” symbol, again trying to position passing bikes in a safe location away from car doors (which, as we’ve mentioned before, can be a big menace when cycling).

More recently, the most popular advisory symbol to use is the sharrow, essentially a bike symbol with two chevron arrows on top of it. Like the others, as well as providing a visual reminder to all road users, it also indicates where a bike rider should position themselves laterally on the road.

It wasn’t long before some keen bods in NZ saw these and wanted to use them in their fair towns. However, being a stickler for due process, NZ Transport Agency and the Road Controlling Authorities Forum have formed a working group to undertake proper trials of these markings at various locations around the country before ratifying them officially. Auckland in particular have been rather keen, and a number of locations are about to get rolled out up there. The surveys will monitor things like motor vehicle speeds, lateral position of bikes and motor vehicles, and perceptions/understanding of the general public.

Christchurch City is on the working group and has been considering whether to try these out here as well. They could be used in a number of situations:

Interestingly, one of the side effects of introducing a new cycle marking is that we may have to tweak the existing cycle lane markings to make it clear what they legally are. This could be done for example by adding the word “LANE” to the cycle symbols.

Sharrows are not a solution for everywhere, and they’re certainly not just a cheaper substitute for proper cycle lanes/paths. The most appropriate locations for them are on streets with low traffic volumes and/or speeds, where bikes can safely “take the lane” as indicated. And they have to be carefully located to ensure that riders are clear of the “door zone” of any parked vehicles. But they could be another useful tool in our cycling toolkit.

What do you think of sharrows? Where can you think they could be used in Chch?

1 thought on “Flashback Friday(-ish): So what’s a Sharrow and do we want them here?” 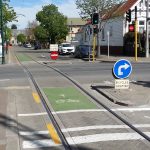 Photo(s) of the Day: Worcester Boulevard

Today's photo is actually a before-and-after of what could be: Worcester Boulevard is a great central city connection between Cathedral Square and Hagley Park via ...
Read More...
25 February 2016 / LennyBoy