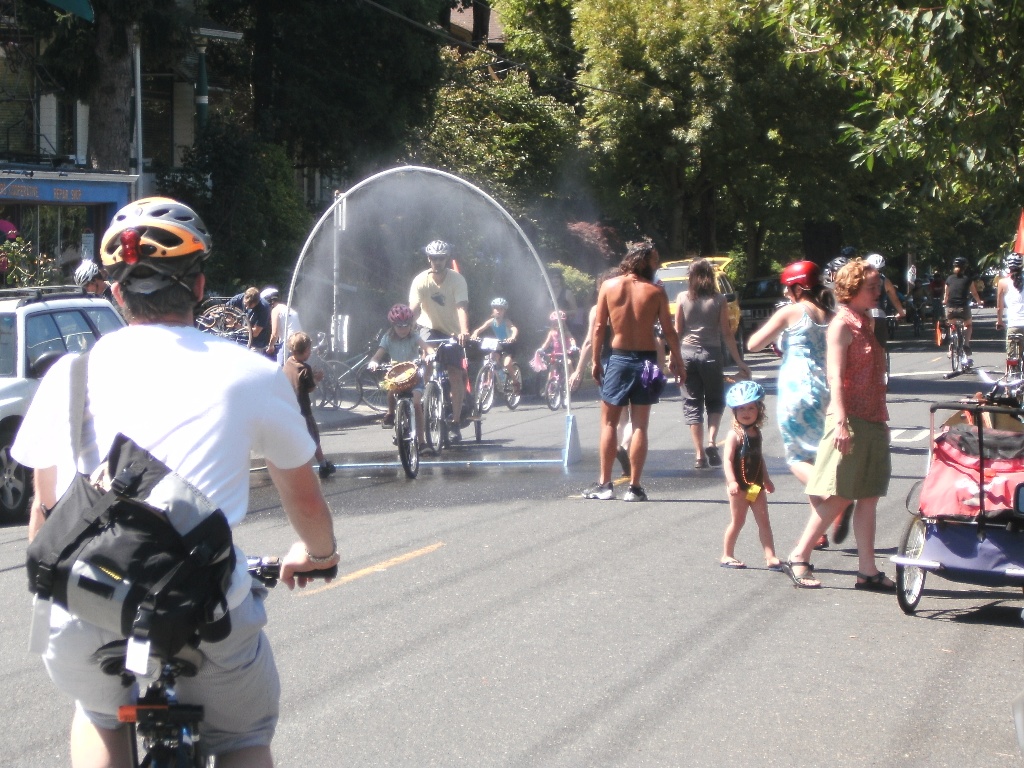 The past couple of months have given us an interesting experiment into what happens when you effectively shut down streets from traffic and turn them over to people walking and biking instead. Under “normal” circumstances, you have to deliberately implement a temporary street closure to make that happen (such as the Open Play Street in the central city in early March). Many countries regularly do such events to bring people out on their bikes and other active modes, and this post (originally from Apr 2013) introduces the concept to Christchurch – where it would be picked up not long after…

Encouraging cycling is more than just building infrastructure, and one way is to create events that encourage people to get on their bikes and enjoy the freedom and fun that is cycling. Around the world, many places have embraced this by holding regular “traffic-free streets” events where people can walk, bike, scoot, skate, or whatever, without the concern of looking out for cars.

“Ciclovía” is the common term for these events, having originated in the Spanish-speaking city of Bogotá, Colombia. Translated as “bike path”, these events originated when city organisers arranged for certain main streets to be blocked off to cars each Sunday and on holidays from 7am until 2pm for the exclusive use of runners, skaters, and cyclists. Today, Bogotá’s weekly ciclovía are used by approximately 2 million people (30% of its citizens) on over 120 km of car-free streets.

Since then, similar events have sprung all around the world, including Australia and North America. While some have used similar names (e.g. Los Angeles’ “CicLAvia”), many have been rebranded with terms more understandable to an English-speaking population, such as Open Streets, Streets Alive, Summer Parkways, and Sunday Streets.

In Portland, Oregon these events are called Sunday Parkways, and I was fortunate enough to attend one in August 2010. They started with one in 2008 and, such was its success, that they rolled out three in 2009, five in 2010, and it’s just kept on going every summer since then.

Sunday Parkways take place at various locations throughout Portland about once a month during summer, and involve closing off a loop of ~10km of streets for 5 hrs so that people can travel by active modes without the distraction of motor traffic (yes, if you’re a local you can still access your house, although they encourage you not to drive if you can avoid it).

Unlike many ciclovía, where main roads are closed down, Portland has opted to close off mostly local streets, including some routes along its “neighbourhood greenways” – this seems like quite a shrewd marketing strategy to get people to try them out. Where the route crosses main streets, Police are used to alternate priority between the parkway and main-street traffic.

At parks and schools along the route various stands, food-stalls, markets, and events are set up. These include live music, bike maintenance, sports games, eco-lifestyle information, demonstrations/trials of interesting bikes, and numerous give-aways. These ensure that it is more than just a ride – it is truly an event that you go to.

Many enterprising local residents also join in the fun with their own lemonade stands, garage sales, or sprinklers to ride through (much needed on a hot day!). These add to the interest – you never know what is around the corner. There was even a cycle planning book launch party along the route when I was there. All in all, tens of thousands of Portlanders come along for a very fun day – and apparently are always asking when the next one is.

Is it time to hold one here in Christchurch? Needless to say, it is potentially a big event requiring considerable resources and support from Council, Police and other agencies, as well as a small army of volunteers. Issues like temporary traffic management will need careful consideration in conjunction with the choice of route. But I suspect that, like they’ve found in other places, once the first one is successfully undertaken, the call would be “when is the next one?”

Would you like to see a ciclovía in Christchurch? Would you be interested in helping to organise one?

1 thought on “Flashback Friday: Time for a Ciclovía in Christchurch?”