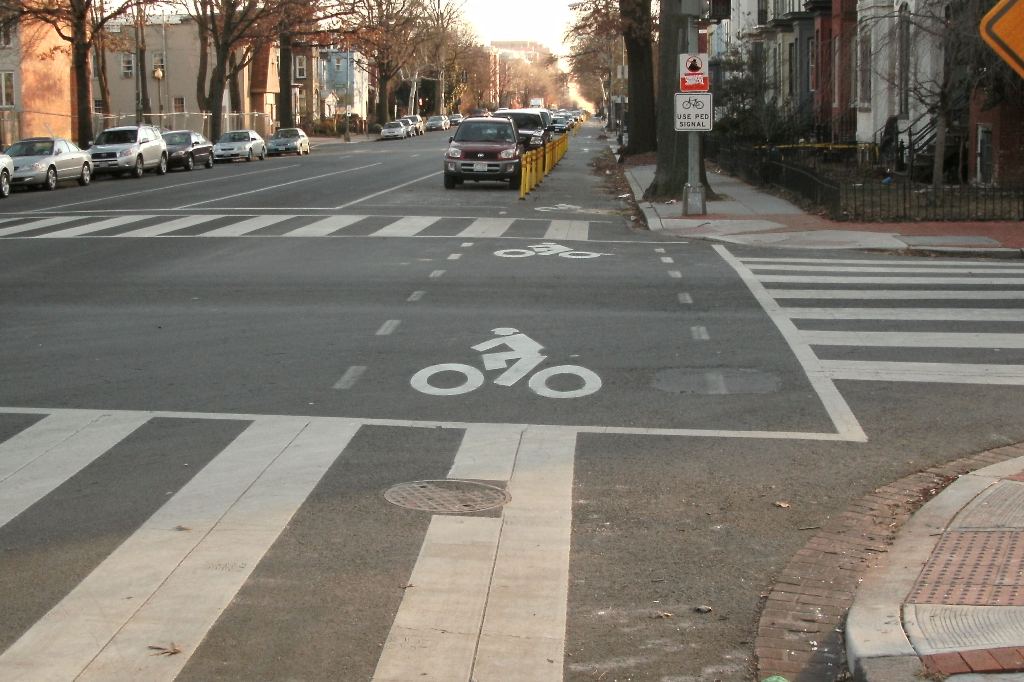 In my previous job at Canterbury University, I was lucky to be able to visit many interesting places overseas, and one of my regular haunts (due to its annual transportation conference) was Washington DC – unfortunately always in the depths of winter. DC has slowly evolved into a much more bike friendlier place than when I first visited back in 2007. Although I’d say that Christchurch has truly overtaken them in recent years, this post, originally published in Jan 2013 shows a couple of interesting things they were up to then…

Greetings from Washington DC! I’m attending the Transportation Research Board (TRB) Annual Meeting here this week. Actually, “meeting” is a bit of a misnomer; TRB is easily the largest transportation conference in the world, with over 11,000 delegates attending and taking part in ~800 sessions/meetings and seeing >4000 papers presented.

Not surprisingly I’m spending a bit of my time here focusing on cycling research, and I’ll let you know later if there are any interesting cycling-relevant findings presented. But for now I thought I’d show you some pics from my previous visit to TRB in 2010 when some of us got to take part in a biking tour of the city – featuring a balmy 3 degrees!

The space-age looking building above is the DC Bikestation, conveniently located next to the main Union Station and literally across the road from Capitol Hill (Congress). It provides secure covered bike parking to commuters in the city and other facilities such as lockers, repairs and changing facilities. There is also a bike rental shop on site.

A clever sliding rack system allows for a double row of bikes to be parked inside on top of each other. If nearby workers don’t have access to their own bike parking facilities, they can just use this for less than $100/year or $1/day..

Another interesting facility that had just been installed was a contraflow bike lane on 15th Street behind parked cars. The one-way street allowed for bikes on street in that direction, and then a series of bollards provided a protected facility going the other way too.

Note that it used to be a four-lane one-way street – they removed one lane of traffic to fit in the contraflow. This video show what it looks like.

Interestingly they haven’t provided any bike traffic signals at the intersections in the direction of the contraflow. So cyclists have to use the pedestrian signals as their cue as they can’t see anything else in their direction!

Have you visited (or biked in) Washington DC?