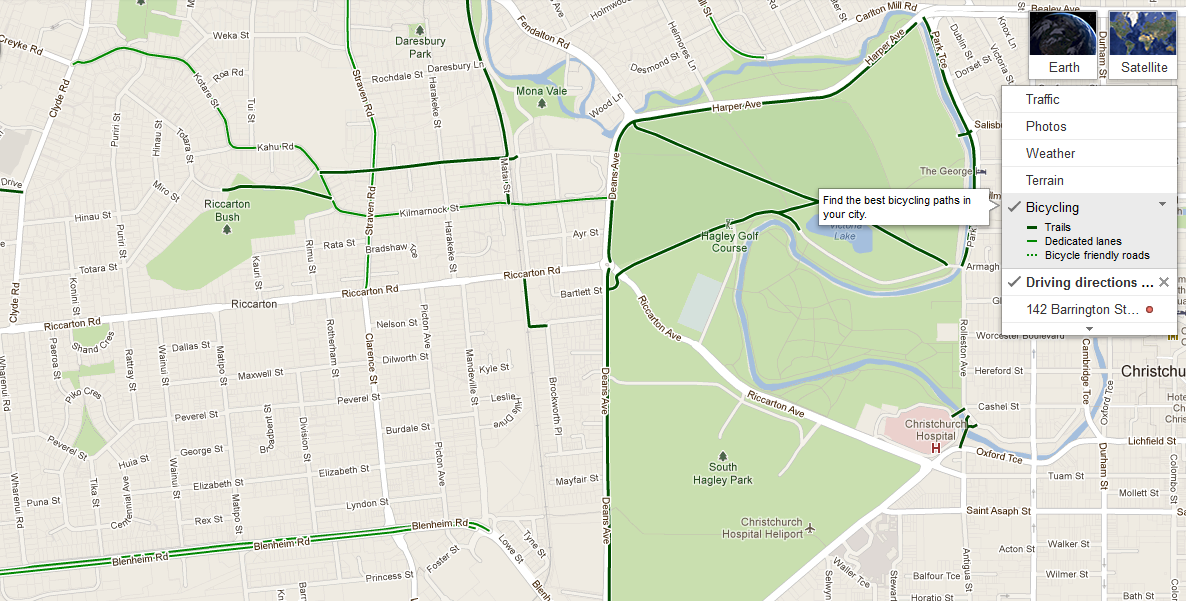 These days, using your smart device for wayfinding seems almost second-nature to many, even when on a bike. But seven years ago, it was pretty cool when the traditionally car-centric Google Maps first provided directions for biking around Christchurch (albeit with a few directional glitches). This post (originally from Sep 2012) provided an overview of what was possible; fortunately the routing seems a lot better these days:

{Speaking of maps, this probably a good time to remind people that the latest Chch Cycle Map is now available, both online/downloadable and hard copies at your local Council Library or Recreation/Service Centre…}

An interesting development was added to everybody’s favourite mapping service Google Maps in the past month. NZers can now experience getting directions for cycling, which will make use of any handy cycling shortcuts such as off-road paths. Viewers can also see the location of any bike lanes, off-road paths (“trails”) or cycle-friendly streets.

Fortunately there is a new way to help improve the maps that has also been released. Google Map Maker allows anyone to contribute to the pool of knowledge about what’s in their neighbourhood, including bike facilities {NB: Now incorporated directly into Google Maps – Ed}. The editing interface is a little hard to get used to (I was struggling to try to correct some bikeways that were a bit off), although it wasn’t too hard to add a new link or (more often than not) tell Google that a marked “road” was in fact a ped-bike trail. Pay attention to some of the attributes recorded (e.g. is the route “preferred” for cycling?), and also don’t get confused about divided roadways that are actually two separate one-way links.

What do you think about GoogleMaps bike route features?