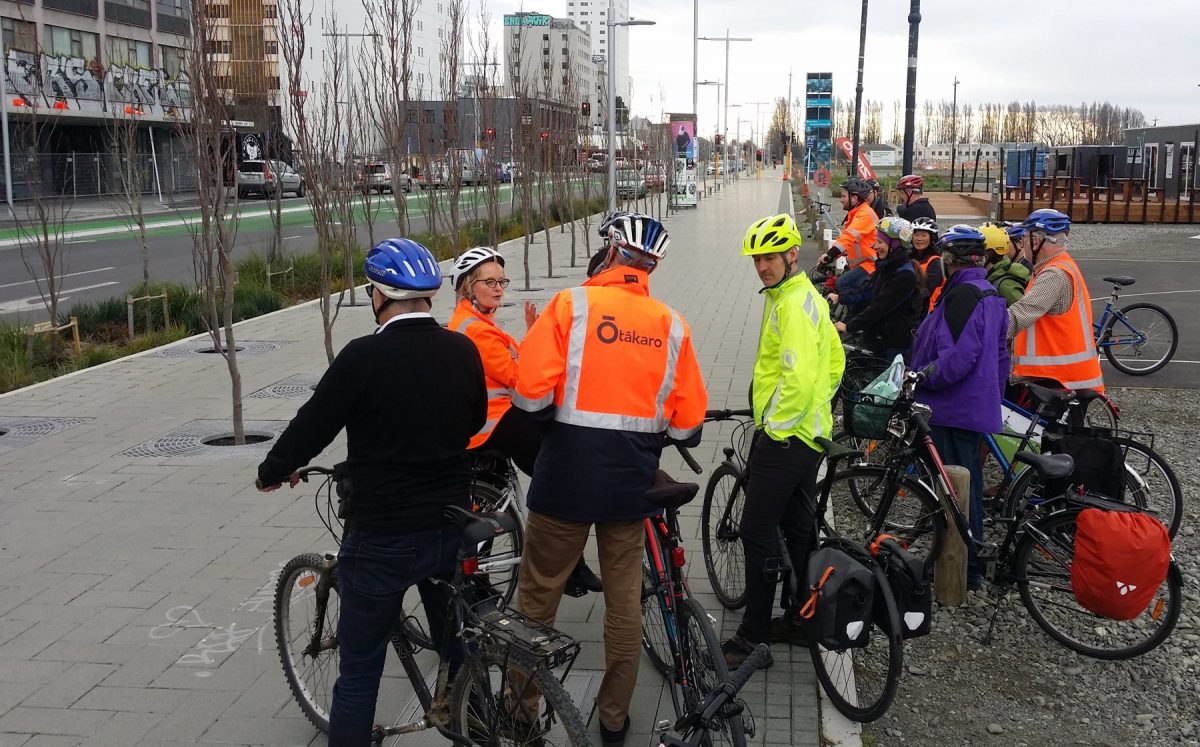 One of the things that can be frustrating is when street works being built (or indeed finished) don’t seem to properly consider the perspective of those riding along or across them. There are means and ways of letting people know about these problems, and advocacy groups like Spokes Canterbury do their best to raise concerns with the appropriate authorities. But it would be nice if some cycling-centric thinking was built into the planning in the first place…

With that in mind, recently a ride was held around the central city aiming to join the dots on some of these issues. Staff from Christchurch City Council, Chch Transport Operations Centre (CTOC), contractor Downer and Ōtākaro Limited linked up with reps from Spokes and Canterbury DHB to take in a cycling tour of some of the current and recent street works happening around town.

The route looped around various parts of the city, with frequent stops along the way to discuss thoughts. By riding through the many locations, everyone could appreciate any problems encountered; for example, a portaloo was “cleverly” placed along St Asaph St just where the new cycleway from the park merges with the footpath – not good for sightlines. Similarly, a temporary traffic sign was half-blocking a temporary cycle route – not nice if you hit this…

While the emphasis was on current construction and operational issues (e.g. around the Hospital Corner works), it was not surprising that some of the discussion also focused on the finished products.

Some of them were easy fixes, e.g. some green paint would help make people aware of the new cycle path off-ramp at the Durham St bridge. Others may take a bit more thinking, e.g. how to get from the on-road part of Manchester St in the south to the off-road path to the north.

Afterwards the discussion continued on over lunch, and hopefully a few people have some useful thoughts to ponder and implement. If I had one gripe, it was that this type of exercise probably should have been held much earlier before many of the completed projects were planned and built. But thanks to CCC for organising a useful outing.

What gripes do you have with current construction rebuilds around the city?