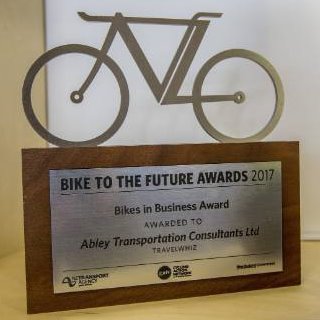 Next week sees the biennial 2WALKandCYCLE national conference come to Palmerston North; I’ll be there along with a couple hundred other delegates from around NZ and elsewhere. One of the highlights of the three days will be the presentation of the winners of this year’s Bike to the Future Awards, and a few Christchurch-based finalists will be watching with interest.

Organised by the NZ Transport Agency and Cycling Action Network, the Bike to the Future Awards are an opportunity to acknowledge New Zealand’s best cycling projects and cycling champions. Over 60 different candidates were nominated in five different categories and 20 finalists have now been named.

Last year, local transportation consultants Abley were a winner in the “Bikes in Business” category. This year, there are a few other Christchurch bods vying for the prestigious trophies:

{disclosure: my company ViaStrada has been involved in some of these nominations}

The award winners will be announced at the Conference dinner on Tuesday night – fingers crossed!