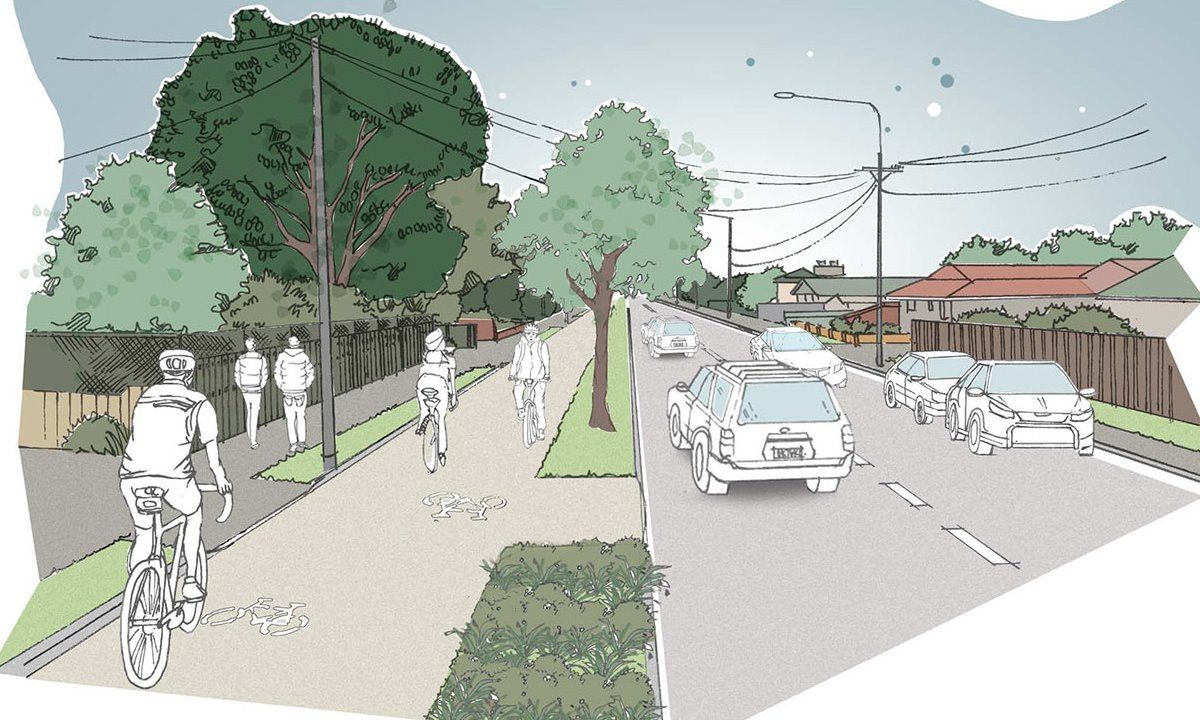 Simon Barnard has already introduced you to the latest Major Cycleway project out for consultation and aired his concerns. Here’s a bit more of a breakdown of what is proposed, to help you make a submission (which are due next Monday 27th).

The Nor’West Arc cycleway will eventually swing all the way from Papanui through Bryndwr, Ilam, Middleton and Spreydon towards Cashmere. This consultation covers the section from Canterbury University south, providing a handy link between the southwest suburbs and the northwest ones.

As with the other Major Cycleways, a myriad of different route options were considered in determining the optimal way between suburbs. The railway line, especially the Middleton marshalling yards, limits the number of ways to cross this barrier. Further south, the upper Heathcote River constrains the route choices somewhat. Mostly the chosen route makes sense and connects to key destinations such as schools.

The cycleway starts in the north with the existing cycleway along Ilam Rd. The existing one-way separated cycleways continue south of Rountree St, 2.0m wide on each side (Note: it takes a while to work out how to zoom the online consultation plans to something larger!).

At Riccarton Rd, the cycleway switches over to a 3.5m wide two-way cycleway on the western side of Middleton Rd. How that’s done however is not yet shown, as that is tied up with planned bus priority work along Riccarton Rd – I don’t imagine that the design will be that easy to implement.

At Suva St, the cycleway will turn west continuing as a two-way cycleway. Here is probably the first notable annoyance; a switch to a shared pathway just to go around the corner. Why? It really doesn’t appear difficult to simply continue the cycleway as a separated facility so that everyone (pedestrians and cyclists) is quite clear where they should be. There also doesn’t appear to be any logical connection here between the cycleway route and the adjacent Middleton Park; the existing refuge crossing islands are even being removed.

The 3.5m two-way cycleway continues along Suva St, with connections to Middleton Grange. At Hansons Lane, there will be a first for Christchurch – a joint pedestrian/cycling “Barnes Dance” allowing people to cross the four-leg intersection in any direction at the same time, rather like some of the ones found in the Netherlands. Again I have a bit of a question mark over whether cyclists and pedestrians had to all be mixed up together at the intersection, although I suspect it would have been hard to provide separate crossing phases given the nearby schools (would you wait with your bike if your walking friend was already crossing?).

The cycleway continues south along Hansons Lane, but approaching Blenheim Rd it reverts to a shared path again to cross at the signals. I wonder whether it would have been simpler to keep the cycleway on the eastern side of Hansons Lane to simplify the intersection here. A 3.5m shared path then continues along the south side of Blenheim Rd and swings around into Annex Rd, not too dissimilar to the existing cycle route already here.

The Annex Rd cycleway was already previously consulted on and hasn’t significantly changed, with a two-way cycleway on the south-western side. But it’s a bit of a mix; sometimes shared, sometimes separate, sometimes 3m wide, sometimes 4m. It also has the rather annoying habit of requiring users to stop and give way at every minor side road along the way; I don’t imagine that the cyclists who previously used the on-road cycle lanes (now gone) will be impressed with that drop in service level…

At the Birmingham Dr signals, the path crosses over to a new connection along Annex Rd to the Southern Motorway underpass (also where the Little River Link joins up).

On the south side of the motorway, the cycleway continues as a shared path alongside Annex Rd. Given the fairly quiet nature of the street here, I wonder whether it might have been better to just make it a neighbourhood greenway.

At Lincoln Rd, the pathway veers briefly northeast to head for Domain Tce (it’s not clear how you might head south towards Hoon Hay instead). It’s a pity that they couldn’t negotiate a more direct route across Hillmorton Hospital land; there’s a fairly useful shortcut across the open space north of Annex Rd.

Just before Domain Tce, a new signalised crossing gets cyclists across Lincoln Rd. Given how busy it can be to get across here, this will be very useful. Unfortunately once again we get a section of shared path after that for no apparent reason…

Along Domain Tce, initially a 3.5m wide two-way cycleway is provided between the roadway and the footpath. Approaching Spreydon Domain, this turns into a 4m-wide shared path.

At the bottom of Domain Tce, the pathway swings around to Glynne Cres and then across the Heathcote River through the Glynne Reserve.

Once onto Smartlea St and McBeath Ave, the cycleway changes to a neighbourhood greenway. It would probably make sense to reconstruct the intersection of the two so that the cycle route was more obvious going around the corner.

It doesn’t seem like there is a lower speed limit being associated with this greenway route; the street restrictions also look fairly tame in terms of calming traffic.

The McBeath Ave greenway finally connects through to Sparks Rd via an accessway to Pablo Place. Another shared pathway (or is it separated? Hard to tell) takes cyclists through here.

The Nor’West Arc route runs into the Quarrymans Trail here and a signalised crossing gets riders to the other side of Sparks Rd. Once it reaches the Heathcote River again, the route follows the river into Centennial Park with a 4m-wide shared path.

At the other side of the park, the pathway crosses Rose St and enters Palmside St. Again, a neighbourhood greenway treatment is used here, very similar in style to McBeath.

Once more, there seems to be limited street calming (although at least there are some sharp corners to slow people down) and no lower speed limit to go with the greenway.

Finally the cycleway reaches Cashmere Rd, where in the future it will also join up with the Opawaho Cycleway along the Heathcote (and hopefully also a handy link towards the Chch Adventure Park).

Overall, while the proposed route provides over 7km of useful cycleway, there are some odd design choices along the way that seem unnecessary or just a bit annoying. The mixing and matching between shared path and separated cycleway is not always logical, for example. It’s also not always clear how you might access easily destinations away from the cycleway route.

Oddly the main consultation page doesn’t actually say when submissions close, but I can tell you that it’s 5pm next Mon March 27th. So have your say!

What do you think of the Nor’West Arc cycleway?

1 thought on “Nor’West Arc Cycleway now due for consultation”