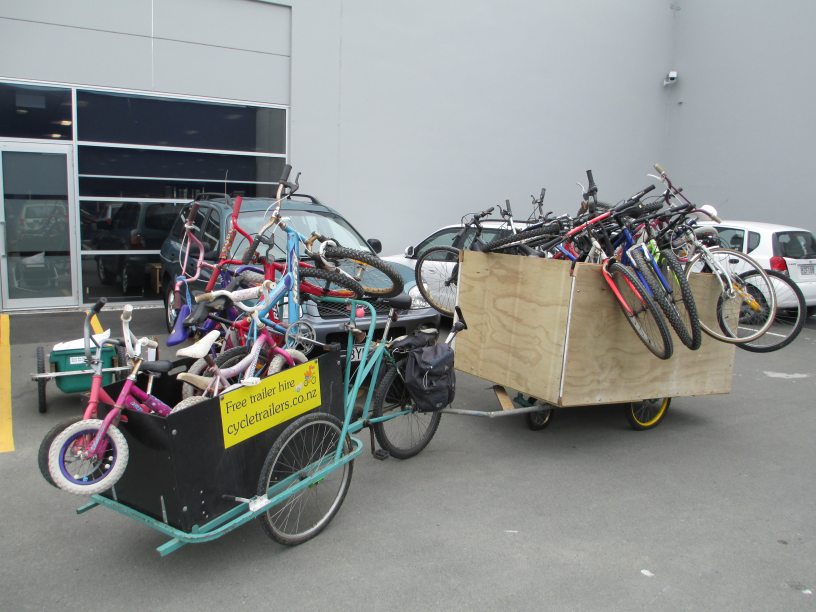 The answer is 19, but with a few adjustments required. This was found out in a highly scientific study on 10th November whilst transferring restored bicycles to the ICECycles free bike maintenance workshop held at Richmond School in Christchurch. Steven Muir makes cycle trailers and his previous record was five bikes taken on his three wheel trailer, which was just not enough. A car and car trailer could have been called in for assistance, but Steven is always looking for the opportunity to use the car for one less journey, and so he built a supersized bin to fit over the three wheel trailer frame and extend its carrying capacity.

The result was 13 bikes in the trailer and 6 childrens bikes in his ‘tadpole’ three wheeler. The average weight for an adults bike would be around 15kg, so that’s around 200 kg in the trailer and around 50kg (6 x 8 kg) of childrens bikes in the front.  The load was definitely sluggish to start and top speed was not high, but it was not too difficult to pedal along the 1.5 kilometre route. The front wheels of the bikes stuck out on both sides of the bin,  requiring the use of a full car lane, but most cars were so stunned by the sight they treated it with good humour, the only comment received being “this ain’t China you know”! The journey to the bike workshop was successful and many of the bikes were donated to worthy homes, however a similar number of decrepit bikes were received in return, which had to be taken back to the storage facility to be restored at a later date, which was when disaster struck. The left back wheel on the trailer had developed a distinct buckle on the journey to the school and, on exiting the driveway, it collapsed completely when it went down the curb, causing the trailer to tip over 45 degrees. Fortunately it happened on a quiet back road and not the middle of a major intersection, and one of the bikes on board had a suitable 20” donor wheel. There were plenty of bike tools on hand to effect the transfer, and so after a quick unload of all the bikes, Steven was soon on his way again, resolving to purchase some much stronger 48 spoke, 14mm axle BMX wheels rather than using the el-cheapo recycled kids bike wheels which were clearly not up to the task.