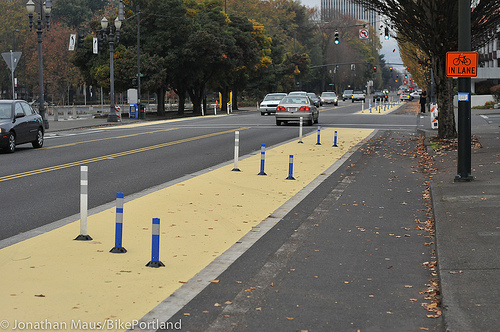 I know I rabbit on about places like Portland, Oregon, but it seems to me that they are in a similar place to us. A reasonable amount of cycling at present (~6% commuters) largely based on developing a network of cycle lanes. But now that they aspire to be a “world class cycling city”, they are starting to get very serious about trying out a range of treatments to reinvent their streets.

One recent project is NE Multnomah St, which was featured recently on Bike Portland. This busy street is in the heart of a main commercial district just to the east of the CBD and features a convention centre and large shopping mall nearby. When I was there a couple of years ago, this street looked like this:

Two lanes of traffic each way and a typical bike lane squeezed in next to it; hardly the environment to attract the “interested but concerned”. So the City of Portland have now added some additional separation and treatments at side-crossings:

It’s still a work in progress (and the treatments will be temporary for a year or two to evaluate things before making anything permanent), but it perhaps provides some indicators of what you could do relatively easily in Christchurch (and indeed seem to be planning for Ilam Rd).

In case you think this is a bridge too far for Christchurch, I can tell you that similar thinking is currently being considered by the City Council. Without being able to reveal too much yet, I have seen some fairly innovative designs being proposed for draft cycle design guidelines for the city – watch this space!

What do you think – is this kind of treatment a good option for Christchurch?

3 thoughts on “Separated Bikeways in Portland”