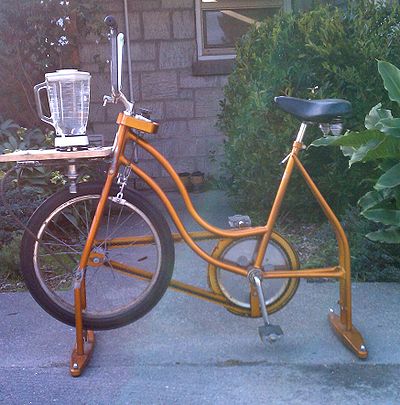 I’ve never liked using the stationary bicycles at the gym – they seem like such an incredible waste of energy when there is so much you could be doing with it.  Some people generate power using their pedals – those of us who use a dynamo, for example, generate power to drive lights even while pushing the bike along the road.  However generating electricity is a pretty inefficient way of doing things with engineers calculating that most generator systems losing 70% of the power that goes into the pedals.   This post  outines a range of ways in which  pedal power could be used more directly – for example, by using the pedals to mechanically drive the blades in this blender!

There is even a bicycle plough here which is powered by a cable that is drawn in as a staionary bicycle is pedalled.  the problem is of course, that if you need separate pedals for every gadget in the kitchen, you need a big kitchen!  so where the thought is needed is in how to link a wide range of gadgets up to a single set of pedals!

A great opportunity of all you inventors out there!

1 thought on “Many uses for a bike”