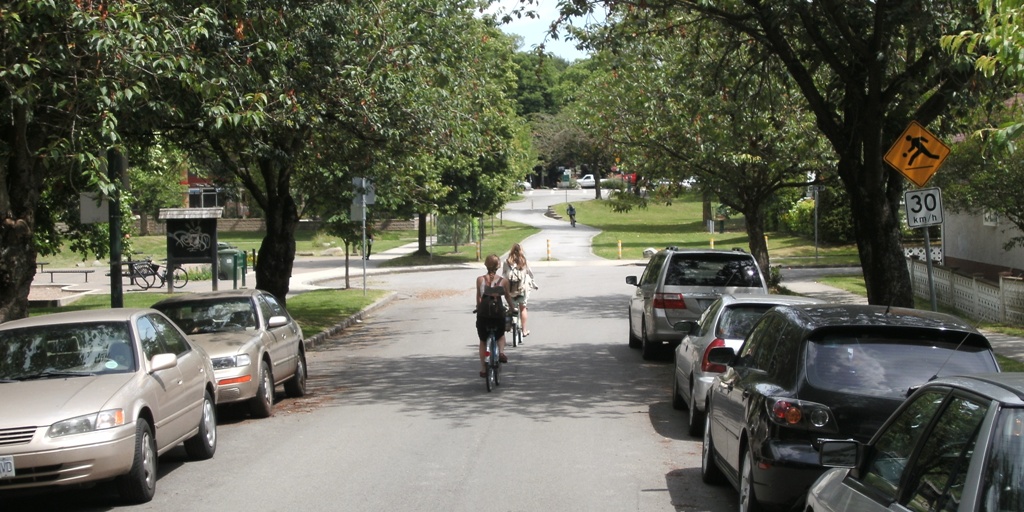 Some of the best cycle routes I encountered in Vancouver had virtually no cycle facilities on them… The City of Vancouver (pop.600,000 within the 2.2million Greater Metro area) has about 450km of bike routes. While some of that is conventional bike lanes, pathways, and the new separated bikeways, the backbone of the network is about 250km of “local street bikeways”. These are mostly on-street routes that focus on reducing motor traffic volumes/speeds and providing assistance across busy roads, to make for a more pleasant cycling experience (and there were lots of people out there cycling).

In other cities, these have been known as “bike boulevards”, “quiet streets”, and “neighbourhood greenways”. I like the last term particularly, as it highlights a number of key features:

Neighbourhood greenways use a number of different tools to help create friendly and intuitive routes:

Because they are relatively low-key treatments, neighbourhood greenways generally cost a lot less than conventional cycleways. At the same time, they also tend to benefit pedestrians and motorists as well because of the speed-related safety benefits.

Neighbourhood greenways work particularly well in grid networks, where there are alternative parallel routes for motorists; this is probably why they have succeeded quite well in North America. Some good examples can also be seen in Seattle and Portland. Christchurch’s grid layout in much of the city therefore makes it a good option here too; it’s not hard to think of suitable routes.