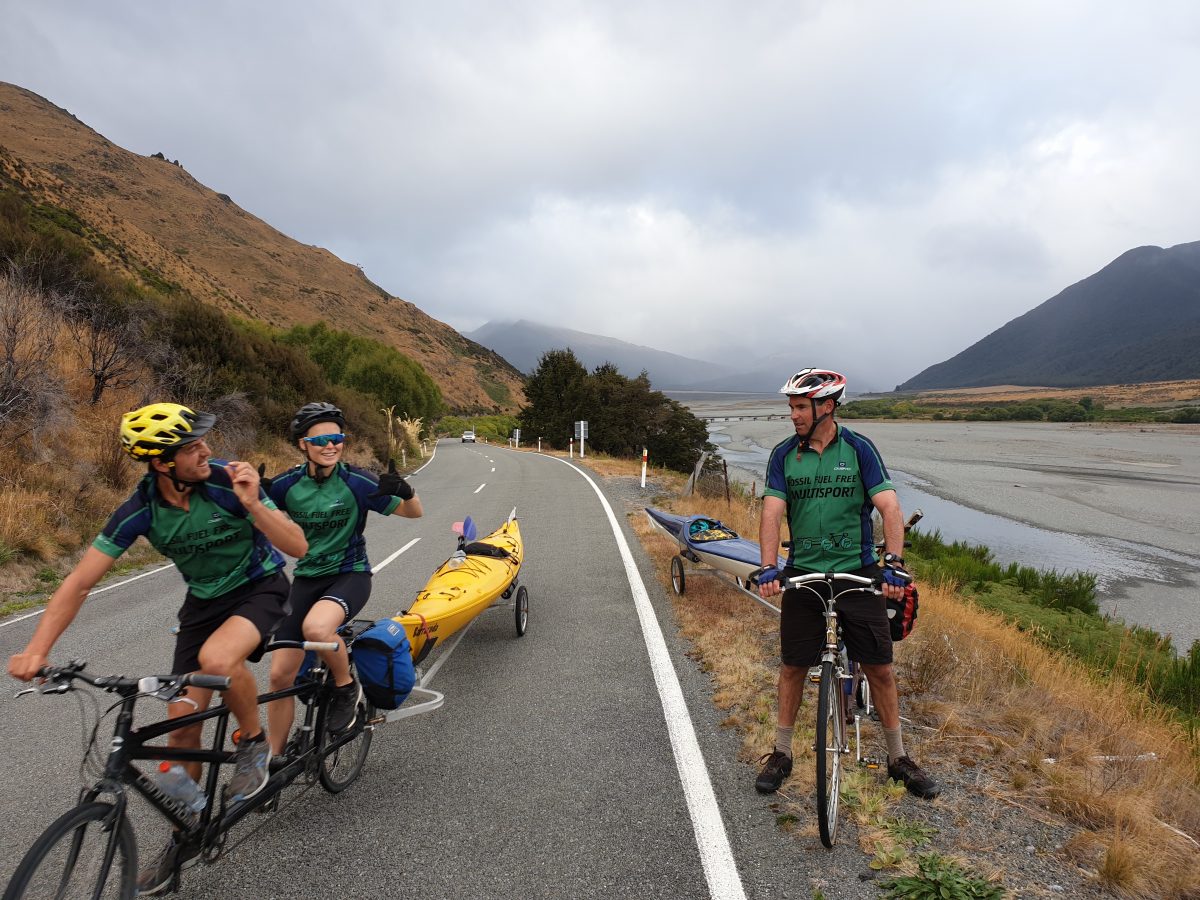 The idea of the Fossil Fuel Free Coast to Coast to Coast (F3C3) is to have a fun holiday, and to encourage the use of active (fossil fuel free) transport for as many journeys as possible, particularly those journeys that involve carrying loads and are made regularly, like commuting, shopping or training for multisport events. This is the third time we have made this journey, taking seven days to complete it, with six people participating on three tandems with three kayaks in tow. A video of the journey is available on youtube. Stories of other journeys are on cycletrailers.co.nz

Day one started at 12:30 getting the gear together and meeting at Church Corner, leaving Christchurch around 2pm to bike to Springfield, arriving around 6pm for a delicious BBQ dinner and camping at a friend’s house. The Easterly wind and fine weather made the journey relatively easy. 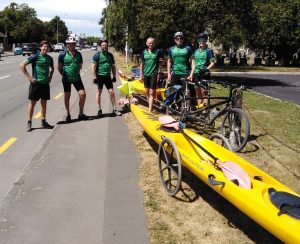 Day two had the challenging grunt up Porters Pass, and it started with some unexpected rain and cold weather which meant we didn’t overheat going up the hill. The ascent seemed to go relatively quickly and we all walked the steep bit right at the top. 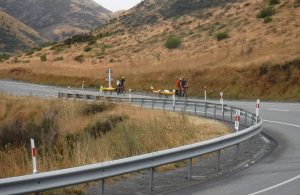 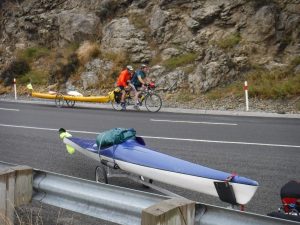 At the top of Porters Pass, Antoinne (a French Canadian) met a fellow Quebecan who was keen to have a go, so he swapped his seat on the tandem until we got to Castle hill for a lunch break. We stopped off at the head of Lake Pearson and let two of the people who were not kayaking the Waimak, have a go on the kayaks down the length of the lake which was an entertaining break and enjoyable in the increasingly fine weather. The rest of the ride to Bealy Spur had some fantastic scenery & the bach and dinner were very welcome, followed by some eopic games of 500. 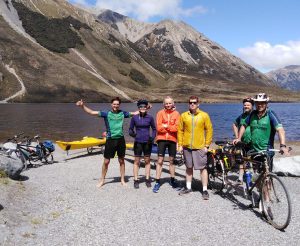 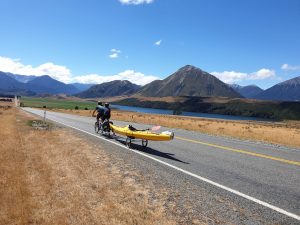 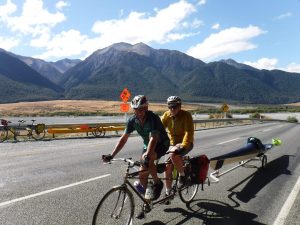 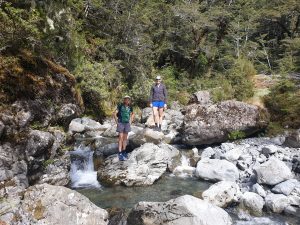 On day three we dropped three walkers off at Greyneys Shelter for the walk over the Mingha –Deception. Two of them had never walked anything that rugged before, so they were a bit nervous on the rock hopping & river crossing, but persevered well & made it to the next bach at Otira around 7:40pm very tired. Steve & two others rode the tandems solo down Otira and enjoyed a siesta to rest the legs a bit. Some adjustments were made to the chain tension on one of the tandems which had been throwing its front chain fairly regularly. 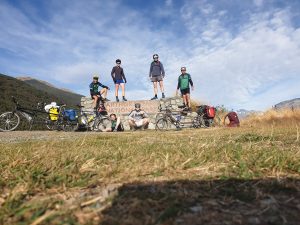 Day four involved a 133km bike to Kumara Beach and back with some great misty West Coast scenery on the way. It was Priscilla’s Birthday so we stopped at the Kumara hotel for a fancy lunch, then had a stroll to the historic baths & Londonderry Rock to let lunch digest a bit. Legs were getting pretty tired on the way back, but a rest at Jacksons revived us, only to have another forced stop to repair a broken chain on one tandem and a twisted couple of chain links on another tandem. 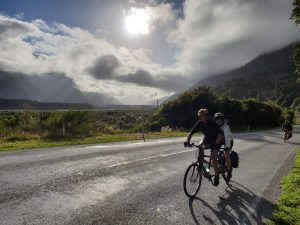 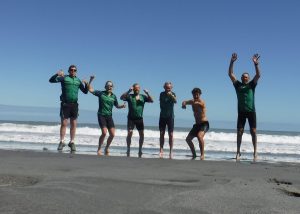 Day five Steve and two others walked up the Deception Valley, starting off in some rain which eased relatively quickly. Sam showed us where the hotpools are and after an hour or so of digging and damming the hot water supply we got a large enough puddle to lie in for an enjoyable bath before continuing over Goat Pass & back to Bealy Spur. The others had the challenge of hauling the tandems back up Otira which all went well. 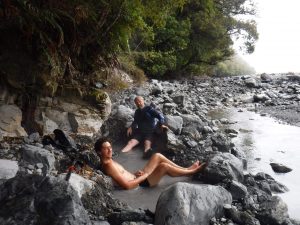 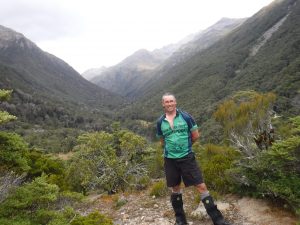 Day six we all biked to the Mt White Bridge, getting a puncture in one tandem on the way, then a blowout on Steve’s tandem on the gravel, ripping the tyre sidewall. A spare tyre fixed the blowout, but our early start was delayed a bit. The Westerly wind was reasonably friendly for most of the top section and warmed us up after we fell in a few times through the gorge. The low river flow meant hitting & scraping on lots of rocks, so the duct tape was well utilised repairing two of the kayaks that developed leaks.

After nine hours of leisurely paddling, slowed down by an Easterly change half way through the gorge, we made it to Waimakariri Gorge Bridge and met the others who had successfully shuttled the tandems and trailers around to meet us. We then biked to a friend’s house 8km out of Oxford, suffering two more punctures on the way in two tandems. Three people jogged the last couple of kilometres along a gravel section just to reduce the likelihood of puncturing again. Turns out the skinny spare tyre was not really up to the weight of two larger people. 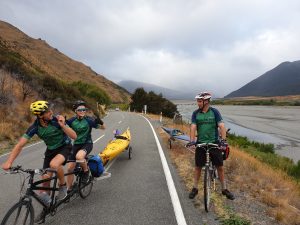 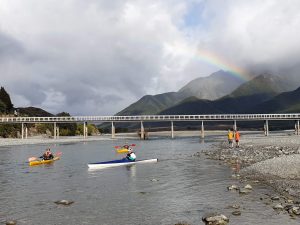 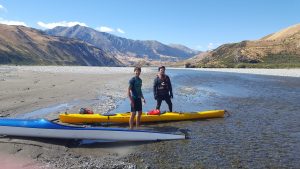 On Day seven we felt refreshed after lots of good food & sleep, so had the relatively easy grind across the plains back to Christchurch, with a couple more punctures to slow us down. By this stage we had used most of our patches and the spare tubes were getting pretty tatty, but we managed to get back to the Fanfare for the finishing photo. A couple of people had meetings to attend so we opted out of going to the beach for the finish. 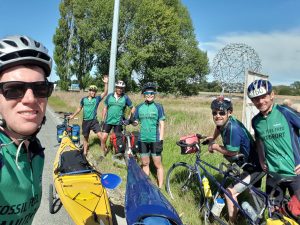 Overall it was a really enjoyable journey. The days were manageable for people of average fitness and the company was good fun. The multiple mechanical issues slowed us down but our repair kits generally got us through. Next time we will try larger volume tyres to cope with the heavier weight participants and restock the spare links we used for repairing the chains. There’s talk of a pack raft version of it if we can find some pack rafts without forking out too much money. A bike can be put on the front of a pack raft so everyone could raft down the river without shuttling gear around which could be interesting. Let Steve know if you are keen to join in. There may also be a shorter version somewhere around Banks Peninsula.