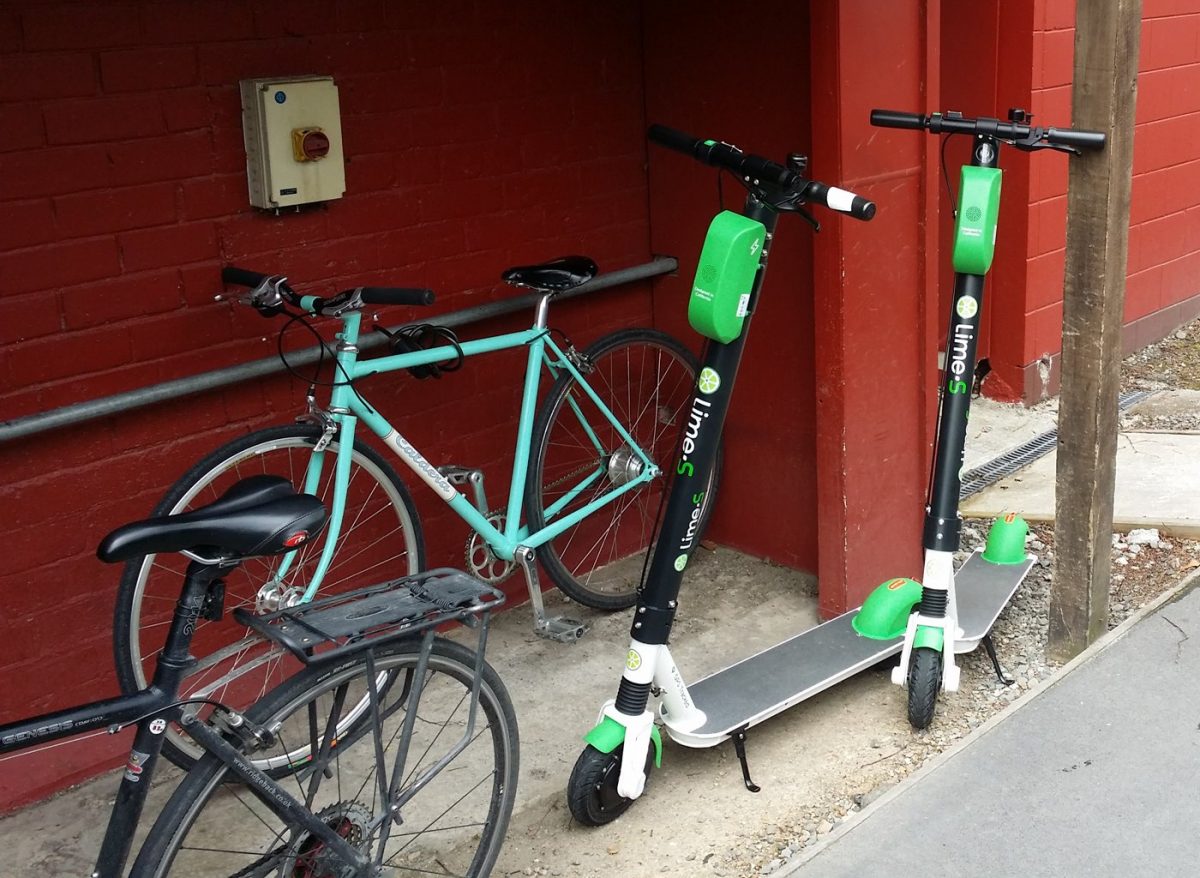 In case you have been living under a rock lately, it’s been two months now since Lime e-scooters turned up on Christchurch (and Auckland) streets. Judging by the volume of alarmist news articles and letters to the editor, you’d think that Donald Trump had suddenly been made NZ prime minister.

I don’t want to get into too much discussion here about the pros or cons of e-scooters in general (which have been legal in NZ since 2004 by the way); there has already been a lot written about that and clearly it polarises a lot of people (if you haven’t done so already, you might want to complete this CCC survey on e-scooters before next Wednesday). What I do want to look at is their interaction with cycleways and people cycling.

An e-scooter is legally classed as a “wheeled recreational device”, which basically covers anything with wheels smaller than 355mm and potentially with an electric motor up to 300W; skateboards, kick-scooters, roller blades and small children’s bikes/trikes also fall into this category. WRDs are interesting in that they can be used both on paths and roads, with a few rules around their behaviour in each case.

A lot of concern has been raised about the spectre of e-scooters on footpaths potentially travelling at up to 27km/h there and terrorising pedestrians (this seems to overlook the fact that we already have path use legislation prohibiting using paths at speeds hazardous to others – a bit more education and gentle enforcement needed?). Equally, people (including some riders) are concerned about these tiny vehicles mixing with motor vehicles on the general roadway.

So not surprisingly, many people see on-road cycle lanes and separated cycleways as the ideal location for people on e-scooters. There’s even a growing push internationally to redesignate bike lanes for a wider range of “mid-size” vehicles and devices. And it would seem that many scooter riders in Christchurch have already decided to vote with their wheels.

There’s just a couple of technical problems with that:

Bear in mind that generally these rules were drafted long before mass e-scooter usage was even thought of as a possibility. But it does mean a current dilemma that probably needs resolving. And the Ministry of Transport and NZTA have been pondering their options for tweaking the rules.

So would simply allowing e-scooters to legally use all cycleways be the best solution? No doubt many pedestrians would be pleased to have fewer people whizzing past them on footpaths. And motorists and e-scooter riders alike may both prefer not to have to share the same roadways (we just had an e-scooter vs truck crash in Auckland). But is that simply transferring the risk to people cycling? Already in the past week we have seen a serious collision between a cyclist and an e-scooter on a cycleway in Auckland (note that neither of the crashes above actually involved a Lime scooter).

Of course, the point is currently moot on the 90% of Christchurch streets that don’t have a cycleway or cycle lane anyway, so motorists and pedestrians couldn’t entirely bid adieu to e-scooters. On the bright side, having to consider the needs of both cycle and e-scooter users could improve the case for building more cycleways (or “micro-vehicle lanes”)…

It’s also important to put into context the actual risk we’re seeing with the appearance of a lot of e-scooters. The occasional crash may make the newspaper headlines but, rather like cycling, all the mostly safe and successful journeys do not. Idiots will be idiots, no matter what they’re travelling on, but I think I’d sooner face a lot more e-scooters around town than an equivalent number of extra motor vehicles (you know, the things that are actually killing many NZ active mode travellers every year…).

What do you think about cycles and e-scooters sharing the same spaces?

8 thoughts on “Can e-scooters and bikes co-exist?”