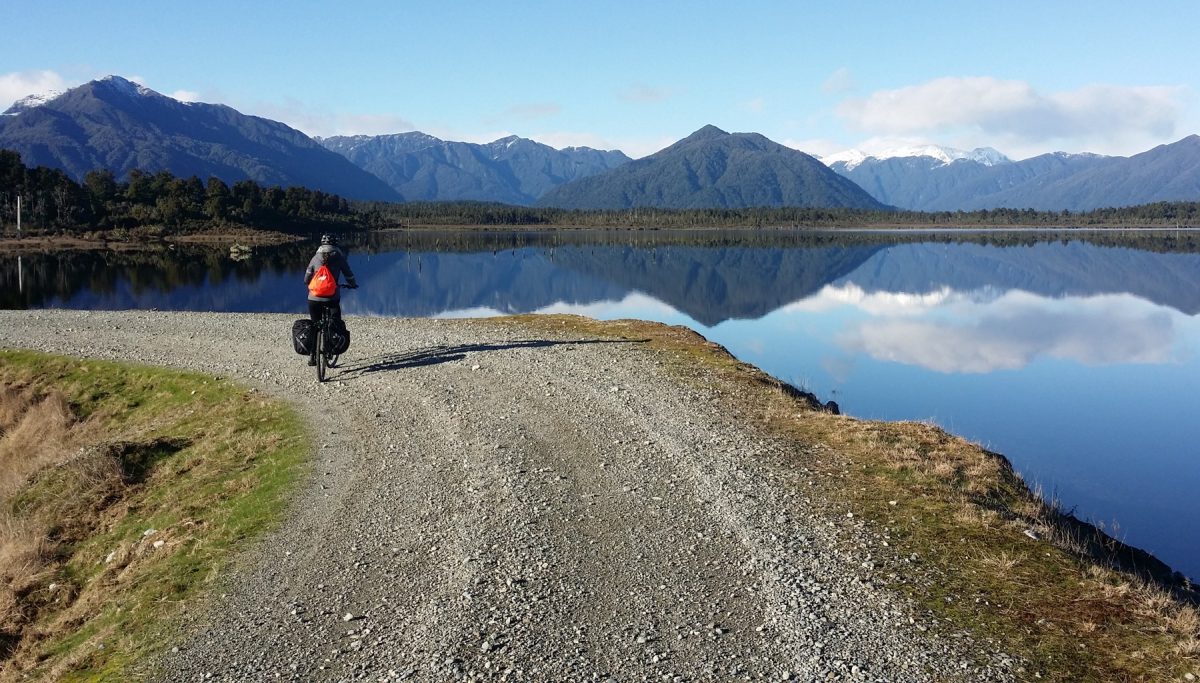 Last week I spent a few days on the West Coast of the South Island checking out the West Coast Wilderness Trail, one of the 23 routes that currently make up the NZ Cycle Trail network. The route winds its way south from Greymouth to Ross via Kumara and Hokitika. With my daughter we spent three days exploring the trail from Greymouth down to Hokitika, with a side excursion to check out a bit of the southern section near Lake Mahinapua.

Although officially opened in late 2013, the Wilderness Trail still has one or two sections being finalised even now. The route largely takes advantage of a number of historical forest railway routes and embankments alongside water-races and hydro-scheme canals and lakes. This means that, for much of it, the gradient is very gentle and hence manageable by most people.

Starting from Greymouth, the route follows the Greymouth River floodwall out to the breakwater at the river mouth. From there, the route turns south and winds its way along the beach sand dunes before rejoining the state highway near Paroa. A separated pathway follows the road down to the Taramakau River bridge (where the current combined road-rail bridge is finally giving way to a brand new road bridge).

Once across the Taramakau, the cycle trail follows the line of the old Greymouth-Kumara tramway through dense native forest. Nearing Kumara, a suspension bridge takes you across the spectacular “Chasm”, a very deep gully feeding into the Taramakau.

Heading out of Kumara, the route winds its way past the Kapitea and Kumara Reservoirs, part of the Dillmans Power Scheme. There is a real mixture here of forest ride, open embankment paths and even boardwalks. The route continues to climb gently, following the Kawhaka supply race canal and then the Kawhaka Creek itself.

Eventually you reach the highest point of the ride, the Kawhaka Pass (317m); the route then heads down a water-race access track. Crossing over a couple of fords where the hydro scheme collects water from some tributaries, perhaps the nicest section of the trail follows with a gently downhill path through the forest that is literally just “brake and steer” – very cruisy…

There is a bit of a zig-zaggy downhill section after this and another suspension bridge before you reach “Cowboy Paradise” a wild-west style oasis in the middle of nowhere. Here you can rest up for the night or just grab a bite to eat on your journey.

The trail after this leads down to the Arahura River valley in a series of large switchbacks (you could almost do the whole thing without pedalling). The route then follows the access road along the river valley before climbing up rather steeply and over the hill to Lake Kaniere.

Formed by a glacier during the last ice age, Lake Kaniere is a great place to get a few more scenic snaps. Once on your way again, the trail follows yet another old goldfield water-race through dense forest and eventually linking up with the waterways leading to the McKays Creek power station.

After this follows a longish (8km) on-road section through to the town of Kaniere. Finally the route reverts to an old tramway route alongside the Hokitika River to lead into Hokitika township.

Heading south from Hokitika, the trail runs along a path on the bridge at the mouth of the Hokitika, then follows a quiet country road past the golf course. For now, the next bit follows SH6 for 2.5 km (at least until a new trail section is completed along the Mahinapua Creek) before entering the Mahinapua Scenic Reserve.

Forest paths and boardwalks lead you to the historic Mananui Tramway corridor through the forest that used to to bring timber to the old sawmill. There are side options to hop over and have a look at scenic Lake Mahinapua. Or, when the trail reaches the road on the other side, you are only a couple of kms from the famous West Coast Treetop Walk.

The final section (which we didn’t ride) takes you back to SH6 and then follows the old Hokitika-Ross railway corridor south past wetland and lagoons. Finally the trail turns left to finish in the nearby township of Ross – 132km from your start point!

Although the route rises to over 300m above sea level, in the main it follows very gentle corridors that make the climbs easy (especially I would say if you are travelling north to south). There are still a few sections where the less keen/fit might want to get off and wheel their bikes on foot (we did); but soon enough you are rewarded with another cruisy downhill run.

It’s generally pretty easy to manage the downhill sections on your brakes too, with the bit just north of Cowboy Paradise perhaps the most challenging due to its S-bends (but still far better than most MTB tracks).

Even though we arrived there after days of rain, the surface was generally very good and well-draining. Both of us used our standard commuting bikes with panniers on the back rack and that was perfectly fine for the trail paths. 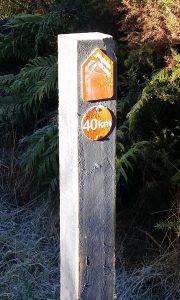 Navigation along the way is pretty good, with distinctive orange route signs along the way; probably only a couple of times did we get a bit confused (e.g. when the road and the trail both turned right at the same time…). Regular kilometre route markers also let you know how far you’ve come (or more importantly how far to go…) and provide a reassuring encouragement as you go.

There are relatively few sections where you have to share a road with traffic, the busiest probably being the (soon to be diverted) section of SH6 near Mahinapua (maybe one vehicle every five minutes?).

For the most part, the “roads” you have to use are very quiet; sometimes one vehicle an hour – we spent 10 minutes standing in the middle of the road east of Lake Kaniere taking photos and didn’t see anyone.

There are plenty of accommodation options for you along the trail, depending on how far you want to travel each day; we stayed at places in Kumara, Lake Kaniere and Hokitika. Cowboy Paradise is another popular mid-ride stopover. If you need to sort out transport logistics to get to and from the start/end of your journey there are a couple of local transport shuttle providers (or you could do like I did and just grab an InterCity bus back up to where my car was). 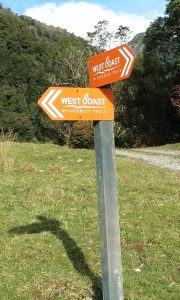 As an introduction to the cycle trails on offer around New Zealand, the West Coast Wilderness Trail is a brilliant way to see a lovely part of the country (and hopefully you get weather as wonderful as we did…). Whether you do the whole thing or just dip into parts of it, this is a very family-friendly ride away from the hustle-bustle of city life.

Have you ridden the Wilderness Trail?  What did you think of it?