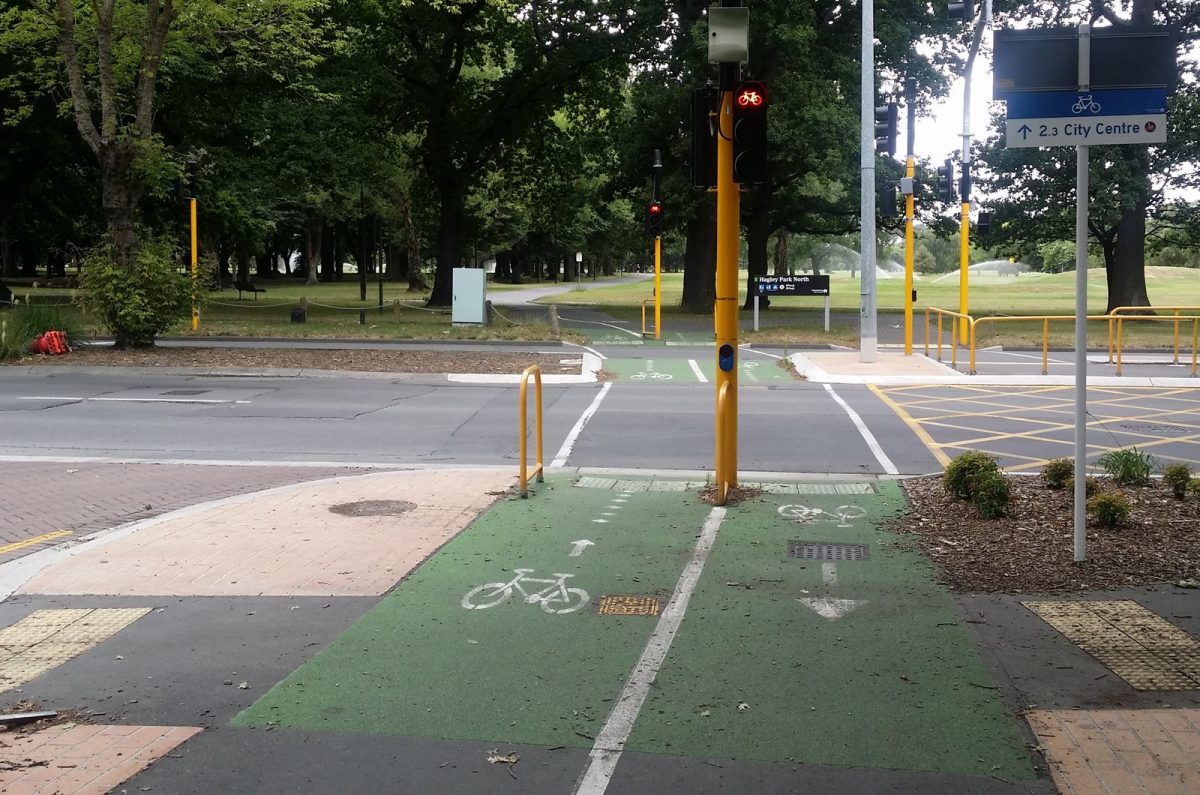 Here’s a bit of an idea I’ve been pondering for a little while: We’re all used to the traditional “chirp” or “buzz” that accompanies the ‘green man’ signal at most pedestrian crossings; in fact, it seems odd when it doesn’t exist (Worcester/Montreal and Hereford/Manchester: I’m looking at you…).  These audible sounds of course serve an important function for vision-impaired pedestrians trying to get around the city. But in this hi-tech world, where many people seem to be perennially focused on their smartphone or some other distraction; having an audible cue is also a useful wake-up call when it’s time to cross.

Now we’re starting to see a lot of signalised cycle crossings popping up around the city as part of the Major Cycleways. When they operate in tandem with a pedestrian crossing there is of course the traditional audio signal also telling you it’s time to get moving. But increasingly we’re seeing stand-alone cycle signal crossings that don’t feature the pedestrian sound.

This is perhaps not surprising if there’s nowhere for pedestrians to formally cross but, as someone who has grown up with the “Pavlov dog” reaction of crossing when the sound plays, it seems very odd to be crossing on your bike with no audio cue backing up what you see in the signal. I suspect too that, for those used to having the familiar sound at many combined crossings, it might be quite easy to get distracted and not actually notice that the silent green cycle signal has illuminated. Given that some of the cycle crossing phases are very short, not getting away immediately could potentially prove quite unsafe.

So what to do about this? Well, I can see that it wouldn’t make much sense to use the standard pedestrian audio sounds at a cycle-only crossing (wouldn’t want to confuse any vision-impaired person nearby). So a different sound would need to be created. Which led me to this little thought: what about a bike-bell style “ding ding”? It’s a clearly unmistakable sound that we all recognise and would seem intuitively linked to biking. Just like people dinging their bells on shared paths, if there were any pedestrians around, it might also have the added side benefit of warning them that some bikes were about to cross their way as well.

While we’re talking about signals; something else on the horizon: there will be a number of formal trials of new combined pedestrian/cycle signals around Christchurch and other cities. Some of these will feature red/green signals for pedestrians and cycles side by side (remembering that normally cycle signals also include an amber signal as well); some will even have the pedestrian and cycle symbols within the same signal aspects (quite common overseas).

When it comes to trials though, I’d love to also see a few cycle crossings featuring a “ding ding” sound to help fill in the silence…

Do you miss having an audible signal at all cycle crossings?

3 thoughts on “Do cycle crossings need a bell?”