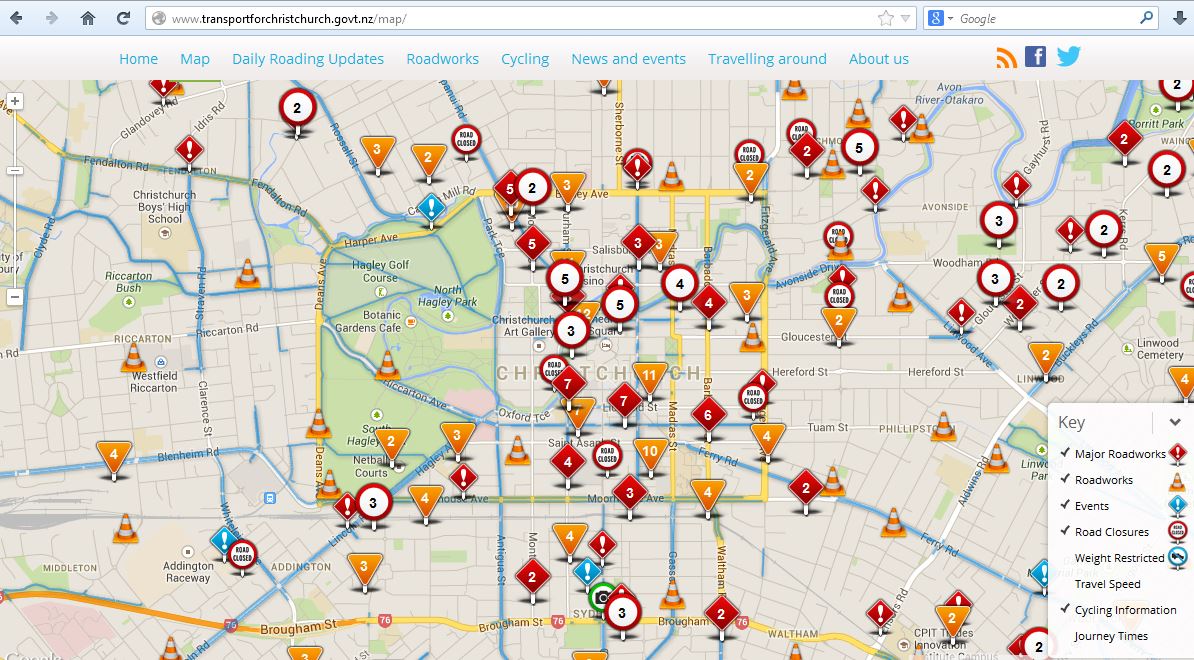 One of the outcomes of the quakes has been a greater emphasis on collaboration by the various organisations involved in delivering transport facilities and services around Chch. Partly this has been driven by the significant upheavals in our transport patterns post-quake, firstly due to land-use shifts/changes and now with the never-ending street works and road closures to patch things up (and occasional storms/floods…). This led to the development of the Chch Transport Operations Centre (CTOC) to oversee all this, and the creation of an overarching website “Transport for Christchurch” (TfC) – there’s also now a smartphone app for iOS and Android.

Obviously a lot of the work that CTOC do is focused on how to move motor traffic efficiently and safely around the city. But they also acknowledge the very important role that other transport modes make to keeping this city moving, and that includes cycling. The cycling part of the TfC website contains a variety of information, including:

Staff from the travel information team with TfC have recently had discussions with key cycling stakeholders over the provision of information on the website. They are keen to know what is useful, what’s not, and what is missing. For example:

It may be that some of this information is best collected by “crowd-sourcing”, i.e. using the collective wisdom of the public to highlight the good and bad stuff (and when it changes). We’ve already highlighted some examples of that before via GoogleMaps and FixMyStreet. There are also some notable examples overseas where similar initiatives have been used to help identify the best/worst places to ride, such as in Berlin and Melbourne. It may be that we can even come up with a clever way to link it to Cycling in Chch, so that we can provide yet another useful service to you – I’m happy to talk to anyone interested!

If you can think of some other ways that TfC could provide better useful information for people cycling, put your comments here and we’ll make sure that the TfC staff see them.

1 thought on “Feedback wanted: Is “Transport for Chch” useful for you?”