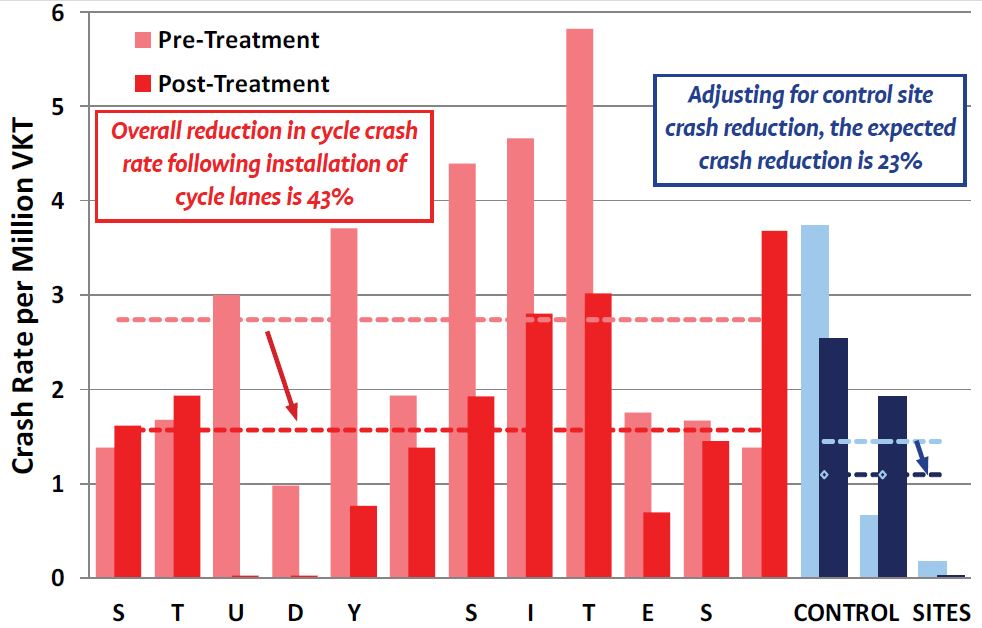 In the past 5 years or so, we have seen a significant roll-out of the Major Cycleway programme around Chch, which has been fantastic. That doesn’t mean that traditional painted cycle lanes have been completely eschewed; I can think of recent projects on Hereford St, Victoria St, and Main Rd (Sumner) as examples where they have been implemented. And while they don’t have the “all ages and abilities” appeal of our new cycleways, this post (originally from Feb 2014) reminds us that they still have a safety benefit for those already out cycling…

The planned Major Cycleways for Christchurch will comprise a mixture of treatments: separated bikeways, shared paths, and quiet streets (“neighbourhood greenways”). These are designed to attract a lot of new “interested but concerned” people to cycling (or cycling more) who are a bit threatened when faced with too much motor traffic nearby. What’s not expected to be a major part of these main routes are conventional on-road painted cycle lanes.

Christchurch has developed a significant network of such cycle lanes over the decades, on more than 100km of roads. Along with the network of off-road pathways, they have probably contributed to holding cycling use in Christchurch reasonably static when most of the country’s cycling use was declining. But along the way, cycle lanes have received a bit of a bad rap. They even contributed to a moratorium on cycleway construction here in Christchurch back in 2005, with then City Councillors calling many of them “unsafe”.

So do cycle lanes deserve this reputation? Perhaps surprisingly there has been relatively little research internationally about the safety of cycle lanes (although that is starting to be redressed). A common problem is the lack of good cycle crash data, and an even harder problem is a lack of good cycle count data. The latter is important because cycle count numbers might change when a cycle lane is built. If, say, a new cycle lane attracts double the previous number of riders but crash numbers go up by only 50% then the crash rate per cyclist has actually fallen by 25%.

Fortunately, Christchurch has relatively good crash data and cycle count data going back since before 2000. So a recent study took advantage of that to investigate the effect of constructing twelve new cycle lane routes around the city in the mid-2000s. These were a fairly standard collection of on-road cycle lanes, some next to the kerbside and some next to parking. The results were presented at last year’s IPENZ Transportation Conference in Dunedin (see conference paper – PDF).

Cycle crash and count data for each site were collected for about five years each side of construction. This enabled a comparison of “crash rates” (per cycle-km travelled) before and after the cycle lane treatments. To check that the results weren’t being affected by other external factors, three other cycle lane sections constructed before 2000 were used as “control” sites over the same period. The small crash numbers (often less than 1 per year per site) mean that the results for each individual site can vary a bit. But collectively, there was a very impressive 23% reduction in cycle crash rates after the installation of cycle lanes.

The results suggest that well-designed cycle lanes help improve the safety of those using them. There are probably a number of reasons for this, including:

Note that I said “well designed” – fortunately most of Christchurch’s cycle lanes have been provided with industry best-practice widths and layouts (although we can all think of a few pinchpoints…). Unfortunately the same can’t be said for some narrow, stop-start cycle lanes around the country and that can make the cure worse than the disease; poor maintenance also doesn’t help their usefulness.

It is for this reason that Christchurch is likely to continue to provide on-road painted cycle lanes where they are warranted on busier routes that are not part of the Major Cycleway network. They are a very cost-effective way to provide some safer space for cycling. But it is also accepted that they won’t be the way to get more people cycling – and that’s where the Major Cycleways Programme comes in…

What do you think of painted cycle lanes?