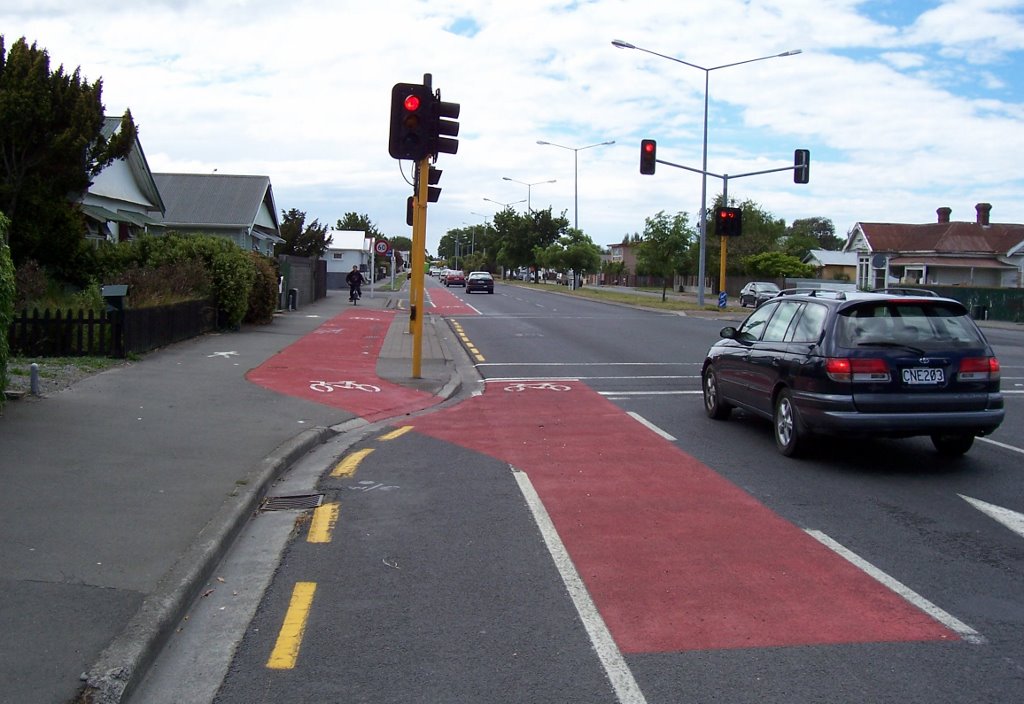 Gah, it feels like all I have managed to do lately on this site is recycle a few posts for Flashback Fridays, even though I have a bunch of other post ideas half-done or fermenting in my mind. Sorry folks, life is currently getting in the way… In the meantime, consider this discussion, originally from Jan 2014, about these clever little cycling workarounds. The new Major Cycleways feature a few similar bypasses – could there be other locations?

It’s always nice when you can get an advantage over motor traffic by cycling instead. Some people riding already do this by sneaking through intersections when other traffic is stopped. This doesn’t tend to do much for cycling-motoring relations (as has been implied by recent events in Auckland), but there are ways to legitimise these behaviours via special cycle facilities.

In Christchurch, there are a couple of neat examples of how this can be done. Firstly, out in Linwood, at the Buckleys Rd – Russell St intersection, there is a cycle bypass of a signalised T-intersection. The bypass allows riders at the top of the T to go around the intersection via a shared path shortcut.

Another common issue is turning left on red; again it’s common to see a bike rider sneak around the kerb corner. However, until we see a law change to allow that all the time, you’ll need a special slip-lane to do it legitimately. Here in Christchurch, one of these has already been created:

At the Moorhouse-Waltham-Barbadoes intersection, a slip lane is provided on the Waltham Road approach to allow riders to hop up onto the footpath and go around to Moorhouse Ave. The design is fairly good at minimising the potential for conflicts between walkers and riders.

These kinds of little advantages are fairly common overseas. For example, here are some bypass facilities from Odense in Denmark:

These types of facilities are relatively easy (and inexpensive) to implement. So they could possibly form part of the “quick wins” Cycling Targeted Improvements planned for Christchurch.

What do you think about these cycle bypasses? Any other places where they could go in Chch?