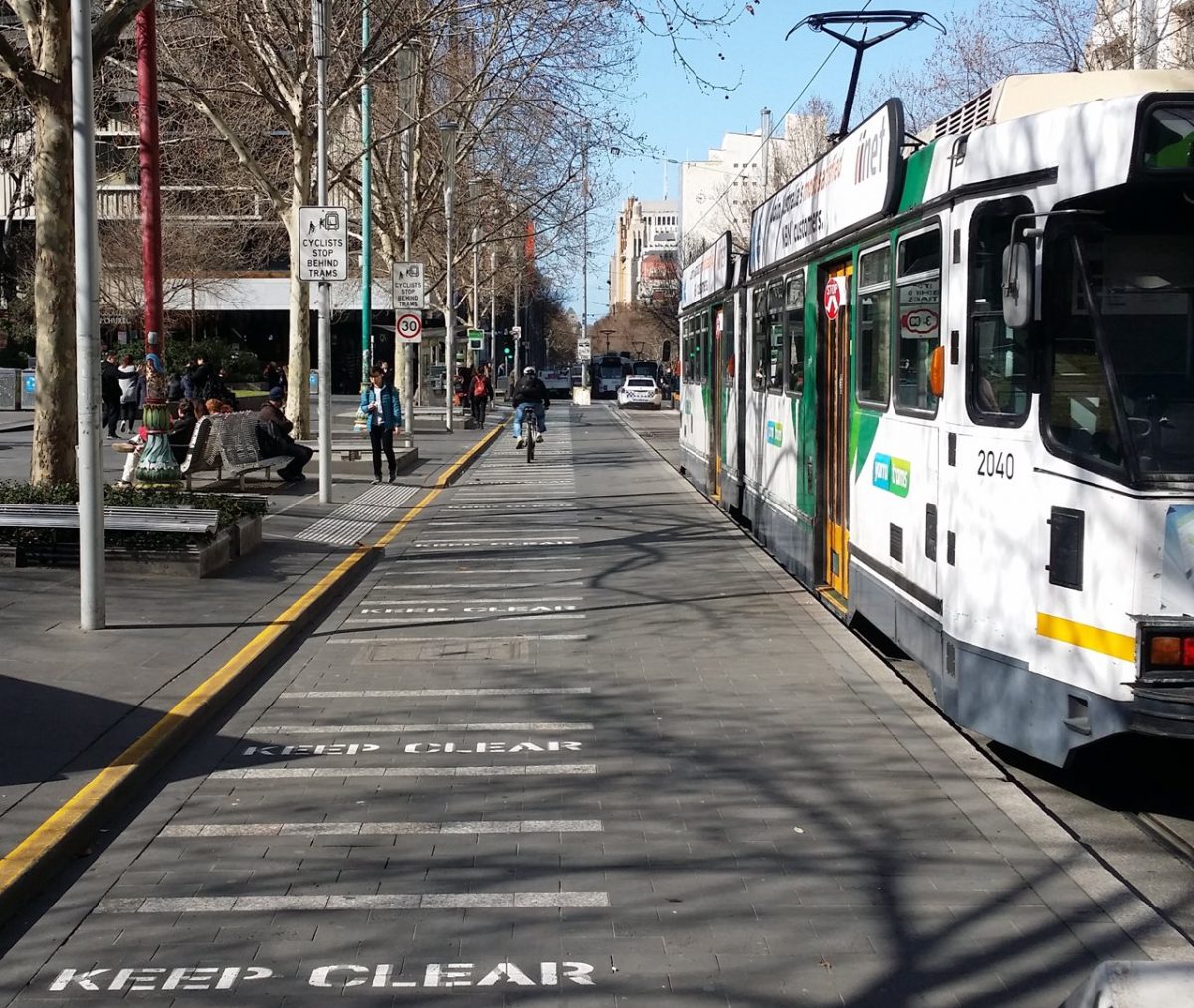 This post is long time coming; too many other distractions since, like Biketober… I was lucky to head across the ditch in September for a couple of week’s holiday in Australia. We started in Melbourne and then drove the coastal route to Adelaide (highly recommend it, by the way). I’ve blogged in the past about Adelaide and its various cycling features, but it’s been 12 years since my last visit to Melbourne, so I thought it was worth a comment or two.

The Greater Melbourne area is of course huge, with a population not too dissimilar to New Zealand. We certainly didn’t check out all of it, largely focusing in the central city, the inner suburbs around Brunswick/Carlton, South Melbourne, and St Kilda beach. Like many large Anglo-centric cities, cycling does not make up a big part of the picture, accounting for less than 2% of all trips in Melbourne. However, those figures get considerably higher as you move towards the centre; for example, bikes made up 16% of all vehicle movements into the central city in the morning-peak period (March 2017).

We had a full three and a bit days to explore Melbourne, and I certainly kept an eye out for any cycling-related observations. I didn’t have to look far – immediately outside our apartment, separated bikeways ran along the sides of the street.

The other thing that caught my eye almost immediately were the dockless share-bikes located at various points along the streets. oBike was the company in question that had placed their distinctive silver and yellowy-orange bikes across the city, some neatly parked, some less so.

Closer inspection of the oBike basket revealed instructions on how to tap into using these bikes. All you need is a smartphone app and your credit card ($1.99 per half-hour, mind you).

oBike landed in Melbourne last June and has landed in some hot water (and cold water…) for creating visual pollution. Local councils are now setting rules about their use and placement, which makes sense, and I certainly didn’t notice huge issues with their presence on the streets. Interestingly all the while, the existing docked “official” Melbourne Bike Share system also still co-exists.

Melbourne is well known for its trams and they permeate the central city in a big way. A real challenge is how to safely fit trams, pedestrians, bikes, and sometimes motor vehicles all into the same road corridor.

A lot of signs and markings are used to try to make it clear where the conflict zones are, and what people should do, with varying degrees of success.

In fact, Melbourne seem to be pretty hot on signs and markings to try to regulate path behaviour in the same way as road behaviour.

Like many Australian states, Victoria allows children under 12 and their caregivers to ride on ordinary footpaths. There are also plenty of designated shared paths, although the choices (or not) didn’t always seem logical.

Away from the central city, cycleways separated from both traffic and pedestrians were relatively rare. There were pockets, like in St Kilda, but plenty of other places where a painted cycle lane was about as good as you could expect.

As you might expect for a city of its size, Melbourne is a mix of good cycling infrastructure and some decidedly average street environments. Integration with public transport is a key in Melbourne, and the various bike-share options are certainly helping there. But the ultimate test is how many people are biking, and even on the weekdays it didn’t feel like huge numbers (admittedly during a fairly chilly September spell). The apparent lack of cohesion about providing seamless biking networks across Melbourne is probably making it hard to get a lot of traction – more work needed…

Have you visited Melbourne? What did you think?

1 thought on “A postcard from Melbourne”