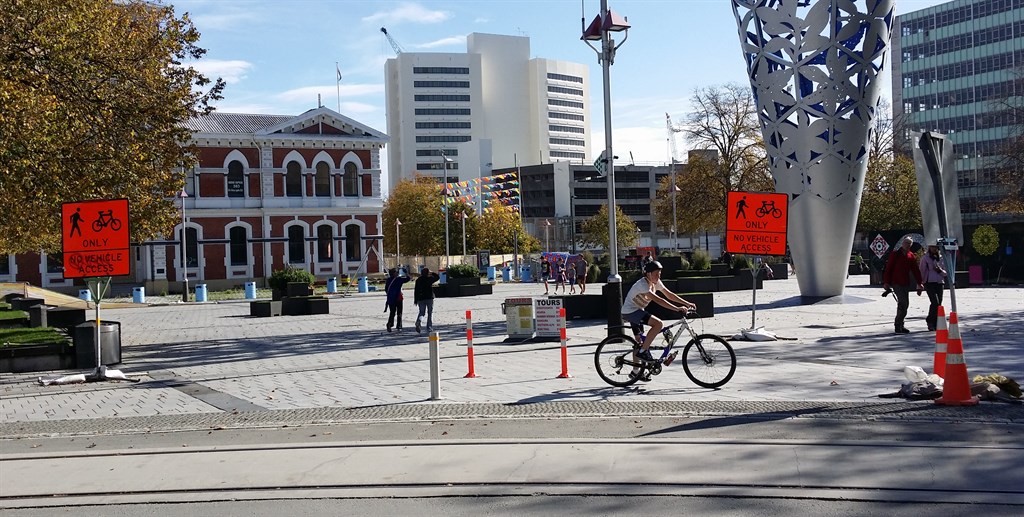 With the rain returning today, it’s easy to forget that we just had three glorious day of sunshine. And so it was on Saturday, with my youngest boy at a loose end, that we decided to hop on the bikes and go explore around the central city (aka “town”). These days it seems that every time you visit town something else has gone up (or down), and exploring it by bike is the best way to see it in detail and cover good distance too.

On the way in, at the outskirts of town, the newly upgraded Washington Skate Park was a hive of activity (not surprising since it was the first fine day since it opened). It might be called a skate park, but anyone with a bike, scooter or skateboard will find something to enjoy in the much enlarged new layout. My boy’s eyes lit up and no doubt he will be back at “The Wash” soon…

On to the Central City proper and you start to discover all sorts of nooks and crannies in amongst the rebuild. Life may be a bit frustrating for motorists trying to get around town between all the street closures, but generally that’s not an issue when on foot or bike. Usually there’s a path now available (e.g. up High Street from CPIT has now reopened) that a bike can also take advantage of (as always, take care around those walking though).

It’s the same in much of the city and made exploring quite pleasant. In some places big bright orange signs further lend a welcoming sign to those on foot and bike only – it would be nice to see a permanent version of these in the final rebuild for the planned motor traffic-free areas.

Heading away from the Square we saw the recent efforts to prepare the East Frame of the new central city. Where previously there were buildings, a new expanse of green is slowly developing between Manchester and Madras Streets. In time, a walking/cycling corridor here will provide a friendly link from CPIT up to the Avon River (street crossings will be crucial!), while a number of people will also be able to live alongside with the corridor on their front door.

While in town we also headed west to Hagley Park for a brief circuit. The recent rains have created a number of new lakes amongst the fields. However they also make the going tricky along the main bike path in from Riccarton/Fendalton. Riding through the water was great fun for my boy, but it’s a bit poor for probably the busiest cycle path in the city to be regularly covered by a bit of water. As we’ve alluded to before, time perhaps for the Council to raise it up a bit?

Returning back to the city past the hospital and we could see some activity happening on the Boatshed Bridge at Antigua St. Judging by the limited information from SCIRT, it’s hard to know whether they’re still trying to pull the bridge apart to take away and fix, or putting it back together (I suspect the former). So we could still be waiting a while before we can use this again. This is such a major connection point in the city for walking and cycling, yet one wonders if it would have taken so long to fix if it was a major motor traffic bridge…

Great to see the progress being made on the Arts Centre rebuild, although clearly there are many years still to go there. Still, there were plenty of people around the Botanic Gardens and Museum and along Worcester Boulevard. One problem for cycling is that the Boulevard consists of two facing one-way sections, so technically you can’t legally ride the whole distance in one direction. Given that the tram route is partly contra-flow here and the adjacent path is also quite wide, it would seem easily feasible to legitimise what plenty of people already do – ride the whole length.

The jewel in the crown during the initial days of the rebuild has undoubtedly been Re:START in Cashel Mall, and Saturday was no different in terms of crowds. It’s great to hear that the Mall will get a temporary stay of execution by relocating while the new permanent facilities are being built. The Mall operators may like to pretend that no-one bikes to the Mall, but two- and three-wheeled velocipedes were in evidence everywhere.

In fact, as is so often the case these days, any available bike parking was well snapped up around the city (such as the styly bike racks at the end of Cashel Mall). If this is the demand now, think what it will be like when the Major Cycleways are completed!

It’s encouraging to see plenty going on in town, whether it’s normal everyday activity or the development of future activity. And it’s great to see so many embracing the bike to get their way around (at least on a nice sunny day anyway). While some people still seem to see doom and gloom everywhere (and no doubt there’ll be some things that don’t pan out as well as we’d like), I tend to see incremental improvements every time I revisit town. Are they fast enough? I’ll let you decide…

How do you find getting around central city by bike these days?