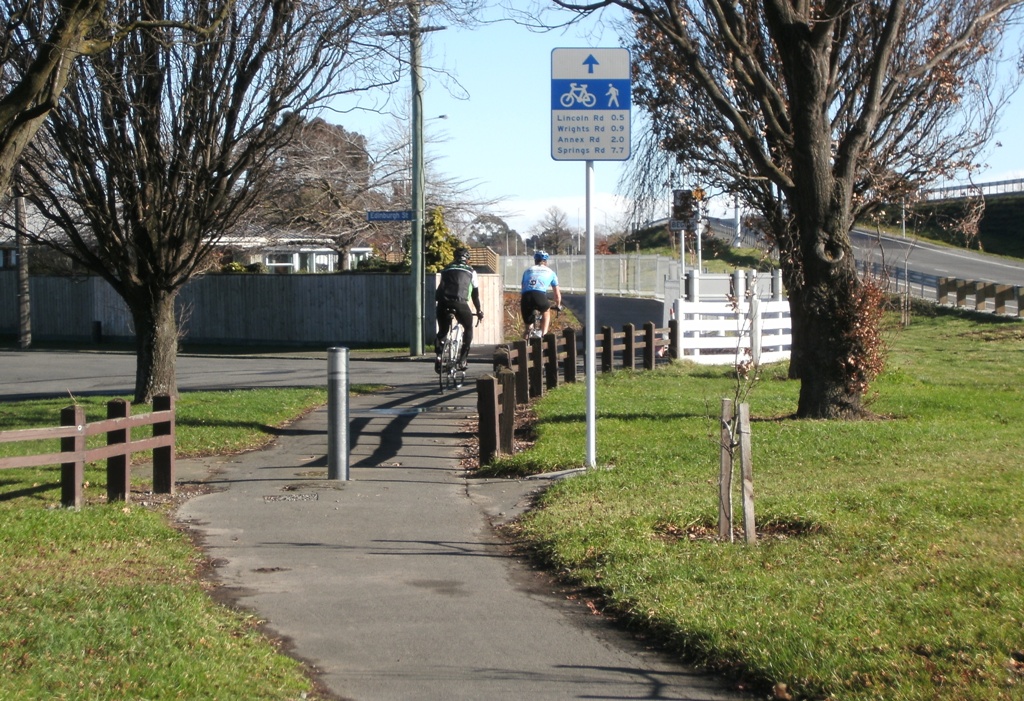 A few months ago now, we showed you some pics from the western end of the new cycleway along the Chch Southern Motorway. At the time we were hoping that the last part of the cycleway wouldn’t be too far away from sealing and tidying up (seeing as the motorway project was supposedly completed “on time” last December). And then March came and went… and April… and May… Evidently someone finally got on with actually finishing the job (good thinking; let’s wait until after the long dry summer to seal the pathway…), yet even in June there was a short section still waiting to be completed.

Finally we can now show you what all the fuss has been about. However, unlike the western end, which (for the most part) provides a really nice off-road facility, you can’t help feeling that there were a few missed opportunities to get the eastern end better than what’s there. It’s notable that, because it was completed as part of an NZTA state highway project, there wasn’t the same opportunity for consultation on details about the final cycleway design as we typically see for a City Council project…

First, let’s get our bearings. When we last left you, we had just finished on the existing pathway that spits you out at Wigram Rd. For now there’s no option but to make your way east along Wigram Rd to the pathway that veers north to Lunns Rd (or alternatively head south on the pathway to Lincoln Rd). However, within the next two years, a new road link will be constructed connecting Wigram Rd over Curletts Rd to Magdala Pl and on to Birmingham Dr. This new “Wigram-Magdala Link” will include both cycle lanes and a 2.5-3.0m shared pathway, which will connect the western end of the cycleway with the existing Annex Rd cycleway.

Having gotten ourselves to Annex Rd, we now rejoin the existing cycleway that runs alongside the southern motorway towards Wrights Rd. Unfortunately the motorway project didn’t include any work to upgrade the existing somewhat narrow pathway, so we may have to wait and see whether some further improvements are in store later for this “major cycleway”.

On to Wrights Rd and the pathway has been taken underneath the motorway overbridge to run down the opposite side. This involves creating a new shared pathway across the Hillmorton St side-road to a new crossing point.

The central island helps with crossing what can be a busy road. However, I do feel they missed a trick or two here. Firstly the remaining gap between the kerb extensions and the central island is rather tight for those people cycling along Wrights Rd rather than across it. And, rather than crossing a side-road and a number of driveways with the shared pathway, wouldn’t it have been simpler to run it along the other (uninterrupted) side of the road?

At least the new pathways in between the roads are generally well done; with good width and signage. And with the elevated roadway, there is little noise to speak of.

On to Lincoln Rd and there’s another “at-grade” crossing of the four-lane roadway using a central median as a halfway house.However, this is an even busier road than Wrights Rd, so crossing here without priority can be difficult at certain times of the day – CCC have indicated that they will look at the possibility of installing a signalised crossing here.

BTW, is it just me or does it feel like overkill to have to use “cycleway ENDS/BEGINS” signs at every single crossing point? Yeh, yeh, we get that we don’t have priority crossing the road; we don’t need signs to tell us this.

Throughout the cycleway, one of the nice features has been the introduction of various destination signs showing how far it is to various intermediate points (almost too precisely, actually). Signage like this will help less familiar riders know where all this new infrastructure can take them to.

Once at the Barrington St intersection, the picture becomes less clear about where to next. In earlier project plans that I saw, the pathway continued east to Simeon/Collins St, which made sense as there is a fairly good north-south cycle route there. But for now there is nothing, despite plenty of space to do so.

CCC are considering an alternative link through the park immediately to the north-east; however that won’t be of much use to anyone wanting to head south down Simeon St.

Finally at the Simeon/Collins St intersection itself, the previous signalised intersection has been closed off, but a signalised crossing retained for pedestrians and cyclists. Unfortunately, someone in their wisdom felt that putting a ridiculously long median zig-zag made sense, coupled with some really awkward crossing points to get to/from on each side.

So there you have it. With the impending construction of the Wigram-Magdala Link, this will now provide a continuous pathway connection all the way from Barrington / Brougham Sts to Halswell Junction / Springs Rds. But, for one of the Council’s designated “major cycleways”, it feels a bit under-done in places.

What do you think about this new cycleway?