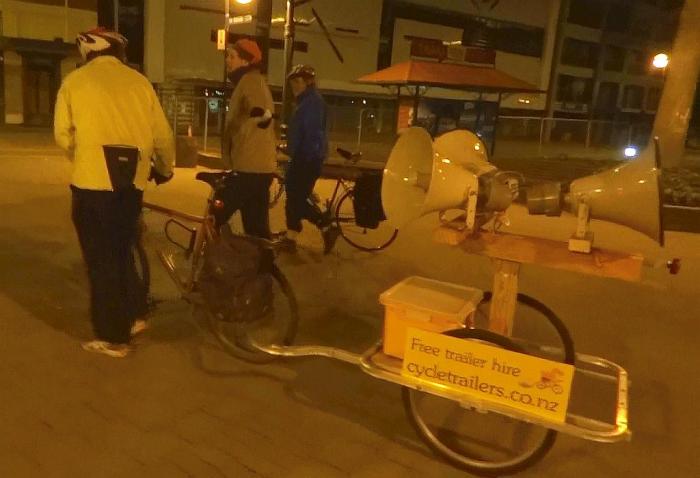 Unfortunately Ciclovia/open streets planned for the 14th July was postponed until 29 Sept, but we had a volunteers briefing on the Thursday 11th and I took along the mobile sound system trailer I had built up for the Ciclovia to trial. It has the ability to play cycle & walking related MP3 songs from an SD card, using three horn speakers provided by the Green Horn Company. It also a radio microphone which was used for public announcements. It didn’t get a rigorous time test but should last for many hours on a smallish 7AH sealed lead acid battery. Sensitive electronics where in a rain proof plastic bin and the horn speakers are waterproof so it can all cope with some rain. While it was great fun for the volunteers evening and will be very good on 29th Sept, its probably not that practical for everyday use as the top-heavy nature of the speakers does impact the stability of the trailer and limit your top speed somewhat. So I can’t foresee an ‘arms race’ developing between cyclists and boy-racers as to who has the loudest sound system on the road.