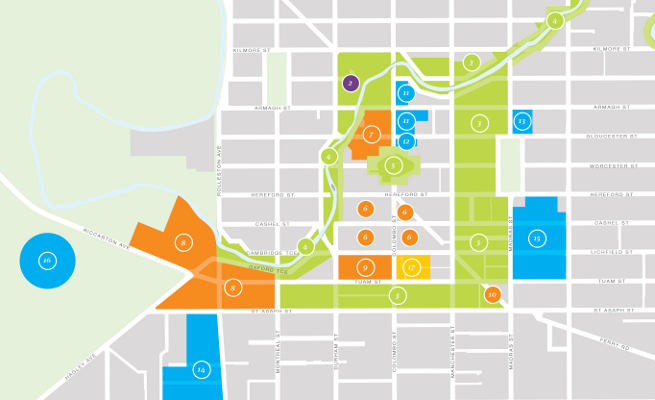 Last Monday, CERA’s Central City Development Unit (CCDU) released their Central City Recovery Plan, promising a more compact central area, bounded by a green “frame” and home to a number of designated precincts for different activities. Having had a few days to digest its implications and see some feedback from others, what are the likely implications for cycling in the city?

Here are the key elements that seem to have some implications for cycling:

It is important to remember too that what was released last week was a land-use plan. Now that this provides more certainty, CCDU can work on developing the accompanying transport plan (you can’t plan how to move people until you know where they’re going…); indeed that has been identified as one of the priority tasks for the next 100 days.

The cycling-specific feedback from people interviewed by The Press was generally fairly positive. Clearly two concerns were:

In both cases, that’s why it’s vitally important to make submissions on the draft Christchurch Transport Plan currently out for consultation (I’ve no doubt that it will end up tying in with the CCDU Plan more now). There are a lot of great ideas for cycling proposed in that, but it’s important to let Council know that they are still very much wanted, and wanted SOONER rather than later. Submissions close Thu 23rd August – have your say!

What do you think about the Central City Plan? Will it help to make cycling better in town?

1 thought on “Is cycling a part of the new Central City Plan?”