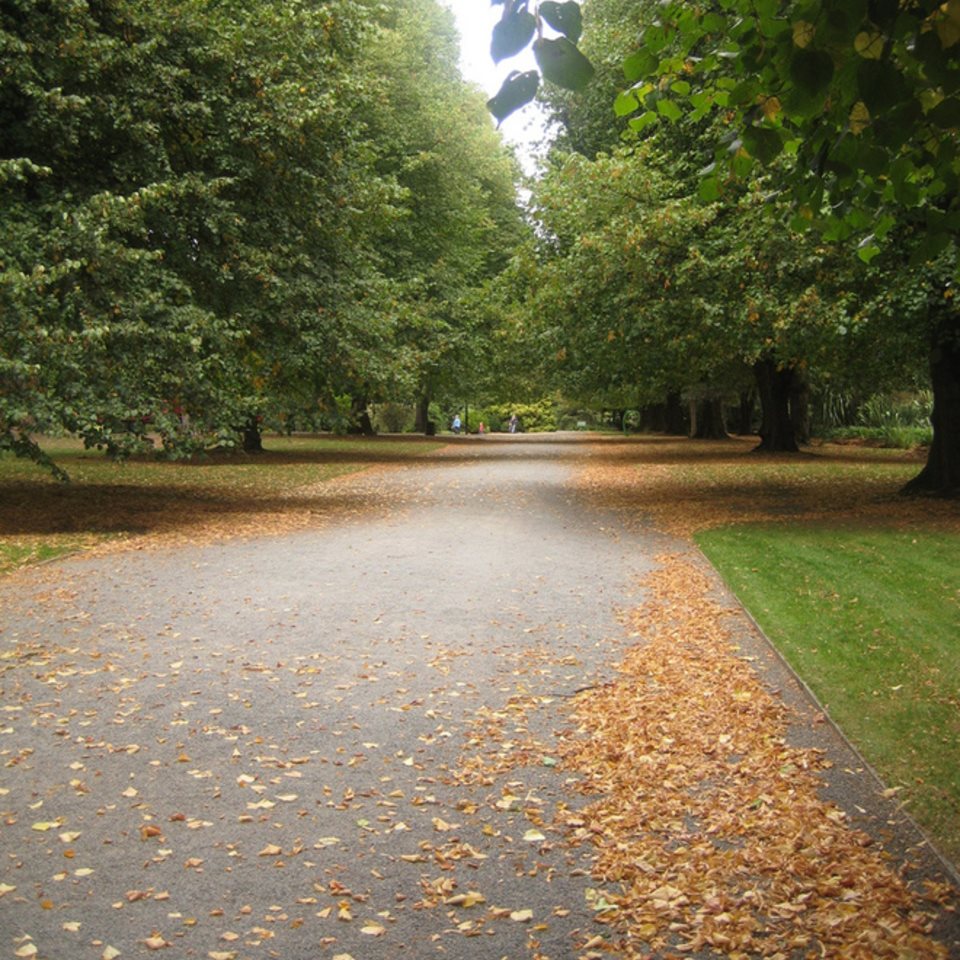 The Christchurch Botanic Gardens are the jewel in the crown that is our wonderful Hagley Park. On display there are a huge selection of interesting plants and flowers, both around the grounds and inside the numerous conservatories. When my kids were younger, the Gardens were also a great place to take the family, be it picnicking on the lawns or letting them loose in the playground.

What some people may not know is that cycling is actually banned within the gardens themselves (courtesy of the 2008 Council Parks and Reserves Bylaw). You either have to get off and park, or walk your bike if going through, or take one of the routes around the periphery. Personally this is most frustrating if visiting the new Ilex Visitors Centre, which is more than 200m away from the nearest (legitimate) bike parking; the ultimate irony was that some months ago the City Council undertook a big consultation meeting there about the Major Cycleways…

I gather that a new “spatial planning” exercise for the Gardens is getting underway; no doubt in due course there will be some public consultation on the initial thoughts. The last review of the Botanic Gardens Management Plan was way back in 2007, and I note that this Plan doesn’t even mention cycling once. So, given the current interest in all things cycling in Christchurch, it’s probably worth reviewing how the Gardens fit into this.

So why the current restriction? In banning biking and some other things like playing sports and climbing trees (oops, our kids might have done that one…), the Council Bylaw notes that “the Botanic Gardens were established in 1863 and possess a collection of exotic and indigenous plants, many of which are rare, and, as such, require a higher degree of protection than other reserve areas”.

I can appreciate the thinking here; however, most of the plants that are of greatest concern are either protected in buildings or located well away from the main pathways. It’s interesting too that the current arrangement does allow some vehicles in the Gardens, in the form of guided tours on the “Caterpillar” electric vehicles.

Now obviously the Caterpillars don’t go making their way down every little gravel track in the Gardens. So what about just restricting the use of bicycles to just the main sealed paths in the Gardens? I’d have no real problem either with specifying a maximum speed limit (15 km/h?) and a requirement to give priority to pedestrians. The main path widths are all fairly generous anyway (typically at least 5m), so there isn’t likely to be major dramas as a result.

The one part of the Gardens where you can legitimately ride a bike is to the south of the Avon River next to the Hospital; although at present there’s not a well formed cycling route throughout (although that hasn’t stopped us from using it before for the Winter Solstice Ride – hope to see you there on Tuesday!). A few years back, the District Health Board and the City Council did a land swap so that the Hospital had a better shaped piece of land for their current redevelopment. The net result is that Council now has most of the land by the river, and has more ability to create an upgraded pathway connection through here. This would avoid the current hassle for riders approaching town along the Riccarton Ave northside path whereby they either have to cross to the southside and back again or run the gauntlet of the non-existent on-road cycle lane to Oxford Tce. A path would still have to cross hospital land to access the bridge onto Rolleston Ave, but that should be less of an issue (at least CDHB are now aware of the potential desire line).

We also have a number of other cycling connections of varying quality around the periphery of the Gardens that could also do with improvements. For example, as mentioned previously, the path in front of the Gardens on Rolleston Ave sees a lot of conflict between recreational and utility users. Accessing the Gardens from the north side by Lake Victoria also involves fairly rough roads or paths to get there. And, as always, a bit more bike parking at key locations would be welcomed (and well positioned – see photo).

The Botanic Gardens are an important treasure for the city, and also a well-loved walking environment. It’s important that we preserve it for future enjoyment. But, with careful controls in place, there’s no reason why it can’t also be a useful cycling link too.

Should biking provision in and around the Botanic Gardens be improved?

3 thoughts on “Should Cycling be allowed in the Botanic Gardens?”